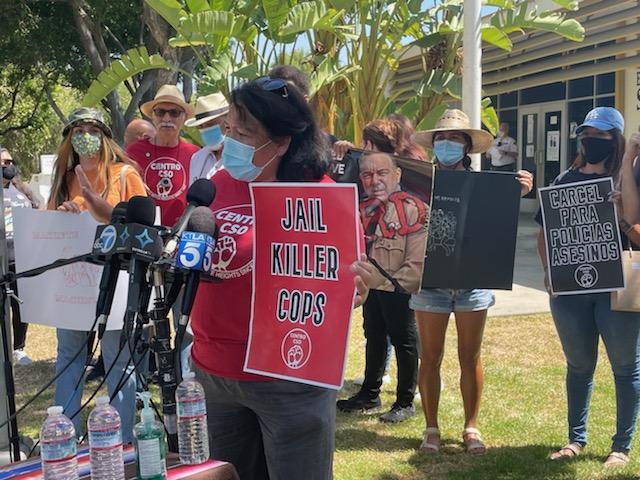 Los Angeles, CA – Local activists with the Chicanx Moratorium Committee and families who have lost loved ones to LA Sheriff’s killings held a press conference on August 5, to denounce Sheriff Villanueva, call for his ouster and urge participation in a protest on August 29.

The news conference announced details of the 51st Chicanx Moratorium March and Rally in East LA and Salazar Park. Plans are to assemble at Atlantic Park at 10 a.m. for a kick off rally, then a march on Whittier Boulevard to Salazar Park. The park is named after slain Los Angeles Times and KMEX journalist Ruben Salazar who was killed by a tear gas missile projectile shot at his head by a deputy sheriff on August 29, 1970.

On the heels of the Black Civil Rights, farmworkers and Brown Berets movements, the Chicano Moratorium became the largest Chicano anti-war and social justice protest, drawing over 30,000 participants, including Black and Japanese Americans protesting the high casualty rates of death of Chicanos. It took place 51 years ago on August 29, 1970. That day, without notice, approximately 500 LAPD police and the LA deputy Sheriffs, already in wait, descended upon the crowd and went on a bloody beating spree.

Sadly, over the past 51 years, not much has changed for Chicanos living in East Los Angeles. Racism and police abuse have been a part of the area’s ugly history. In 1992 the Koltzc Commission reported that East LA and Lynwood Sheriffs’ gangs, the Banditos and Vikings, targeted Chicano youth. LA Deputy Sheriffs have also been reported for harassing Black and Chicano grieving families whose kin have been killed by them in recent years. This includes spying, making demeaning remarks, and following and harassing them.

This deadly history against Chicanos still persists under the leadership of Sheriff Alex Villanueva, who openly has attacked the families, the all-women LA Board of Supervisors (BOS), and the Civilian Oversight Commission (COC). The community, BOS, and COC, and the LA County Democratic Party have called for Sheriff Villanueva to be removed from office.