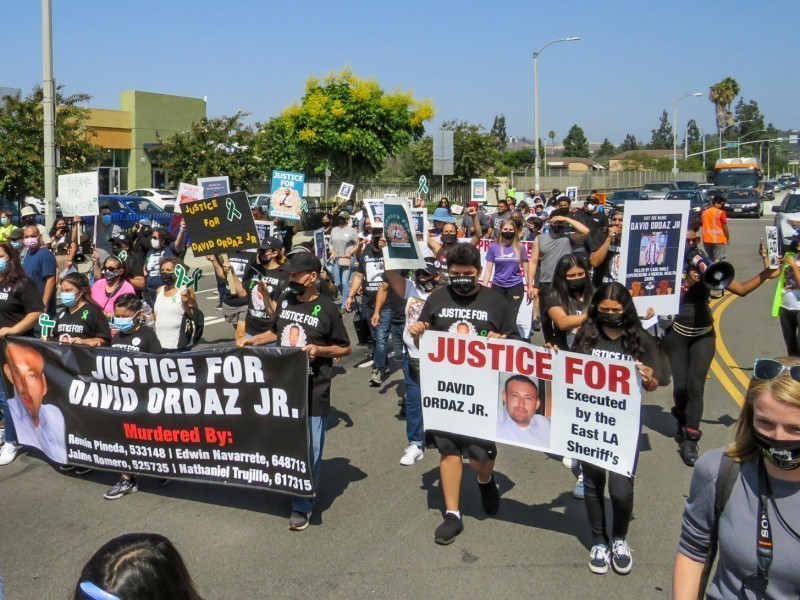 Los Angeles, CA – On September 18, the family of David Ordaz, Jr. held a march and rally calling for Mental Health awareness in honor of David, a 34-year-old father of three who was killed by the East LA Sheriffs on March 14, 2021. Ordaz, Jr. was having a mental health crisis, but the ELA Sheriffs responded by killing him in front of his family.

The protest began with a brief kick-off at Belvedere Park gym on Chavez Avenue where Ordaz Jr. loved to work out, before protesters marched down Cesar Chavez and Mednik Avenues to the park’s lakeside bandshell stage, across from the East LA Sheriff’s Station. As Ordaz, Jr. was murdered during a mental health crisis, his family not only demanded justice and accountability for him, but also greater resources, awareness and understanding of mental health issues. Centro CSO and Say Their Names-LA helped provide organizing support.

On March 14, the family of David Ordaz, Jr. called 911 to get him help as he was under mental distress and talking about suicide. ELA Sheriff’s deputies –including Remin Pineda, Edwin Navarrete, Jaime Romero, and Nathaniel Trujillo – arrived at the scene outside of the Ordaz family home in East Los Angeles. The ELA sheriff’s station – the home of the Banditos gang – is known for its aggressive violent behavior and long history of killing Chicano men. Although they were aware of Ordaz Jr.’s mental state, the deputies gunned him down as his family watched in shock. While the department says that Ordaz Jr. charged at the deputies with a knife, footage recorded by a neighbor shows that he did not pose a threat.

In their speeches, the Ordaz family described the pain caused by the East LA Sheriffs and their journey to speaking out. Hilda Pedroza, sister of Ordaz Jr., said “Seeing my brother being murdered by the police was very traumatizing, and it really messed with me. Somebody asked me, why didn’t we do anything before? Why did we wait until six months to protest? Personally, I wasn’t ready for it. We needed to mourn what we could and I personally needed to take care of my own mental health.”

Emily, the daughter of Ordaz Jr., spoke of the injustice of her father’s murder. “We shouldn’t have to be here, this is wrong. I’m barely 15, turning 16 in November and my siblings are 9 and 11. And we have to spend the rest of our lives without my dad and that’s wrong. Because of these officers, I know that one officer has children and he got to spend Father’s Day with his kids, and that’s wrong, because my dad didn’t get to do that,” she said.

The rally at Belvedere Lake opened with Aztec Danzantes, a moment of silence, and an art therapy exercise. Sol Marquez with Centro CSO and Felipe Findlay helped introduce the speakers. Then the families of victims killed by police from across the Los Angeles-area spoke. Relatives of Feras Morad, Fermin Vincent Valenzuela, Donte Jordan, Ernie Serrano, Nicholas Burgos, Sawani Toussaint, Alex Flores, Anthony Vargas, and Marco Vazquez Jr spoke. Many of these families highlighted how their loved ones died in similar circumstances as Ordaz Jr. as they required medical assistance but were instead confronted by killer cops.

Along with these families, organizers in the fight for police accountability spoke in support. Luis Sifuentes of Centro CSO called for community control of the police. Joseph Williams of Black Lives Matter-Los Angeles explained the campaign to kick police “unions” out of the LA County Federation of Labor. Eunisses Hernandez of La Defensa described the resources that exist for families impacted by police violence. Esther Lim, Justice Deputy of Los Angeles County Supervisor Hilda Solis, communicated Solis’ solidarity with the families killed by LASD and the Board of Supervisors motions to hold the LASD accountable.

The Ordaz family has filed a federal lawsuit against four of the deputies involved in the killing. They also call for reforming LASD, in particular their response to mental health crises.

Centro CSO is part of a wider effort at justice and police reform by participating in the Check The Sheriff Coalition and calling on people to participate in the fight for community/civilian control of the LASD. Centro CSO also fights for the demand of families to prosecute killer cops and to disband the LA Deputy Sheriff’s gangs.