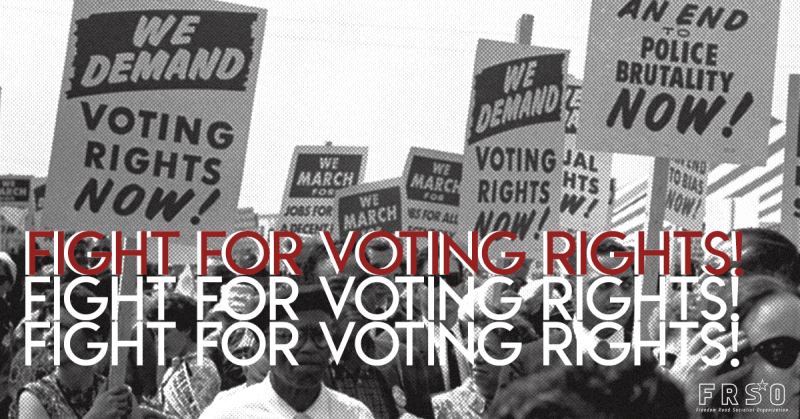 Ever since the Supreme Court conservative majority weakened the 1965 Voting Rights Act in 2013, Republicans and the right wing have tried to pass more and more legal restrictions on voting. The main aim of these efforts is to suppress the votes of African Americans, who have long fought the racism and reaction of the modern Republican Party. These efforts redoubled in the wake of the 2020 elections with Donald Trump’s loss in the presidential race, and the election of one African American senator from Georgia. Trump and his allies’ lies about voter fraud have merged with this campaign for voter suppression. Their goal is not just to try to win elections in 2022 and 2024, but to lay the basis for trying to overturn future elections if the outcome is not to their liking. Disenfranchising as many African Americans, Chicanos and other oppressed nationalities is at the center of their efforts to turn the clock back.

The struggle for voting rights has been part of the fight for democracy in the United States for more than 150 years. After the Civil War, during the Reconstruction, African Americans winning the vote gave rise to some of the most progressive legislation of the time. The struggle to abolish slavery and win the franchise, or right to vote, for Black Americans helped fuel the fight for women’s suffrage. And the Civil Rights movement of 60 years ago, of which voting rights was a central part, sparked struggles by Chicanos and other oppressed nationalities as well as the fight against the imperialist war on Vietnam, and the strengthening of the environmental movement. The fight for equality for women, the struggle for LGBTQ rights, and many other progressive movements grew in the wake of the Civil Rights movement.

While the right wing was roundly defeated in the 2018 and 2020 elections, their decades-long campaign to pack the courts with right-wing judges is paying off. In June of 2020, the Supreme Court upheld two of Arizona’s voter suppression laws, giving a green light to similar bills in many other states.

While some people who wish to marginalize the people’s movement try to pit voting rights against mass struggles, the fact of the matter is that people in the streets helps the struggle for voting rights. The Voting Rights Act of 1965 came after ten years of mass struggle against segregation and for voting rights. In 2020, voter registration picked up after the wave a mass actions, including urban rebellions and many acts of civil disobedience after the murder of George Floyd.

It would also be wrong to pit the struggle for voting rights against our fight for socialism. As the Russian revolutionary V.I. Lenin said, “we are obliged for that reason to expound and emphasize general democratic tasks before the whole people, without for a moment concealing our socialist convictions.” [“What Is To Be Done?”, page 102, italics in the original]. Community control of the police and voting rights are both democratic demands, made even more important here and now because they are also demands of African Americans and other oppressed nationalities, who, along with the working class, make of the core of the struggle for socialism in the United States.