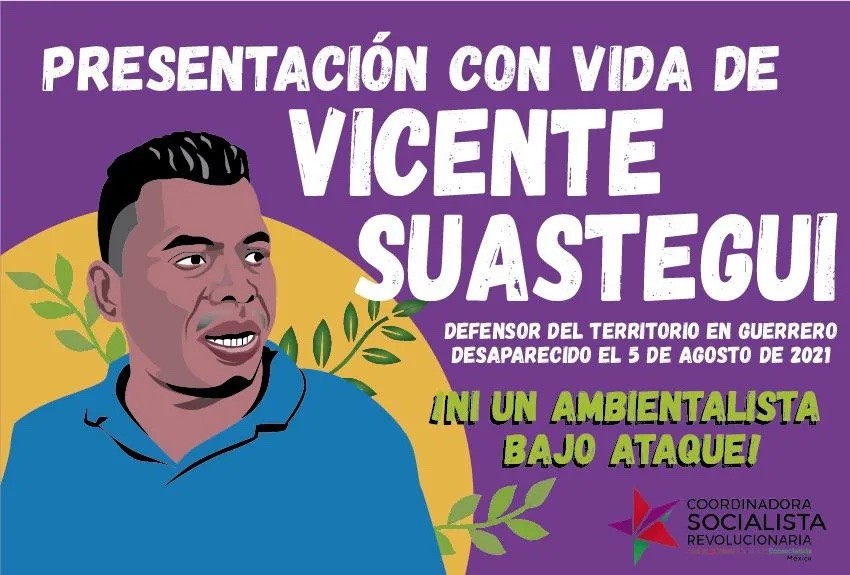 On August 5 of this year, Vicente Iván Suástegui Muñoz was forcefully disappeared at the hands of an armed group of commandos that kidnapped him in the Renacimiento Neighborhood of the municipality of Acapulco, Guerrero, Mexico.

Vicente Suástegui is a member of the Council of Ejido Collective Farms and Communities Against the La Parota Dam (CECOP). Since 2003, the CECOP has defended the Papagayo River and successfully fought against the damage the dam would do to 24 indigenous and rural communities. In addition to affecting five municipalities and displacing more than 25,000 persons, the dam would indirectly affect 70,000 more people.

Different organizations from the popular movement, defenders of national and international rights, legislators from state congresses and Mexico’s national Congress, and members of the federal government have demanded that Guerrero state authorities carry out measures to ensure Vicente’s liberation. But the results have been almost nil.

The CECOP has pointed to possible collusion of the current director of Guerrero state’s Ministerial Police, Esteban Maldonado Palacios, in Vicente’s forced disappearance, and has also denounced the ongoing harassment of his family.

For this reason, we demand that the federal government take over and thoroughly investigate the case, using all the means and resources at its disposal, and that Vicente be freed and all those responsible for his kidnapping be brought to justice.

We call on the people of Mexico, popular and democratic organizations, human rights defenders and their organizations to reinforce the actions that will make it possible for Vicente Suástegui to return home.

They took him alive; we want him back alive!

This letter and petition was published on the website of the Coordinadora Socialista Revolucionaria (CSR) of México on August 31, 2021 here