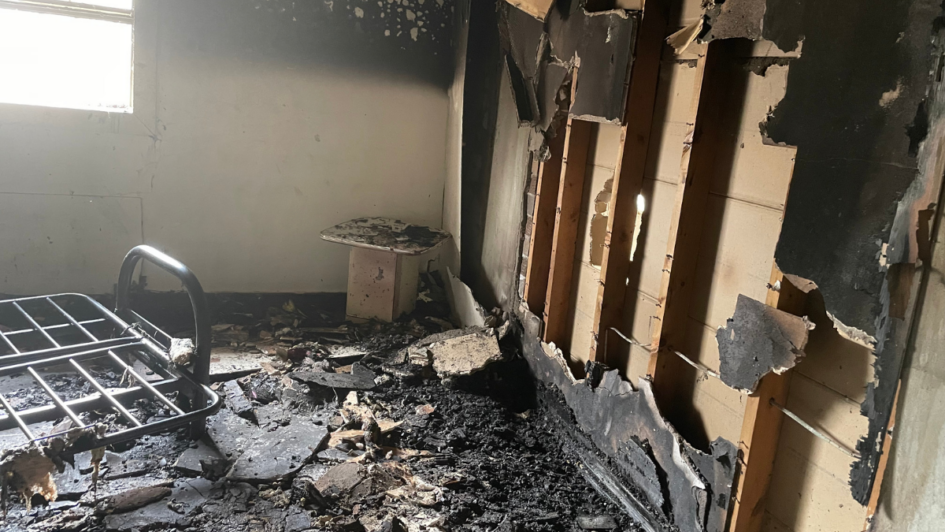 On the night of Feb. 25, a fire started in a unit of a small apartment building in the westside of Atlanta, in the Vine City and English Avenue neighborhood. Over a dozen fire trucks responded to the call and were able to contain and extinguish the fire. Damage was done to the units on the west end of the building. All the residents were unharmed and have moved back into their units.

The fire is the most recent event in a difficult history for the residents of 412 James P. Brawley. Over the past six months, the building’s tenants have suffered illegal eviction attempts by the landlord, mounted defenses against evictions, and joined forces with neighbors and community organizers against the gangsterism of the slumlords and their lackeys.

It is currently unknown who set the fire at the apartment on James P. Brawley. One tenant, who wished to remain anonymous, stated to Liberation at the scene that they would not rule out the possibility of an intentional arson to drive out the tenants.

The night of the fire, around 10 p.m. Ms. Whitmire was alerted by someone knocking on her door, yelling to get out and that there was a fire. She and her family evacuated the building and joined the other residents outside. Roughly 20 neighbors gathered outside the building. Out of six units in the apartment building, only three units are currently occupied. The occupant of the unit where the fire started was away at the time of the fire.

The fire started in an upstairs apartment unit and quickly spread into the now-unoccupied unit next door. Residents reported seeing flames bursting out of the windows of the upstairs units. Until very recently, the unit belonged to resident Fred Simmons, known as Mr. Fred. He worked at Grady Hospital in Atlanta for over 30 years. Last fall, he fell ill and had been living alone in his apartment. He died alone, before any next-of-kin could come to his apartment.

Due to the fact the apartment is severely not up to building code standards, it is very possible the damage from the fire could have been far worse, and lives could have been lost.

History of landlord abuse at the complex

For years, tenants at 412 were taken advantage of by a slumlord who rented out an apartment building that was not at all up to code. The building is now in the hands of a new company that wants to force out the tenants with no compensation and tear down the building. For months tenants have been facing harassment and intimidation.

Organizers with the Party for Socialism and Liberation met Ms. Whitmire and other residents in September 2021 when going door to door in the neighborhood. They were talking to residents about the eviction crisis facing millions of working class people in the country with the abrupt ending of the federal eviction moratorium, and the Assist & Resist rental assistance filing program that the PSL Atlanta branch had begun weeks earlier to help tenants secure back rent.

Ms. Whitmire showed PSL organizers her apartment and the abysmal conditions within. The floors were bowed up from water damage and mold coated the walls, clothes, and furniture. The water has been cut off and the pipes are in severe disrepair. Even prior to the disconnection, not every unit had water so other residents had to come to Ms. Whitmire’s apartment for water.

Because residents had been paying their rents, the landlords chose to use harassment and intimidation to run off the tenants, hoping tenants would be ignorant of their rights. Agents of the landlord posted makeshift eviction notices that called the tenants “illegal occupants.” As is the case with tenants of many slumlords, tenants at 412 James P Brawley too were never issued formal leases, making tenants vulnerable to eviction without cause.

Just weeks prior, the property manager and her security goons kicked in the doors and threw residents’ belongings outside the apartment. They attempted to intimidate the residents into leaving the complex, but the residents were resolute.

Several times since last summer, the landlords have attempted to evict the tenants. In September 2021, a notice was posted on the door of one of the residents saying all the residents were to leave by a specific date. When the day approached, tenants and a contingent of PSL organizers joined forces to physically defend the homes, if it came to it, anticipating another altercation with the property manager, hired private security, or the police.

For hours, the group stood together outside the apartment with signs and banners that read “Stop the Evictions! Housing is a Human Right,” “Slumlords out of Atlanta!” and spoke with local media about the crimes against the residents. Individuals, identified by a tenant as being a part of the landlord company, slowly drove by the complex but did not stop.

An organized act of solidarity helped the tenants evade eviction that day.

Several weeks later, the landlords threatened eviction again. PSL organizers stood with the residents of 412 again. This time, the landlord’s representatives attempted to confront the tenants but were repelled by the solidarity of the group. At the end of the day, the residents remained in place.

Fed up with the mistreatment, residents had begun withholding rent payments. Following the recent fire, on this subject, Ms. Whitmire said “They [the landlords] say okay, we’re not getting no money anymore. They’re pissed off y’all.”

In January, the landlord sent workers to board up the windows of both the unoccupied and occupied units, with the property manager and a private security goon overseeing the process. PSL organizers along with tenant Whitmire confronted the atrocity.

Just weeks before the fire, PSL member Leela Anand raised alarm regarding windows of units still occupied by tenants being boarded up with wood. She said to the property manager, “This is a fire hazard. What will you do if there is a fire? The residents could burn alive in there. You have no concern at all for human lives.”

Just days earlier, fire at the Twin Parks apartment in Bronx, NYC, had killed 17 people; a long history of landlord neglect and exploitation was to blame.

Boards were removed off the windows of occupied units at apartment 412 after questioning and demanding. That was the last interaction between the tenants and the landlords prior to the fire.

The housing crisis in Atlanta

What the tenants at James P. Brawley are facing is far from unique. Atlanta’s development has been marked by Black working class neighborhoods being steamrolled for the benefit of the city’s business tycoons. Atlanta landmarks such as the Centennial Olympic Park, its baseball stadiums — Turner Field and Fulton County — all were constructed on top of poor Black neighborhoods, their populations dispersed and uncompensated. Much of the east side of the city has been gentrified over the last two decades.

Currently, the west side of Atlanta has been the target of redevelopment and gentrification. Property values have risen in the neighborhoods surrounding the Mercedes Benz stadium.

Slumlords are doing everything and anything to cash in on the properties they’ve neglected for years. They are taking extreme measures to push out tenants via illegal evictions. The capitalist economic system puts the profit-seeking interests of the landlords, developers and corporations first, so there are essentially no protections for longtime residents of Atlanta’s working class neighborhoods.

While gentrification has a long history in U.S. cities, the pace and impact has been magnified by COVID-19. Working class people who had long held out against the siege of hostile redevelopment are finding it harder and harder to make ends meet. The people hardest hit by the economic recession triggered by the pandemic are the ones least easily able to receive benefits, and thus are most at risk of losing their homes.

The rich are using the devastating economic blow to the working class as a chance to scoop up land and recreate the city in their image.

But across the country, tenants like Ms. Whitmire are outraged at the injustices, refuse to give up, are getting organized and uniting with others to fight back against the menace of evictions, slumlords, and gentrification.

The Sudanese Revolution is in danger

US ‘Striketober’ puts class struggle in the spotlight

U.S. puts Europe in the trenches against the invented enemy