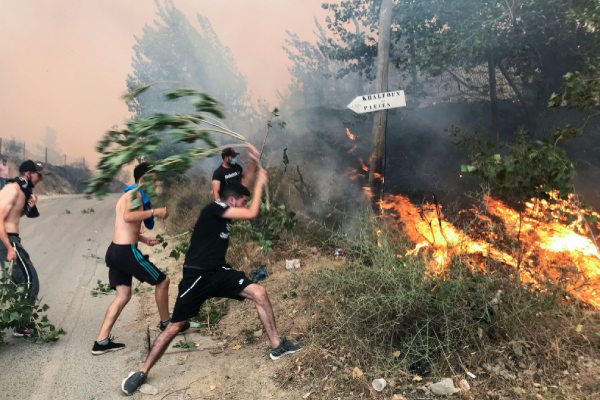 Fires have torn through the US state of Colorado leaving up to 1,000 homes destroyed and two people missing.

The blaze is thought to have been caused by a lack of winter snowfall and an unusually dry autumn—both of which are likely to result from climate change.

Louisville resident, Rex Hickman, whose home was destroyed, said, “There’s a numbness that hits you first.

“You know, kind of like you go into crisis mode. You think about what you can do, what you can’t do.”

“The real pain is going to sink in overtime” he added.

In recent years forest fires scorched the planet from Greece to Australia. Wildfires in Turkey were described as the worst in decades.

In Siberia fires pumped out the equivalent of around 505 megatonnes of carbon dioxide.

The startling increase in wildfires across the globe is the result of dryer weather and unusual heat waves.

But wildfires are not the only devastating extreme weather event becoming more common due to warming temperatures.

A new report published in the journal Nature Geoscience has found that climate change will increase the reach of tropical cyclones. This includes hurricanes and typhoons. For the most part, tropical cyclones predominantly occur around the equator.

But scientists warn that global heating means this won’t be the case forever.

The report says that heavily populated major cities like New York, Beijing and Tokyo are more likely to be devastated by these extreme weather events.

Scientists have warned for some time that rising temperatures are likely to mean more hurricanes and typhoons.

But this new report makes it even more explicit that climate change caused by human activity is at fault for a rise in deadly cyclones, typhoons and hurricanes. Last year saw unprecedented levels of environmental destruction, causing ­widespread death, displacement and misery.

It has been estimated that around 20 million people are forced to leave their homes every year due to the impact of climate change. And this figure is set to rise.

The crisis also has a financial cost. According to research by Christian Aid in 2021, climate change caused £120 billion worth of damage.

Most ordinary people agree that climate change poses a massive threat and are angry that those in power continue to do nothing.

A poll conducted by the Centre for Climate Change and Social Transformations and Ipsos MORI, found that 84 percent of people in Britain are concerned about climate change.

This is a marked increase from when the poll was conducted in 2016.

Back then just 60 percent were concerned about the climate crisis.

In 2022 socialists must take people’s justified anxiety and fears about climate catastrophe and turn it into action in their workplaces and on the streets.

The North London Waste Authority (NLWA) voted in favour of the expansion of the Edmonton incinerator on 16 December.

The decision comes despite the tireless campaigning of many activists and community groups across north London who have organised protests against the incinerator.

Extinction Rebellion activists blockaded all the entrances to the incinerator plant in December.

Some were arrested after operations of the plant were successfully disrupted for the day.

Due to pressure from protesters, the leader of Haringey council was forced to break from the other six remaining councils in calling for a “pause and review” of the expansion.

About 70 protesters lobbied an NLWA meeting in Camden as councillors voted on expansion.

Speakers declared that if the NLWA fails to do the right thing, they will be faced with more occupations of the road that runs past the incinerator. They also made it clear there would be more blockades of its entrances and further disruptive civil disobedience to stop the rebuild.

Of the 14 councillors on the NLWA—two from each borough—12 voted in favour of expansion despite the overwhelming evidence of the environmental impact of incineration.

We are witnessing a profound clash between the corporate interests behind the expansion and a lack of local democracy.

Councillor Clyde Loakes blamed the residents of north London for not recycling correctly as his defence of incineration.

If the construction of the incinerator goes ahead it will emit 700,000 tonnes of carbon dioxide per year and more toxic emissions.

The contracts are to be signed on 18 January.

Campaigners know that this is just the start of the fightback against the Edmonton incinerator.

The campaign is determined to stop the NLWA from getting away with its endeavour.

More actions are planned for the new year.

Cops said they arrested him for turning around at a checkpoint, but the real reason is much worse