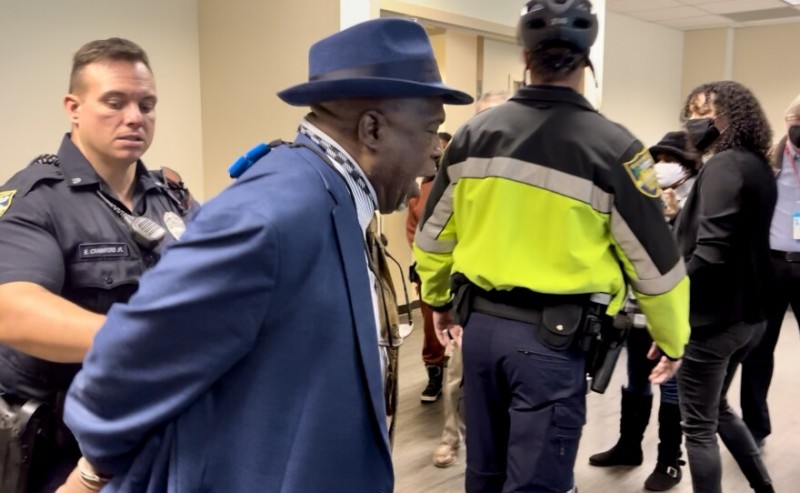 Jacksonville, FL – Jacksonville residents angered with Governor Ron DeSantis’ handling of the pandemic and other issues showed up to make their voices heard on Tuesday morning, January 4, just before the governor was scheduled to conduct a press conference in Jacksonville.

Ben Frazier, a seasoned civil rights activist with the Northside Coalition of Jacksonville (NCOJ) and pioneering Black journalist, stood in the room inside the state office building where the governor was due to speak and ended up in a heated exchange with some of the governor’s aides. Other activists present included members of the Jacksonville Community Action Committee (JCAC), Florida Rising, Jacksonville Progressive Coalition and other community members.

As a uniformed policeman stood by, the facilities manager stepped in and requested to see everyone’s press credentials. The facilities manager claimed that while the press conference was being held in a state building, they did private business in some places and ordered everyone who was not with the media to leave the room or face being trespassed from the property. The gathered activists and community members vocally objected, stating that they would not leave.

Maria Garcia, an organizer with the Jacksonville Community Action Committee was one of those in attendance who said they came to voice their concerns and ask the governor some questions. She spoke up during the exchange with Frazier and Governor DeSantis’ aide, saying, “We’re here representing the community that y’all have let suffer because you keep ignoring this pandemic. And that’s really what’s disrespectful. And I’m sorry that we’re being disruptive or whatever. But it’s been disruptive to our lives. The fact that we’re here having to go to work, don’t know if we’re going to catch COVID, don’t know if we have it, can’t get tested, all the funds are drying up. There’s no state facilities to get tested. That’s disrespectful. That’s why we’re here.”

The tense discussion continued until Frazier was led out of the building in handcuffs and placed in a police cruiser.

Before Frazier was handcuffed, aides took away the podium and other items for the news conference, prompting a chant from the audience: “When it comes to public welfare, this governor does not care.” As he was handcuffed, Frazier and activists repeated the chant. After the removal of activists and other community members, DeSantis held a news conference with state health officials elsewhere in the building.

Individuals recorded the encounter with the Jacksonville Sheriff’s Office, and confirmed Frazier was being charged with trespass after warning, a misdemeanor offense. After receiving a citation to appear in court, he was released.

“The wealthy took their best shot at us, and we beat them. Again.” Kshama Sawant Speaks At Solidarity Campaign Press Conference

India farmers win! After year of protest, gov’t backs down