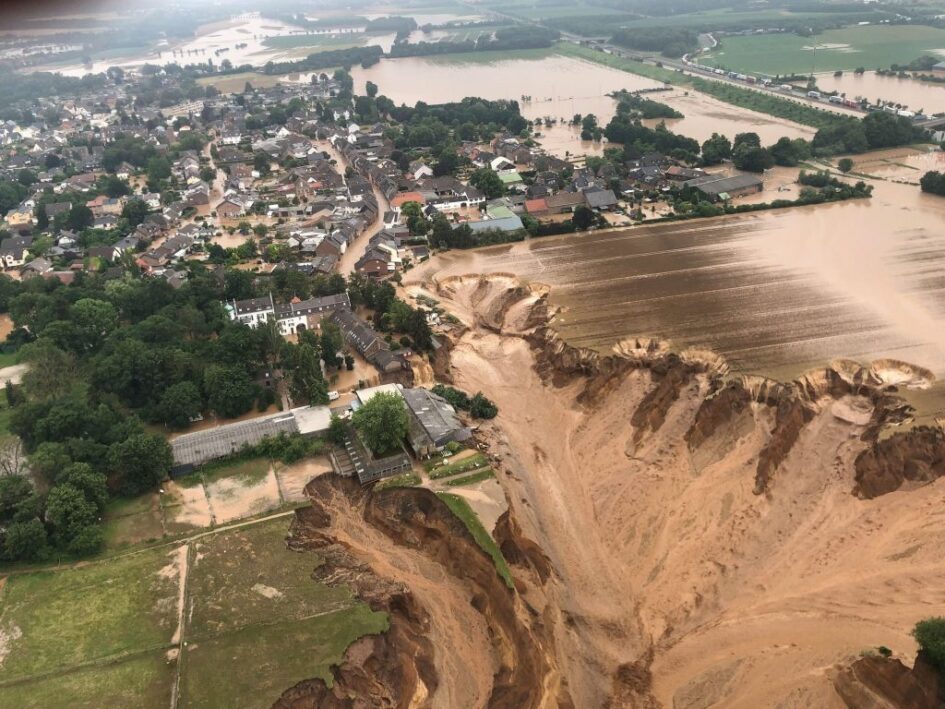 From the 14th July, after a week of intense rainfall, floods began across Central Europe, in particular in Western Germany. As of writing, over 180 people have died in the floods, many more are still missing. In this article Mark Bergfeld, trade unionist and climate organiser, discusses these latest floods.

I grew up in Erftstadt, went to school in Kerpen and played soccer (ages 6-19) in most of the towns and villages hit by the floods. I was also a local council candidate and have been part of progressive mobilisations in the area.

The flooded areas of the Rhein-Erft Kreis and in particular Erftstadt are both historically and economically intertwined with lignite coal mining, one of the dirtiest fossil fuels. All lakes in the region are former opencast coal mines and Garzweiler still is operational today.

Most of my friends’ dads worked for the energy company RWE and many young guys in the area still regard it as a good employer which affords them a decent life. When I was in school we would regularly visit the opencast coal mine down the road to learn about lignite.

The lignite mining industry shapes not only our cultural identity, career aspirations and education system but also our political representation. Gregor Golland, a member of the Christian Democratic Union (CDU), earns 120,000 Euros for his part time job at RWE whilst also being the representative in the North Rhine-Westphalia state parliament.

RWE’s political and economic power are a major obstacle to moving toward carbon neutrality and shifting away from fossil fuels. Unfortunately, the German federal government will only end coal production in 2038. This planned coal production constitutes a breach of the Paris Climate Agreement.

The devastation that Erftstadt and other towns in the regions are seeing is not due to technical issues but human-made climate change. However, there is a technical issue at hand which cannot be neglected.

The dams are breaking because they haven’t been built for such scenarios. The little streams have turned into rivers because they have been straightened and people built their houses on the banks. Such ‘technical issues’ need to be addressed in Erftstadt and across the European Union (EU).

Importantly, there is a political dimension to this man-made disaster. The EU Commission has put forward its Fitfor55 package. It offers too little, too late, and Germany is putting its car and coal industries before human lives in Erftstadt and elsewhere.

Erftstadt will never be the same after this. Towns like Blessem stand in ruins. The collective trauma can be witnessed already. Politicians are gearing up for the federal elections in September by promising money for home owners and those affected by the floods.

But in the cracks and amidst the ruins old social networks are being reactivated and new mutual aid networks are emerging. I don’t know whether they will be strong enough to dislodge the power of the CDU and RWE. But they sure will be important for others when catastrophe strikes again.

On Friday, the CDU chancellor candidate and North Rhine-Westphalia prime minister Armin Laschet was interviewed by a journalist on national television. In the interview he said ‘listen up young lady’ and continued to state that he wouldn’t be changing his politics because of these events.

His remarks to the woman journalist show how much he disrespects women. This behaviour is reminiscent of how Donald Trump spoke to women journalists.

The fact that he won’t change his politics is typical of the CDU as a whole. During the Merkel era, the CDU was able to move into the centre because Merkel responded to events like the widely publicised case of Reem, a refugee child crying after speaking to Merkel, by moving into a more liberal rhetoric. Laschet has shown himself incapable of displaying such political initiative for national politics. Instead he only represents his narrow sectional interests and is unwilling to shift his rhetoric or politics despite the situation calling for it.

Yesterday, Armin Laschet was caught laughing his ass off in the background of a television interview with German President Frank-Walter Steinmeier of the Social Democratic Party (SPD). Since then the hashtag #LaschetLacht has been trending.

The video shows Laschet in ‘schoolboy’ mode joking around with his CDU friends who have been controlling politics in the Rheinland for decades by building coalitions with big employers such as e.on and RWE.

Laschet has now apologised on Twitter, but not for his behaviour or to the people of Erftstadt – only for the impression he created. This shows his general disdain for the voters and how he takes their votes for granted.

If Laschet were to be elected Chancellor in September, it would be a disaster for the people in Erftstadt, in Germany, Europe and the world.

The challenges we as humanity face are too big for this schoolboy who disrespects women and the general electorate, and who denies climate science. Time is of the essence when it comes to tackling climate change and rampant inequality. Laschet and his CDU don’t have an answer but are a conservative bloc opposing any progressive change within the realm of parliamentary politics.

Greta Thunberg has consistently said that politicians should listen to climate scientists. In September, the German electorate should punish all those who have been denying climate science or putting the coal and car industry’s interests above people and planet.

It requires equitable solutions to the climate crisis. This means folks need green union jobs that provide them with a strong occupational and cultural identity that lignite and the car industry once provided. That is a small piece of the puzzle that will need to be addressed.