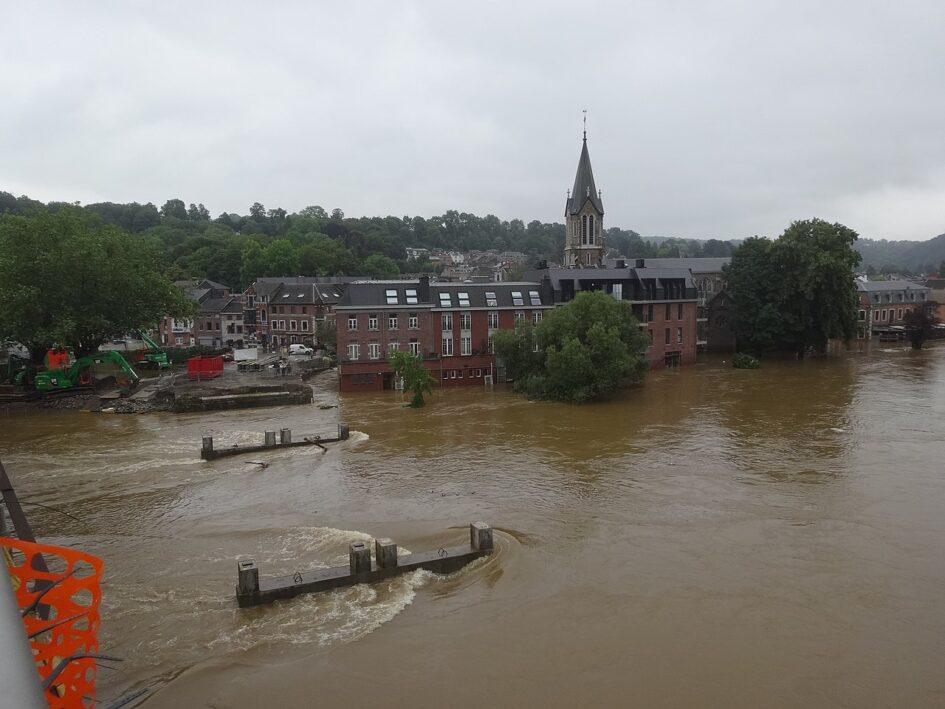 At the time of writing (17 July), the terrible floods in Belgium, parts of Germany and the Netherlands have killed more than 100 people. (1) Tens of thousands of people have been displaced, have lost everything and will remain traumatised forever. Others were not even that “lucky”, unfortunately, and the large number of missing persons (1300 in Germany) leaves no doubt that the final toll will be much, much higher. The material damage is immense, not to mention the impact in terms of water and soil pollution (by hydrocarbons, heavy metals, PCBs, plastics, sewage, etc.).

This disaster is almost certainly a manifestation of climate change caused by greenhouse gas emissions (mainly from burning fossil fuels). Ultimately if this were an isolated event, there would be some doubt. But this is not an isolated event, quite the contrary. Firstly, this exceptional rainfall follows two years of equally exceptional heatwaves and drought (remember: the heatwave of 2020 caused 1400 deaths in Belgium…). Secondly, the fact that this deluge in Western Europe coincides with a deadly and unprecedented heat wave in Canada (British Columbia) is not a coincidence: it is highly likely that the two phenomena are linked and result from the disturbance of the circumpolar jet stream (powerful winds that rotate at high altitude around the pole). Thirdly, the increase in extreme weather events (more violent storms and cyclones, more intense heat waves and cold waves, unprecedented droughts and fires, rain, floods and mudslides, etc.) is indisputable and corresponds perfectly to the consequences of global warming as projected by the IPCC since its first report … more than thirty years ago.

The meteorological services of the countries concerned had diagnosed the presence over our regions of a “cold drop” — an isolated and stable low-pressure system associated with a cold air mass. This type of phenomenon is known to cause heavy rainfall. We know that this precipitation can last for several days, as the depression is stationary. In this case, the threat was all the more serious because the “cold drop” was surrounded by huge masses of warm air, loaded with large quantities of water vapour. As this water vapour circled the depression, it was bound to condense and fall as rain. Meteorologists and hydrologists had warned that an exceptional event was on the way. The two-three days before the deluge began could and should have been used to analyse the threat, take emergency measures, mobilise civil protection and the army, warn the population, and evacuate the most threatened homes.

This would not have prevented the floods, but the damage would have been limited and, above all, loss of life would have been avoided. Cuba’s experience with cyclones confirms that prevention makes all the difference. But here, nothing was done. Once again (as with COVID19!), warnings were ignored. The reasons are always the same: governments have their snouts in the economic trough, their priority is the “competitiveness” of companies, they refuse to integrate the fact that humanity has entered the climate catastrophe (in Belgium, while the clouds were gathering, part of the political “class” even found it more important to spread gossip about the links between Ms Haouach and the Muslim Brotherhood). (2)

A host of aggravating structural factors

In addition to this unpreparedness, the scale of the floods and their consequences was multiplied by a host of structural factors of various kinds. Let’s mention in general: budget cuts (in civil protection and the fire brigade, in particular — thank you Jan Jambon! ); the concreting of land (which prevents water from draining); the rectification of streams and the draining of wetlands (which act as a sponge); urban sprawl; the management of rainwater (which is sent to the sewer and then passes through treatment plants before flowing into rivers); land speculation (encouraging building in flood plains); agricultural policy (encouraging large-scale monoculture farming) and farming practices (deep ploughing, lack of soil cover, disappearance of hedges). (3)

In all these areas, essential preventive measures should have been taken years ago — and must be taken without delay to avoid new tragedies. But the so-called “adaptation” needed to deal with the irreversible part of climate change must not be used to avoid the root of the problem: the climate itself. We need to get out of fossil fuels as soon as possible, and to do so, it is not enough to increase the share of renewables: we need to break with capitalist productivism, to completely change our mode of production, consumption and relationship with nature, and to do so according to a public plan.

The government declares a day of national mourning, calls for solidarity and unity, but by its statements it keeps the part of the population that is not aware of climate change in the dark. The Belgian Prime Minister spoke of an “exceptional, unprecedented” event. The bottom line is that with global warming, the “exceptional” becomes the rule, the “unprecedented” becomes commonplace. We can clearly see the link between “knowledge” and “power”: stressing the “exceptional” nature of floods without mentioning the climate allows politicians to keep a monopoly on decision-making while shirking their responsibilities. Without explicitly saying so, they pass on the idea that the disaster is “natural”, when it is not.

It goes without saying that this discourse plays into the hands of the climate deniers (represented in the government by the Reform Movement’s David Clarinval, deputy prime minister, side-kick of Drieu Godefridi and the late Istvan Markó). (4)

(The president of the Reform Movement, GL Bouchez, saw fit to take issue with the link made by “some” — notably the climatologist JP van Ypersele — between the floods and global warming.)

But all the political tendencies in power have a certain interest in promoting this discourse. Talking about “natural disasters” allows the climate inaction of successive coalitions to be swept under the carpet. If the victims had a clear idea of the responsibility of the governments, the loan of 2,500 Euros per affected household (a decision of the Walloon government) would appear to them as another injustice, an insult to the victims. Instead of this loan to be repaid, the populations are entitled to demand a reparation worthy of the name, financed by the companies, banks and shareholders who continue to invest in fossils against all the odds.

Flooded and starving people all over the world, unite!

Beyond the imperative solidarity with the victims, we must learn the lessons of the tragedy, and lesson number one is that the time is short, that there is not another minute to lose. The most decisive measures must be taken as a matter of urgency to stop the climate catastrophe; otherwise it will turn into a cataclysm.

Lesson No. 2 is that we cannot trust governments: they have been telling us to do something about the climate for more than thirty years and they have done almost nothing. Or rather, they have done a lot: their neoliberal policies of austerity, privatisation, support for maximising the profits of fossil fuel multinationals and support for agribusiness have brought us to the brink. “We are all in the same boat”, say policy makers. No: in the North as in the South, the rich get away with it and get richer through the disasters for which they are mainly responsible (the richest 10% emit more than 50% of global CO2). The working classes are footing the bill, facing both worsening global warming and deepening social inequalities. The poorest pay twice, three times, when they have no other solution than to migrate, risking their lives, in the legitimate hope of a better life. Climate change is a class issue.

Lesson No. 3 is that all those who are victims of this policy — small farmers, youth, women, workers, indigenous peoples — must unite, across borders. There is no difference between the poor people wading in the water in Pepinster or Verviers and the poor people wading in the water in Karachi or Dhaka (1/3 of Bangladesh under water in 2020 due to the disruption of the monsoon by climate change!) Let’s not fall for the government’s cynicism, which will take advantage of the floods to divert attention from the undocumented migrants who have been on hunger strike in Brussels for more than 50 days, even though they are in danger of dying.

The EU’s criminal non-statement: the ”temporary overshoot” of 1.5°C

In the next few days, we will hear governments swearing that the dramatic floods confirm their desire to green capitalism, that the European Union is in the vanguard and that everything would be better if the rest of the world followed its example.

Lesson No. 4 is not to let governments put us to sleep with this rhetoric. Green capitalism is a sham. The EU’s climate plan is full of false solutions (planting trees), sleight of hand (not counting emissions from global aviation and shipping), dangerous technologies (carbon capture and sequestration, nuclear power, energy crops on millions of hectares), new colonial injustices against the South (carbon offsets, EU border taxes), and new anti-social market measures (carbon payments in the construction and mobility sectors, which companies will pass on to consumers). The real aim of this plan is to square the circle: combining capitalist growth with climate stabilisation. Its unspoken aim is the insane plan to “temporarily exceed” the 1.5°C warming threshold, compensated later by a hypothetical technological “cooling” of the planet.

The floods in Belgium and Germany, as well as other disasters around the world, suggest the nightmarish consequences of this “temporary overshoot”. On 10 October in Brussels, let’s make the climate demonstration a popular tidal wave for a different policy. (5) A policy for the common good, a democratic and social policy to meet real human needs, a careful and loving policy of borderless care for people and Mother Earth.

The article appeared on the International Viewpoint website on July 19, 2021 here.