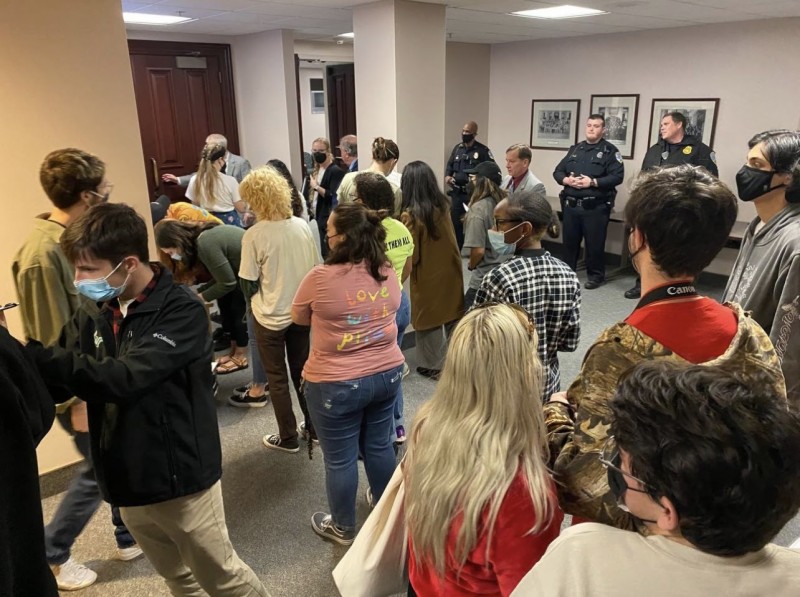 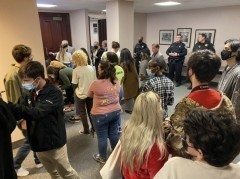 Tallahassee, FL – On January 27, members of Students for a Democratic Society (SDS) from across Florida gathered at the State Capitol to protest HB5, which is widely known as the “abortion ban bill.” 70 activists gathered on the steps of the building where the Florida House meets, including dozens who traveled from Tampa and Jacksonville to join Tallahassee activists in opposing this bill.

SDS made it clear that they view this bill as an attack on reproductive rights, women’s rights, and the right to choose what to do with your body. They and many others gave speeches to oppose it wholeheartedly.

The abortion ban bill is officially titled “HB5: Reducing Fetal and Infant Mortality.” Opposers, both within the legislature and without, have pointed out the misleading nature of the title. Members of the Florida legislature such as Representative Anna Eskamani attended the event, making clear that they united with the people’s demands to kill the bill. Gia Davila, a member of USF SDS, demanded students and community members “let these legislators know that the passing of this bill does not represent the wishes of the people.”

The bill was passed in a committee the week prior and was put to vote again on the January 27. This bill is not the first of its kind. Texas passed a similar bill, S. B. 8, banning all abortion-related healthcare procedures after just 6 weeks of pregnancy. This blatant wave of attacks on reproductive rights across the country have not gone unnoticed by student and mass activists.

Along with SDS, other organizations such as FAMU Generation Action, Planned Parenthood, Dream Defenders, Florida Student Power Network and the Freedom Road Socialist Organization were also present at the event.

Noelle Williams of FAMU GenAction stated, “Attacks on abortion aren’t the end, but they are a symptom of a system that continually creates inequity. States like Florida that attack access to abortion tend to be the same states that fail to prioritize citizens’ well-being in a multitude of other ways.”

Monica Martinez of UNF SDS brought attention to racism in the medical community. “We’ve seen the ways that the medical system has disadvantaged these communities in forcing them to have hysterectomies or not granting immediate health care,” she said. “This bill will become another way to force these already oppressed communities to continue their unwanted pregnancies.”

The protesters then entered the meeting and signed up to speak during public comment, despite efforts from House staff to limit comment. Once public comment began, the commenters were overwhelmingly in opposition, truly showing the unpopular nature of this bill. Before the public was finished commenting on the bill, the Republican subcommittee chair abruptly cut off a speaker and declared that public comment was over. This caused the SDSers, who were cut off in the middle of speaking, to chant and disrupt the meeting before they were eventually kicked out along with the rest of the public.

According to Florida law, all meetings such as these must be done “in the sunshine,” or in the public eye so as to avoid secrecy and enforce transparency. Even though some House representatives then raised that the meeting should be canceled because members of the public were not present, the chairs forced through an extension of the meeting and the Republican majority then passed the bill.

“I can’t imagine anything more terrifying to a conservative legislative body than a group of young people demanding that the needs of the working-class people, women, Black and brown Floridians, and queer and trans folks be addressed in not only abortion access, but the entire policy arm of Florida,” stated Lauren Brenzel, representing Florida Planned Parenthood. “It’s unsurprising that these same individuals tried to silence these voices after only 30 minutes of public testimony – the record shows people are against abortion bans and looking for solutions to Florida’s poor wages, lack of healthcare, and affordable housing crisis.” Brenzel and at least 50 others were forcibly removed from the committee meeting after chanting “Let us speak!” when public comment was brought to a premature end.

SDS and the other groups present continued protesting outside after being kicked out of the meeting. Upon hearing about the passage of the bill, they declared that the fight was on to kill this bill and other abortion ban bills all around the country.

“We truly showed the power of the people,” said Taylor Cook, who has been a member of Tampa Bay SDS since 2018. “They tried to shut us down but we continued to fight after being kicked out of the meeting and we will continue to fight back until our rights are protected and this bill is killed!”