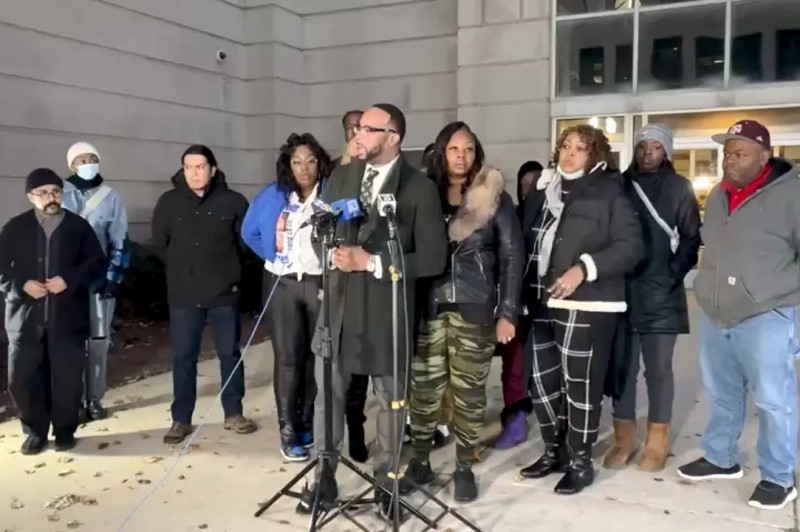 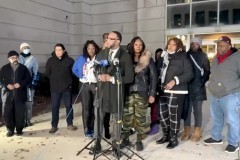 B’Ivory LaMarr, attorney for the family of Brieon Green, addresses the media after viewing footage of Green’s death for the first time.
(Fight Back! News/staff)

Alan Chavoya, outreach chair of the Milwaukee Alliance Against Racist and Political Repression, was also asked by Green’s family to join them at the DA’s office to review the footage. After the meeting, a press conference was held to discuss some of the findings.

The footage reviewed at the meeting was from a security camera inside Milwaukee County Jail, which was pointed in the direction of the holding cell where Green was placed. Less than half an hour after entering the cell, Green proceeded to use the metal cord from the telephone inside the cell to begin strangling himself. Approximately 10 seconds after Green begins to do so, a correctional officer (CO) walks by the cell, supposedly conducting a routine wellness check. The footage shows the CO simply walking by the cell, slightly turning his head in the direction of the cell. The CO spent less than a second doing this wellness check on Green. It would take another 37 minutes for a second officer to conduct the next wellness check and seek medical attention for Green. At this point, Green had passed.

Speaking at the press conference after reviewing the footage, Green’s aunt Monique Brewer said, “This was the day we’ve been waiting for, and we just wanted to know what happened. In the midst of this happening, it could have been prevented.”

Had the CO taken even a few seconds to pause and look into Green’s cell, he may have been able to save his life. Tying it into the family’s demand for transparency, Chavoya demanded the public release of all footage and the name of the CO.

From January to August, there have been four deaths inside Milwaukee County Jail. The Milwaukee County Sheriff’s Office has repeated the line that they are doing the best they can but are unable to provide adequate care due to staffing issues. As Chavoya said, “This isn’t a staffing issue. Once the second CO finds Brieon and calls for assistance, you can see a swarm of about 20 COs surround the cell. They were there, but they’re just not doing their job.”

We now know how Green died, but there are many lingering questions. Green’s family plans on reviewing the rest of the footage and documents related to the case. Furthermore, the family, together with the Milwaukee Alliance and the Justice for Brieon Green Coalition, are demanding the following:

— Fire and charge the correctional officer who failed to provide Brieon Green with lifesaving care.

— Sheriff Denita Ball to immediately meet with the family of Brieon Green to discuss policy changes that will eliminate deaths in detention.

Victory for the people: Yes on A for sheriff accountability