For Trumka, it was always “workers first” 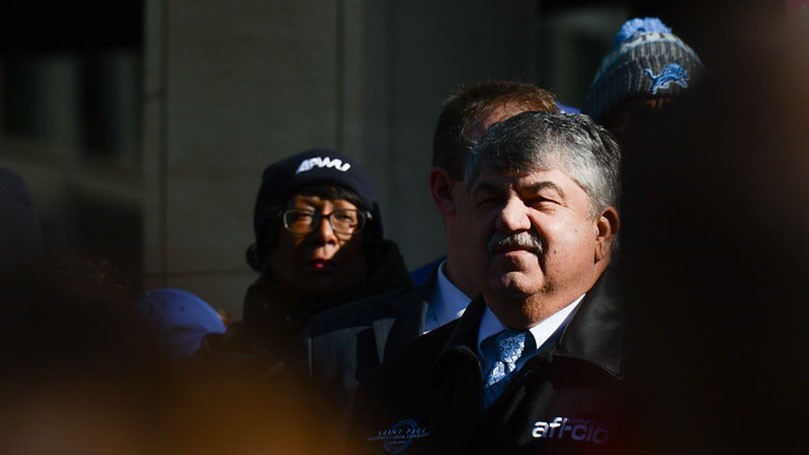 “Workers First” was a familiar line of Richard L. Trumka, president of the AFL-CIO from 2009 to 2021. He passed away at his home on August 5th. He was the first president of the merged AFL-CIO (1955) to come from an industrial union, the United Mine Workers of America. In the United States, the UMWA and the Industrial Workers of the World (IWW) birthed industrial unionism, which sought to organize workers on an industry-wide basis without distinction by craft or particular trade to contend with the explosion of mass manufacturing, and mass wage labor, and to defend workers against the rising power of the giant corporations and trusts.

Richard Trumka was a coal miner’s son. He was born and raised in Nemacolin, a small town near Pittsburgh. His father was a second-generation Polish American who worked in the mines. Trumka himself worked in the mines to pay his way through college. After earning his law degree, he became a staff lawyer for the United Mine Workers. Lawyers are weapons in the class war, and Trumka knew labor needed some weapons. He joined the reform movement in the UMWA and was a bright, progressive light in organized labor’s leadership shift leftward from the cold war stance of Lane Kirkland and George Meany. They embraced the civil rights movement for equality as inseparable from the goals of the labor movement. Together with John Sweeney, he helped bring an end to the old era and returned the federation to a more progressive program.

As president of the UMWA, Trumka led a historic nine-month pitched battle in 1989–90 against Pittston Coal that included a mass movement approach to allies and friends — and won!

In 2008, the year before he succeeded John Sweeney as president, Trumka made an extraordinary speech to the AFl-CIO convention endorsing Barack Obama. In a now legendary and oft-repeated section, he addressed racist critics head-on:

We can’t tap dance around the fact that there are a lot of white folks out there who just can’t get past this idea that there’s something wrong with voting for a Black man. . . . Obama’s policies will help working-class voters of all races. But there is only one really, really bad reason to vote against Barack Obama. And that’s because he’s not white.

Trumka was devoted to dignity at work. On a job site, whether it was a mine or a COVID-infected meatpacking plant, he would frequently ask three questions: “Will workers be safe?,” “Will workers be treated fairly and with dignity?,” and “Who will get the wealth workers create?”

Perhaps his greatest contribution was his commitment to forging the labor movement into the key force charged with the responsibility of protecting our democracy. AFL-CIO Secretary-Treasurer Liz Shuler wrote:

Trumka in 2020 was prepared to lead working people into battle to defend our democracy — and his leadership in 2020, together with the courage of union members, helped make sure that the votes were counted, the result was honored and democracy was saved.

In what turned out to be his final address to a union crowd, Trumka declared that organized labor is fighting not just for itself but for “democracy, which has been under siege.”

“Give us back our power, and we’ll pull our country back from the brink,” he declared.

In the same speech, as he did so many times over the years, Trumka identified for us who the enemies of democracy are in this country:

It’s no coincidence the opponents of democracy are also anti-worker politicians—politicians who have spent decades dividing and weakening working people, tearing us apart by race, weakening social protection programs, and fighting our unions with everything they have.

Our message to them is very, very simple: Your time is up.

A key part of his fight for democracy was rejecting the age-old anticommunism that infected the labor movement.  While not a person of the left, he  took many steps including elimination of anticommunitst clauses from union constitutions and opening up his communications department to the People’s World.

Trumka’s support for the PRO Act, which would help break the chains on labor, is his last legacy. “We need this Congress to pass the PRO Act, to rewrite years of laws that are hurting working people, not helping them,” Trumka said. The PRO (Protect the Right to Organize) Act, labor’s number one legislative priority, is the most pro-worker, wide-ranging labor law reform bill since the original 1935 National Labor Relations Act.

A victory for the Pro Act, Trumka declared, would help lead to “racial and gender equity and a rebalancing of power so we get a fair share of the wealth our work creates. . . . Together we’re going to keep winning policies that work for every worker — no exclusions.”

The deceased union leader might be the first to say that a lot more needs to be done. In addition to winning union rights, strengthening voting rights and taking affirmative measures for equality are at the top of the list. And all of this depends on a recommitment to organizing. Without this, nothing else is possible.

Let’s honor Trumka’s memory by fighting hard for the passage of the PRO Act, which currently sits in the U.S. Senate. This act would expand democracy and workers’ rights, two goals Trumka worked for during his long years of union activism.