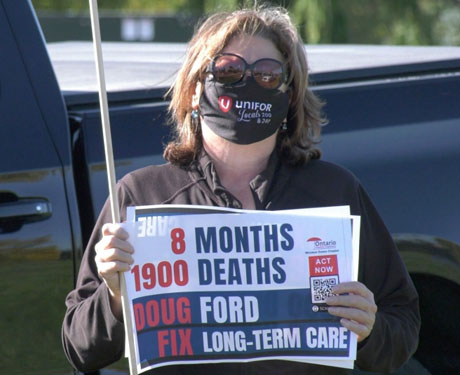 While retaining much of the framework of the 2007 Act, Bill 37 has incorporated what the Tories have ‘learned’ from the pandemic: that seniors, no longer productive, are expendable.

When assessing Bill 37, it is important to look at the cumulative effect of Tory legislation, and actions, or lack thereof. The original LTC legislation, brought in by the Tories’ Liberal predecessors, already contained language weak in protection. Now, principal among the alterations in the new legislation is a change from promoting not for profit homes, to those that are “mission driven”, thus including the for profit LTC sector. These weasel words will put into law what the Tories have already been doing: awarding planned new beds in the LTC sector to for-profit homes.

This despite resident deaths due to covid in for-profit (“mission driven”) homes, being close to double those in the not-for-profit and municipal sectors, and in some cases almost triple. That would include for-profit Sienna and Revera Homes, both who have CEOs sitting on the corporate-dominated Ontario Long-Term Care Association, which heartily supports Bill 37.

One should also consider the Ford government’s pledge to insist on air-conditioning in all LTC homes, after the terrible levels of heat recorded in residents’ rooms in the summer of 2020. While the percentage of homes that have achieved this has reached 60%, the province’s building code does not require that AC be mandatory in new home construction.

Other lowlights in the Bill include making a “target” of 4 hours care per resident by 2025, a “Residents’ Bill of Rights”, and much ballyhooed increased fines for negligence. This from a government that cut long-term care funding in 2019, when reports were already circulating about residents acquiring bed sores from lack of attention, or being humiliatingly left in bed in their own waste.

The 4 hours of care legislation, intended to be implemented immediately, was long campaigned for by CUPE, SEIU and Unifor. Supported by the rest of the labour movement, the OHC and advocacy groups, it was finally agreed to by the Tories, under the pressure of the covid pandemic. However the legislated hours of care will only reach 3 by this coming March, and 4 only by March of 2025.

Residents’ ‘rights’ will surely be hard to enforce, when one looks back at Bill 218, brought in by the Ford Tories to shield for-profit homes from legal actions, by making the level of proof, or ‘test’, nearly impossible to reach. Raising penalties on homes that, upon inspection, do not provide an adequate level of care, looks good if you don’t have any actual record of enforcement. Besides, the Tories eliminated surprise inspections well before the onset of the pandemic.

Workers in the LTCs continue to be covered by Bill 124, limiting wage and compensation increases in the public sector to 1%. All homes, whether for profit or not, are eligible for public funding, and therefore workers are covered by Bill 124, despite not working directly for an arm of government. However it is no secret that wages in the for-profit homes are lower, and there is a higher rate of part-time and casual work being offered. This has led to many in the field being forced to look for hours at more than one home. (Workers in multiple homes were limited in doing so by emergency legislation since early in the pandemic due to the risk of spreading covid from one facility to another – however, even with temporary pandemic pay to make up the difference, the problem of low wages and insufficient hours is far from being resolved).

Bill 37, and partner legislation (such as Bill 218), changes in building codes, lax if any enforcement, should be seen, and has been, as an attack on public standards, and indeed on public healthcare. This is the ‘freedom’ sought by the corporations and their political friends: freedom to turn us into cash cows as we age, when our labour is no longer profitable. (NB: except when they require us due to staff shortages. After that, ‘as you were’).

There has been a fightback, led by the OHC, unions, and the families of those in LTCs. The Days of Action called by the OHC last October were well attended throughout the province, as have been the motorized processions organized by SEIU and others. In response to this fight, the federal NDP laudably called for the inclusion of LTC care in to the Canada Health Act. This would, in effect, if enforced, bring for-profit LTC Homes into the public sphere through nationalization. When asked about this in a news conference on long-term care, Jagmeet Singh sidestepped the term “nationalization”.

On the face of it, such legislation on a federal level, if taken seriously, would have major consequences. Nationalization – removing big capital from LTC sectors across the country, would require mass mobilizations challenging all private delivery of healthcare. It would also be seen as a direct challenge to the capitalist class, and would signal an end to politics as usual. Politics like those of the NDP, who campaign for popular reforms, with no real strategy, or indeed desire, to fully implement them. The scale of such mobilization, to reverse cuts and privatization, would call into question this system itself, based on profit.

Yet this is the radical thinking that activists will have to engage in, if we are to confront the scale of the attacks we are faced with.

Protecting Seniors? Bill 37 and the Ontario Crisis in Long-Term Care