‘Fortress conservation’ is driving us from our homes 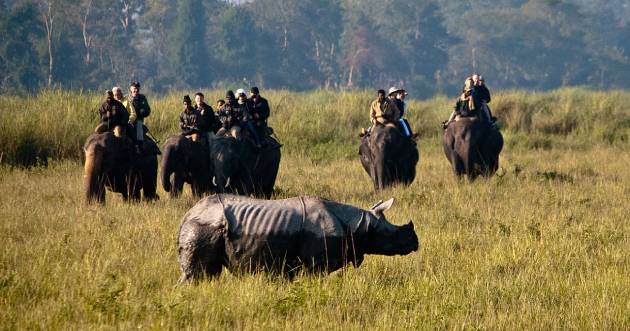 Pranab Doley, an Indigenous activist from the Mising people, condemns the militarization of the conservation industry in India and beyond, and its threat to the land’s best protectors.

I come from Kaziranga, a lush area of Assam, India which sits across four major rivers, including the Brahmaputra which flows through Tibet, India and Bangladesh. It is also home to the Kaziranga National Park. First established in 1905, the park is famous for the great Indian one-horn rhinoceros and has the largest population of the animal in the world. It’s also considered to be one of the more successful models of the animal’s conservation, as the numbers of rhinos – below 50 during British colonial times – today stand at around 2,000.

Kaziranga is also a World Heritage site recognized by UNESCO and listed as a global hotspot of biodiversity by the IUCN (International Union for the Conservation of Nature). The rich biodiversity exists because of the local and Indigenous communities who have lived here for centuries, the lifestyle we have, our belief system and the relationship we have with the forest. The conservationists see nature as separate from humans but we see nature as a whole that sustains us and everything around us. We venerate nature – the animals of the forest, the streams and the trees.

However, all that is under threat thanks to an increasingly militarized form of conservation. This is being promoted by the Indian Forest Department, in a feudal, colonial setup, assisted by large international and national NGOs. A flawed and exploitative idea has emerged: the plan to turn 30 per cent of the world’s surface into Protected Areas by 2030 (30×30). This idea, being pushed by the IUCN, has been greenwashed, whitewashed and sold to the world, alongside ‘nature-based solutions’ (NBS), as a way to solve climate change.

The conservationists see nature as separate from humans but we see nature as a whole that sustains us and everything around us. We venerate nature – the animals of the forest, the streams and the trees

In September, I took part in the ‘Our land, our nature’, an alternative congress organized by Survival International and other organizations in Marseille, France, as a counter to the IUCN conference taking place at the same time, in the same city. Before I spoke I went through the list of people who were attending the IUCN conference and there was nobody who actually represented the pain and grief of people who are going to lose out from these policies – only bankers, large bureaucrats and NGOs like WWF who are complicit in the militarization of conservation in India.

More and more, conservation projects are shifting towards ‘fortress conservation’, a stringent and militarized approach which separates people from nature. These projects are carried out from a very concentrated power base and obstruct the day-to-day life of communities residing in the forests around Kaziranga and other naturally rich areas across India and Africa. Indeed, Blaise Mudodosi Muhigwa, a lawyer and environmental jurist from the Democratic Republic of Congo who also spoke at the alternative congress described how in his country, ‘“fortress conservation” hasn’t created any positive results – it’s only resulted in multiple negative impacts and the infringement of human rights.’

Back in India, in 2010, the Assam government amended the criminal procedure code of the state and gave the wildlife authorities the power to use arms with immunity. Forest rangers were given the green light to shoot on sight and, until 2015-16, there were several violent encounters between Indigenous people and guards for which nobody was held accountable. No legal procedures were followed, no human rights questions were raised. Eventually in 2015, seven-year-old Akash Orang, a member of the Oraon tribe, was seriously injured when he was shot in broad daylight by a forest ranger. There was a huge public outcry, which was supported in equal strength by Survival International and the BBC, who released a powerful documentary which went on to be banned by the Indian government. Those of us who were part of the struggle against these abuses were attacked at every front. We were sent to jail for raising questions and false cases were filed against us.

These are the effects of the militarization of conservation, whether in Kaziranga, Nepal, Myanmar, or parts of Africa. Birendra Mahato, researcher from the Tharu tribe in Nepal, has recounted how this militarization has ‘brought conflict between park and people’ in Chitwan National Park. In 2020, Raj Kumar Chepang a 24-year-old from the Chepang tribe was beaten to death by soldiers for collecting snails in the park.

‘Fortress conservation’ takes away the human rights of the communities residing around national parks. In Kaziranga, there are curfews that prevent us from leaving our houses after 6.00pm, as well as regulations which forbid us from collecting staple foods that we’ve relied on and nurtured for hundreds of years. We’ve been completely driven away from our lands and our rights removed. We can’t graze our livestock in the National Park. This is destroying the livelihoods of local and Indigenous communities. As a result of these punitive measures, hundreds of young people have migrated away from Kaziranga for fear of becoming falsely incarcerated and because they are unable to sustain themselves economically. At the alternative congress, Kipchumba Rotich from the Sengwer tribe of Kenya also spoke of how people from their community died of hunger and children were unable to go to school after they were evicted from the Embobut forest. Their villages were razed to the ground by the Kenya Forest Service in the name of ‘conservation’.

What do the authorities intend to ‘guarantee’ by approaching conservation in this way? They’re guaranteeing a pristine space for tourism to flourish. At the same time they are amending laws and regulations to enable extractive industries such as oil and gas exploration and mining for coal and stone in Kaziranga and other National Parks.

It’s the people of Kaziranga (not the authorities or NGOs) who have sacrificed their lives and resources to conserve this environment, and care for the local flora and fauna.

The Indian government claims that if they can relocate communities away from the forest, wildlife and nature will prosper, but what I see is that they are using conservation to ease the process of exploitative capitalism and avoid making ordinary people stakeholders in the actual conservation of nature.

The forest and wildlife survive because of the symbiotic relationship most local and Indigenous communities share with other species. When we plant crops we do so knowing that we will share what grows with the wildlife, local communities sacrifice their livestock to feed them. In Kaziranga, lands are also being taken away by the rich and powerful to enable their luxurious lifestyles and business ventures, including the aggressive planting of palm oil, while the locals are being thrown out in the name of conservation. So much for the love of nature!

Hundreds of human rights violations have taken place in Kaziranga, but organizations working in the area, including WWF, IUCN and Aaranyak have not spoken out against them. They continue to hide as an opaque entity which facilitates these abuses. This is why we condemn the conservation industry; it doesn’t portray the emotions, needs and political will of local and Indigenous communities – people who are actually the stewards of the natural world and who must be the central voice devising any policies.

It’s crucial to convey the strong resistance to the flawed ideas that continue to be put forward by a fraternity that’s trying to recolonize territories belonging to Indigenous peoples, marginalized communities and the poorer countries of the Global South. Our fight is against the capitalist, intensive approach of those in power who want to commodify everything – not only nature, but the humans existing within it.

What is driving the employers to attack working people today? – The Militant