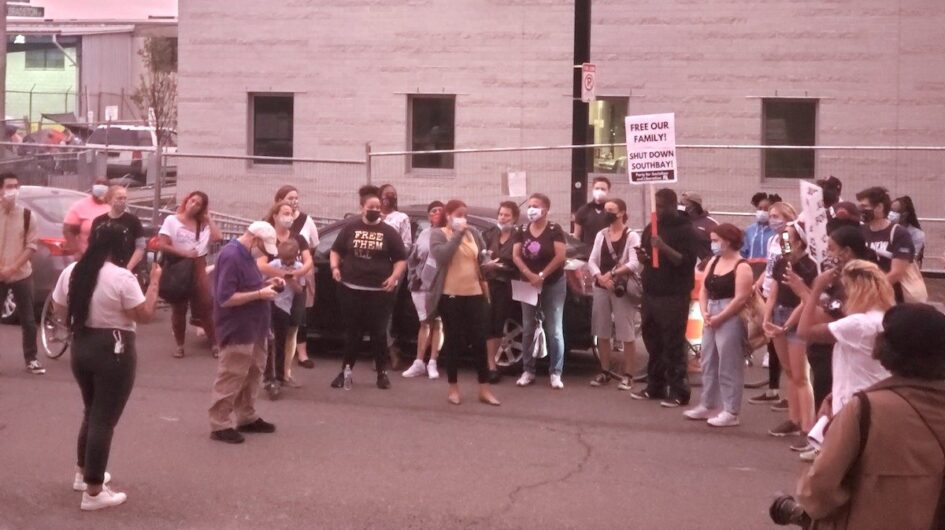 The jail reported that Robouin was found unresponsive in his cell and emergency medical services were not able to revive him. He was only taken into custody the day before. This latest death was met with protests outside of the jail on September 24 and October 1.

Sheriff Steve Tompkins released a few brief statements and said that the death is “under investigation,” and that there is no connection between any of these deaths. But protesters and families are demanding an independent investigation into the deaths of Rashonn Wilson, Ayesha Johnson, Edward “Jay” Isberg and Carl “Chuck” Rabouin.

Sheriff Steve Tompkins has still not budged or revealed any details of the investigations he claims are underway.

Families demand justice for their loved ones, and all those who have died

On July 28, 35-year-old Ayesha Johnson was committed to the Suffolk County House of Correction at South Bay. She was awaiting an alcohol treatment program in New Bedford. The sheriff’s department picked her up from Dorchester Courthouse at 2 p.m. before driving her to the South Bay Jail.

Less than three hours later at 4:35 p.m. she was reportedly found unresponsive in a holding cell while waiting to be taken to New Bedford. She was pronounced dead soon after. Johnson lived in Dorchester and is remembered by two children.

According to her cousin, Elijaih Perry, this was no accident.​​ “My cousin was neglected. She needed help. The city and the state failed her.”

Forty minutes after Johnson died, another inmate at the same jail died alone in a medical unit. Edward Isberg Jr., 42, of Wilmington, Massachusetts was also “found unresponsive” at 5:15 p.m. and could not be resuscitated. He had been arrested the previous day for allegedly stealing tools from a construction site and was being held on $200 cash bail.

Shortly after Johnson and Isberg died, Suffolk County Sheriff Steven Tompkins released a statement that said “at this time the two deaths are not believed to be related in any way.”

To Perry, these deaths are part of a larger problem. “This is not just about an individual case. This is happening all across the country, in different ways and at different levels. There are so many missing Black children, women, and men … and no one knows where they are. There’s not enough coverage. And we know unless you look a certain way or fit a certain tax bracket, you’re not really cared about.”

A pattern of insufficient care

The deaths of Johnson and Isberg came a little more than two weeks after another Suffolk inmate, 31-year-old Rashonn Wilson, “fell ill and was taken to the hospital where he later passed under doctors’ care,” according to the sheriff’s department. He had been in custody since March and was being held on $15,000 cash bail when he died on July 12.

Shameka Blake (the mother of Wilson’s son), Saqwuan Simmons (Wilson’s cousin), and Keeshawna Jacobs (Wilson’s sister), also spoke with Liberation News about the death of their loved one. “We want answers. We just want to know exactly what happened. What caused it? Because I’m pretty sure it could have been prevented,” said Simmons.

“He was a family man. He was everybody’s big brother. Everybody’s big cousin,” Jacobs said. When asked what justice would be for their family, Blake responded, “Justice is answers. And treating inmates properly. Stop acting like they’re animals because they’re in here and locked in a cage. They still have their rights. They’re still human.”

Since 2017, 14 people have died in the custody of the Suffolk County Sheriff’s Department — seven at the House of Correction at South Bay, and seven at the Nashua Street Jail.

Romilda Pereira, a woman formerly incarcerated in the Suffolk County HOC and the lead organizer of both protests outside of the jail told Liberation News, “Sexual assault, physical assault, verbal abuse all happens at the hands of Suffolk County jail guards.”

Authorities say it is “not clear” how Wilson, Johnson, Isberg or Rabouin died. To this day Sheriff Steven Tompkins has not answered the families inquires into the details of their loved ones’ deaths.

The families and their supporters made their demands clear: an independent investigation into the deaths of four people held in Suffolk County Sheriff custody since July 12.

Without a fighting grassroots movement that puts pressure on the state and its officials, we can only expect more tight-lipped responses and unclear answers for the families. The Party for Socialism and Liberation is committed to building this fight for justice and supports the demand for an independent investigation into these four deaths.