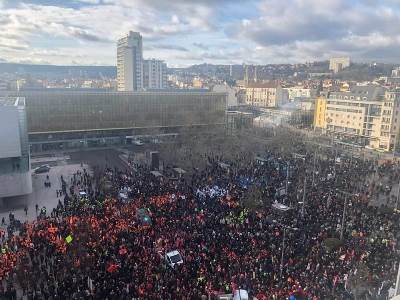 January 21, 2023 – From Socialist World
177 views
Thursday was been a huge day of mobilization in France. Close to two million people demonstrated across the whole country. In Paris, several metro lines were “striked shut”, and the unions had organized dozens and dozens of coaches to carry striking workers to the, at least, 300,000-strong demo. The streets were so packed that the demo had to be split into two boulevards. There were 140,000 in Marseille, 50,000 in Toulouse and St-Etienne, 25,000 in Orléans, 20,000 in Rennes, Brittany.
Many people liked our placard: “Macron out!”. In Nancy, Lorraine, 13,000 turned out.  It was the biggest demonstration in a very long time (bigger than the one on December 5, 2019, which had kicked off the previous successful battle against Macron on pensions).
In Rouen, Normandy, big demonstration of 18,000 people, very imposing. Slogans that revolved around “no to the reform”, but also ” back to retirement at 60″, and for “a good pension”.
There was much discussion about everyone’s personal situation and the importance of the demonstration, which gave everyone strength because no one expected such a large demonstration.
In Montélimar, Drôme (South-East), we heard, “6000 in Montélimar, compared to cities like Paris it’s very small, but it’s historic for this city!”.
Many smaller cities, like Gap (Alps) had several thousand demonstrators in a mobilization not seen for a long time.
And the vast majority of the population are supportive of the strike (two thirds, according to a poll), which indicates larger layers of workers might join the struggle if they can see that it will effectively challenge Macron and his pro-capitalist policy.
It is the same with young people, who also participated in demonstrations, but in smaller numbers. Before the strike, while leafleting and talking to young people, we found that they were very sympathetic to the mobilization but did not see yet the point in them joining the struggle. Many see the issue of pensions as a very far off subject. We have been discussing how they needed to fight along the workers for their own study conditions and a future. With demonstrations as powerful as that of yesterday, and 75% of 18-24 years old supporting the strike, no doubt that wider layers of youth will be electrified and will consider joining the next demonstrations. This could bring new waves of energy to further strengthen the struggle.
The first day of strike
Many workers, both from public and private sectors, were on strike. Rail traffic was very disrupted throughout the country. The strike was very well attended at EDF; electricity production dropped by 7000 MW… and the CGT-Énergie announced that it would cut off the electricity to the MPs who would vote the reform! One in four workers were on strike in the employment agency. One in four in the public sector, as a whole, with sectors, in particular, who were more mobilized, like education, with a 40% strike rate. In the private sector, some big companies were out: car manufacturers Renault and PSA, in the metal industry, dockers in the ports, workers in retail companies like Carrefour, Darty, glass workers, cement workers, construction workers, “sans-papiers” (undocumented) precarious workers… too many to name!
The strike had been called barely a week before, which left little time to prepare for it and organize general assemblies in the workplaces and study places. Many workers then went on strike and came to the demonstration in small groups, not organized in a workplace contingent but with their trade-union federation. We spoke to workers who told us they had gone on strike, just two, three of them in their workplace, without even having talked to a trade-union rep.
So, why was this protest so important? It is important to note, first and foremost, that all trade-union federations, are opposed to Macron’s project, and this brings a sentiment of strength and unity.
But is also because the issue of pensions, in particular, is very important, because it affects the very functioning of society: the vast majority in France massively refuse an “every man for himself” approach to health, unemployment, retirement, and public services, in general, and want to keep a pension system based on inter-generation solidarity… because we want a society based on solidarity, where everyone has a quality job and where older workers can enjoy life without working, from 55 years old for jobs that demand drudgery, and 60 years old maximum, for all. It is because this is such a fundamental question that the mobilization was so massive, but not only. The new pension reform, once again, was the very big straw that broke the camel’s back.
It came in the context of many strikes taking place in various sectors for pay increases. As we underlined in our leaflet: “They are being successful, such as at the SNCF or GRDF (gas company), which have obtained 200 euros, for all. There have also been successes at many small companies in the private sector which have demanded wages to at least match the level of inflation.”
Yesterday’s mass mobilization was very clearly a reflection of the degree of anger and frustration that exists in the working class and the general population. This is why, along with demands on the pension, we had demands on wages, means for the public sector (the striking firefighters’ contingent received applause from other demonstrators in Paris), better jobs…
As we have been putting forward, what is needed is to build a determined, mass struggle against Macron and the capitalists.
La France insoumise, Mélenchon’s movement, and other organizations (some trade-unions but not the main confederations, joined the call) are calling for a national demonstration in Paris on the 21st against the pension reform. We will, of course, participate in it and discuss these demands and tactics to build the mass strike which is needed to defeat Macron. 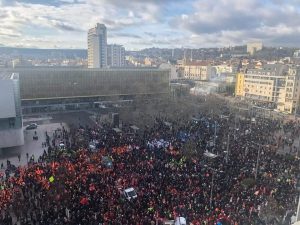 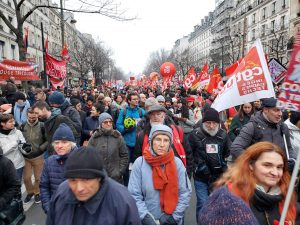 France: Mélenchon, Macron, Zemmour and the future of the left