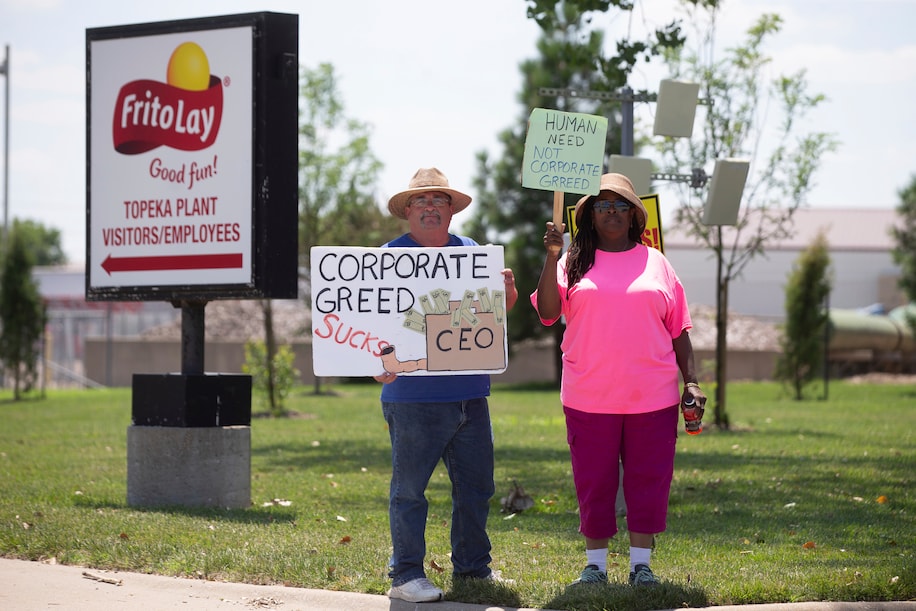 On July 5, hundreds of Frito-Lay factory workers at the company’s plant in Topeka, Kansas began a strike that ultimately lasted 19 days. Workers at this facility are unionized through the Bakery, Confectionery, Tobacco Workers and Grain Millers’ International Union (BCTGM) Local 218. At the heart of this struggle is the callous and inhumane treatment of employees by the Frito-Lay Corporation (owned by PepsiCo, a multibillion-dollar monopoly), in the context of significantly increased pandemic production. Workers are being treated as expendable by the company that claims to consider them “essential.”

The strike began on July 5, after BCTGM and Frito-Lay failed to negotiate their regular two-year contract. Although union leadership initially recommended the contract, the majority of rank-and-file workers rejected what they viewed as insufficient wage increases. Additionally, the contract did not abolish the mandatory overtime policy or guarantee workers any days off. Frito-Lay responded to news of the strike by calling the worker’s claims “grossly exaggerated.”

Forced overtime was the main issue that workers and union leadership cited as the impetus for the strike. Workers are coerced into “suicide shifts,” where they work 12 or more hours in back-to-back shifts with only eight hours or less of time off in between. Many workers reported that this policy led to their working at least 12 hours a day, seven days a week, for numerous weeks on end. This resulted in many workers getting no days off for months at a time and the deterioration of their mental and physical health. Multiple sources on the picket line described how these brutal and inhumane schedules had affected their lives. Workers could not spend time with their families, or even get sufficient rest between shifts that have physically damaged their bodies. Moreover, workers described how the mandatory overtime policy has led to severe health problems, deaths, and multiple suicides among their coworkers over the years.

Plant safety is also a major concern. One worker at the picket described multiple ways in which the plant is unsafe—including the total lack of air conditioning in areas where temperatures reach well above 100 degrees—as well as a lack of concern for fire safety. According to worker Cherie Renfro, management forced workers to “work in dense smoke and fumes during and after a fire,” with management responding “it’s just smoke.” One worker died while on the assembly line. In response, management forced other workers to move the body to make room for another worker to replace the one who had died and resume production.

Workers identified low and stagnating wages as another important demand of the strike. This is an especially crucial demand considering inflation caused by the pandemic. Cherie Renfro noted that Frito-Lay has not given adequate cost of living raises for decades. Mark McCarter, a union steward at the plant, noted that he had not gotten any raise whatsoever in ten years. This signifies a complete lack of respect for workers by management. All of this is especially egregious in the context of PepsiCo’s recent announcement of their plan to enact “good, strong price increases” on all of their wholesale goods.

The mood on the picket line was one of outrage toward corporations, CEOs, and billionaires profiting wildly off of workers during a time of pandemic and economic crisis. Multiple workers articulated the disrespectful and inhumane way that the bosses have interacted with them. Community support has also played a huge role in this struggle, with large donations of food and water to the workers. The sheer number of people who honked as they passed the plant’s intersection in their cars shows a clear shift in popular support for the U.S. labor movement in a state whose government is extremely hostile to organized labor. Support from other unions was also a feature of this struggle, with members of the International Brotherhood of Teamsters and multiple teachers’ unions picketing and raising money for the BCTGM workers in a crucial show of solidarity.

Growing Fightback by US Labor

The strike ended on July 23 when a majority of union members voted “yes” to a revised contract that guaranteed all workers at least one day off per week. However, the vote was purportedly close, according to one union official. Two days prior to the end of the strike, multiple workers on the picket line were not satisfied with the revised contract being offered and were planning to vote “no.” The new contract does not put an end to forced overtime, and the proposed wage increases are still insufficient. Multiple workers expressed a need to continue fighting to get what they need.

This particular struggle is occurring in the context of the shameful treatment of workers by U.S.corporations during the pandemic. It also comes in the context of a growing fightback by workers. There have been several other large strikes during the summer, some of which are still ongoing, including the St. Vincent’s strike in Massachusetts and the coal miners at Warrior Met in Alabama. The Frito-Lay strike caused a shortage of products throughout the entire Kansas City region. This shows the power of an organized workplace, where workers can win by hitting the boss where it hurts: their profits. While the gains made by this strike were very limited, the workers’ willingness to fight in their own interests was no doubt part of the inspiration for the ongoing strike of Oreo and Chips Ahoy workers at Nabisco plants. Major unions should throw their weight behind supporting these strikes, as a victory in any workplace can have a tremendous ripple effect, giving confidence to workers across the country to fight back.