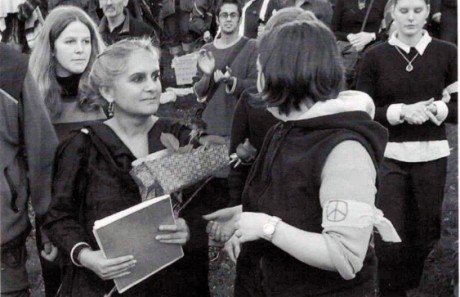 On October 1, 2001, Sunera Thobani –  former chair of the National Action Committee on the Status of Women and a professor at the University of British Columbia – gave an anti-war speech at a conference in Ottawa. This was in the immediate aftermath of the September 11 attacks, as the drums of war against Afghanistan were beating louder and louder. Thobani was attacked and vilified in the media, and subject to racist and sexist attacks for speaking out against the drive to war. On October 20, 2001 over one thousand people showed up to the Ironworkers Hall in Vancouver to hear Sunera Thobani speak. She was greeted with a standing ovation. On this twentieth anniversary of September 11, we reprint portions of her call to action which helped galvanize anti-war sentiment across the country.

What I said October 1 was not new, was not very radical. People have been saying this for a long, long time, with louder voices and with greater courage than I have.

There is a very proud tradition in this country and in all other countries of anti-war movements, of people standing up for social justice, and refusing to be made complicit in mass terror and bombings of people in other parts of the world, and in this country the violence that has been perpetrated against Aboriginal peoples.

Even before people in the United States had the time or the opportunity to fully comprehend, and to realize the enormity of the attack on September 11, the administration had already begun to feed the war frenzy, by putting military aggression at the forefront as the only possible response.

People in the United States were consumed with the question, “Why? Why did the perpetrators hate us so much?”

So the danger is very, very real this war might spread to other regions, other parts of the world, and this is a terrifying prospect for all of us.

The US administration has reserved its right to unilaterally define, and according to its own interests only, which nations are murderers and outlaws themselves.

This is the vigilante justice of the frontier, that is the approach which is being used.

Many people in the United States oppose this administration’s response.

Amongst the people who were killed on September 11, there is a couple whose son died in the World Trade Centre.

Their loss was tragic, but they are peace activists, and they have taken a very courageous stand in opposing any military retaliation by the United States administration.

There have been peace vigils, marches, rallies in most of the major cities in the United States.

Berkeley, yesterday, has become the first city in the United States to pass a resolution opposing the bombing of Afghanistan.

Rigoberta Menchu had a delegation of nobel peace laureates to read to the United Nations general assembly, arguing that the attacks of September 11 should be treated as a crime against humanity, and that there should be no military aggression, and no bombing of Afghanistan or any other country.

So many, many people across the world are taking this position.

But what is the administration doing? It is attacking Taliban military sites. But also it is attacking civilian targets. These are being hit across the country. We saw images of the Red Cross warehouse being bombed and going up in flames.

We’ve seen images of villages being destroyed. Residential areas of Kabul have been hit.

The United Nations’ World Food program spokeswoman says that they are now seeing today pre-famine conditions in the central highlands in Afghanistan, the people are eating cattle feed, insects and poisonous grasses, because they cannot find food. She says they are only reaching two million people, and they need to feed at least six million people every day.

And the winter is going to set into Afghanistan.

The US here is using a similar strategy that it did in Vietnam – destroy villages and their populations to “liberate” them from communists. That is what they did in Vietnam.

What we are seeing are the beginnings here, is the bombing of villages, killing civilians, displacing millions from their homes and their communities, in order to “liberate” them from the Taliban.

We have to build solidarity with the movements that are resisting this bombing, in other parts of the world, and also the Afghan peoples’ organizations that are fighting back and resisting. And we need to recognize that the Afghan women’s movement has, for a long time now, been in the forefront of the fight against the Taliban, and also against its Islamist predecessors.

These are the brave and courageous women who tried to alert the world to what these Islamist factions were doing to women’s rights in Afghanistan.

We have to build solidarity and to listen to these voices, who are telling us now that they do not support the idea of creating a new government which would be led by the Northern Alliance.

They have pointed to the horrific record of the Northern Alliance when it was in power. The human rights abuses, the rapes of women that were carried out, the violence that was used, is something that these women’s groups have been very very concerned about, and are now telling us that to bring in a government that will be led by the Northern Alliance, will not be a good thing from their perspective.

In Canada also, we are experiencing the effect of this war frenzy. Racial profiling is being legitimized in every sector of our society. Tightening of immigration and refugee laws are the order of the day. I.D. cards being introduced for landed immigrants.

The erosion of rights that is being carried out at this time in Canada, are all being justified and being fuelled by this war frenzy, and what this is doing is creating a climate in which racism and sexism can flourish.

People can say anti-immigrant, anti-refugee things. If you read the newspaper any day, then you will read Afghan people being described as being like mountain goats, that they can run up and down those valleys in Afghanistan.

You hear them being talked about as rats who have to be smoked and flushed out of the ground.

The Bush administration says it wants to rid the Middle East swamp of mosquitoes. This is how Muslims are being talked about.

This war frenzy and the targeting of immigrants and refugees and of Islam and Muslims, has legitimized the worst forms of racism to be expressed.

Muslims are now being described as being like rabbits, like snakes. The most amazing kind of racist language is starting to become legitimized and accepted.

The attacks on me have been pretty vicious.

But I want to stress, this is not an attack on an individual person. This is an attack on the politics I represent, and also the anti-racist, feminist movement in this country.

This war is indefensible. There is a real danger of it spreading to other regions, to other parts of the world. This is a real possibility, I cannot stress this enough. We have to oppose it.

Opposing this war has to be the biggest priority for all of our movements. I hope that this is a time that will bring us all together with this one goal right now, which I think is the most urgent project we are facing in this country and on this planet.

And I want to stress that the anti-war movements are growing in every country. My sister called me last week, and 25,000 people were on the streets of London last weekend.

Opposition to this war is continuing, and it will continue to grow day by day. And we have to commit ourselves to be part of this movement, part of this international movement to stop this kind of war and miitary aggression.