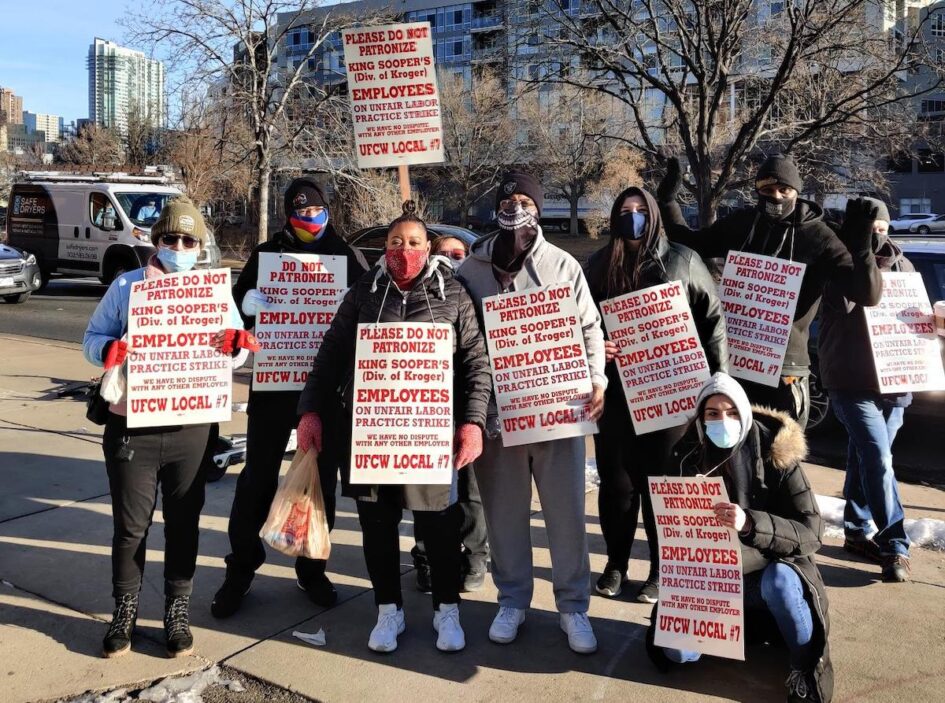 On Jan. 12, United Food and Commercial Workers Local 7 grocery store workers from across the Denver metro area went on strike to demand better pay and working conditions in King Soopers stores. King Soopers is owned by Kroger, a company that saw $2.6 billion in profits in 2020. This is one of the largest strikes in recent Colorado history, with approximately 8,400 workers on picket lines.

King Soopers workers, who are members of UFCW Local 7, voted on Jan. 3 to go on an Unfair Labor Practices strike in stores across Colorado for three weeks starting on Jan. 12. Their contract expired just days ago, on Jan. 8.

Kroger is the largest supermarket chain by revenue in the U.S. and represents the worst of the U.S. capitalist class. Its CEO, Rodney McMullen, received a $6.4 million raise in 2020, while workers in Kroger stores struggled during the pandemic. Elaine Chao, an ultra-conservative who served in the Regan, Bush and Trump administrations, was elected to Kroger’s Board of Directors in August 2021.

Liberation News was on the picket lines talking to workers about working during the pandemic, conditions in stores, and how grocery workers should be treated. Some workers were only comfortable giving their first names.

Tina Meyers has worked for King Soopers for 32 years. Meyers shared, “I think it is unfair that they are hiring people at $18 an hour when I only make $19 an hour after 32 years. I feel like I deserve a raise.

“They gave us two dollars hazard pay when the pandemic started. But then they took it away. Now that the pandemic is bad again, and everyone needs to wear masks and take precautions, they aren’t paying us any extra. We are putting our lives on the line. We need the extra money.

“We need better pay in Colorado. Everything is getting more expensive, we can’t afford our housing. We can’t afford our groceries, for that matter. People are going hungry. I have coworkers that are living in their vehicles. It isn’t fair. You can’t live in your car and go to work at the same time.”

Liberation News also spoke to Paulina Black and her child outside a King Soopers in northeast Denver. Her husband works the night shift at King Soopers, so she and her son joined him on the picket line.

“We already don’t have any money. The benefits that they give us, we can’t go to the doctor. We have to choose between medicine and food, medicine and bills. Do not support King Soopers while we are on strike. If you stay out of the store, they have to give us what we want.”

Alyssa is a worker at a downtown Denver King Soopers, near Coors Field. She talked about how difficult the pandemic has been for grocery store workers.

Brenda Cisneros-Sanchez is a worker in the King Soopers pharmacy in northeast Denver. She told Liberation News that Kroger enforces COVID restrictions on workers, but not customers, which leaves her and her coworkers at risk.

Cisneros-Sanchez says that King Soopers is not cautious enough about COVID.

“So many people have died, and that is putting a lot of pressure on the people that are still here. For a long time, I didn’t realize why we were so short-staffed. And now I recognize, it is because so many people have COVID or have died.”

King Soopers workers’ union, UFCW local 7, has been in negotiations with the company for weeks. Despite the union’s good faith bargaining, no local store managers or district managers have attended negotiations, according to UFCW local 7. Instead, Kroger brought in lawyers and representatives from California, Portland, and Cincinnati.

For Troy, a worker at a King Soopers in downtown Denver, this is a sticking point.

“Kroger made three billion in profits last year? It’s crazy. They make all this money, and now they’re spending money to bring people in from out of state just so they don’t have to pay us. They put them up in hotels, they’re paying for their rental cars, while we are out here picketing just so we can afford a place to live… I just want a fair contract.

“The [Kroger] CEO had a 22 million dollar bonus, and that was probably just their most recent one. We’ve been working on these front lines from the beginning of this thing. And now the company is saying WE’RE greedy! I’m sorry, I didn’t get a 20 million dollar bonus! We are the ones bringing the money into this company. The CEO doesn’t bring any money into this company.”

Rebecca works at a downtown King Soopers location and talked about attempts by Kroger to fight workers’ efforts for better pay and conditions.

“[To try and stop the strike], they have been trying to get us to leave our union. They have been posting flyers and harassing us. They want us to give up all of our rights. They are trying to tell us that their ‘last, best, final offer’ is as good as it’s going to get. But it had concessions that would let them raise and lower our wages at will. So no matter how high the offer was, they could just take it away at any moment.”

Jalyn has worked for King Soopers since 2018.

“Kroger’s expectation is that everyone works a million hours of overtime. I have not had a day off since Christmas. When someone gets sick, or has to quarantine, we have to do their work on top of ours, but it’s for the same pay. It feels like if they can find any reason not to pay us, they won’t.

“If just one of us spoke out, not much would happen. But right now we recognize that we have leverage. We can say, we want better. Give it two, three, four days, and they will recognize that they can’t do anything without us.”

King Soopers workers are asking supporters to not shop at King Soopers while the strike is on, spread the word about the strike, support workers on the picket lines and donate to their hardship fund.

Photo: Workers on the picket line outside a King Soopers location in Denver. Credit: Liberation News