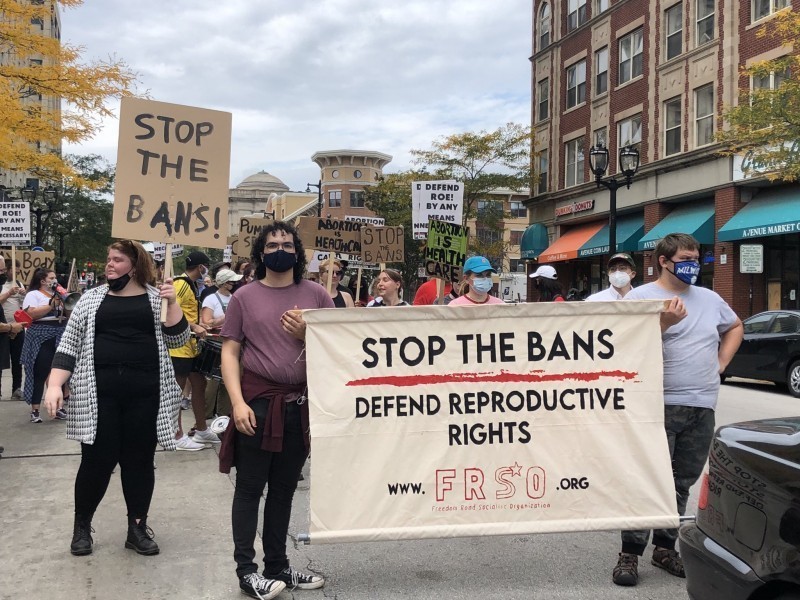 Marching for reproductive rights in Milwaukee.
(Fight Back! News/staff)

Milwaukee, WI – On the afternoon of October 2, Freedom Road Socialist Organization – Wisconsin held a demonstration to protest Texas’ abortion ban. This was held in collaboration with the Milwaukee Alliance Against Racial and Political Repression and Students for a Democratic Society, and with coordination from a couple of individual organizers. The demonstration consisted of a march through downtown from Planned Parenthood to the Milwaukee office of Senator Ron Johnson, a noted reactionary and proponent of the same ideas encompassed by the Texas law. Once outside Senator Johnson’s office, organizers transitioned into a rally with guest speakers.

The purpose of this event was to oppose attacks on reproductive rights and put pressure on Johnson to let him know that we are watching him and will not stand idly by if his friends in Madison attempt to pass a Texas-like bill in Wisconsin.

Allison Smith, a speaker representing Students for a Democratic Society, said, “As I stand here, I worry about my own ability to make choices for myself about my own body, and I fear for those who may lose access to necessary, lifesaving healthcare as a result of this bill. As many of us already know, six weeks is an absurdly short window to determine whether or not to terminate a pregnancy. In fact, many people who become pregnant aren’t even aware of it until after such a time frame has passed.”

Smith continued, “As we move forward, we must demand that our representatives take action against laws as regressive and cruel as this. We must throw our full support behind organizations such as Planned Parenthood that fight to protect lives and rights. Furthermore, we have a responsibility to support medical providers and healthcare workers in their fight to protect the bodily autonomy of their patients. With today’s demonstration, we have shown our solidarity with those in Texas most affected by this bill, as well as with marginalized communities in the United States and the rest of the world.”