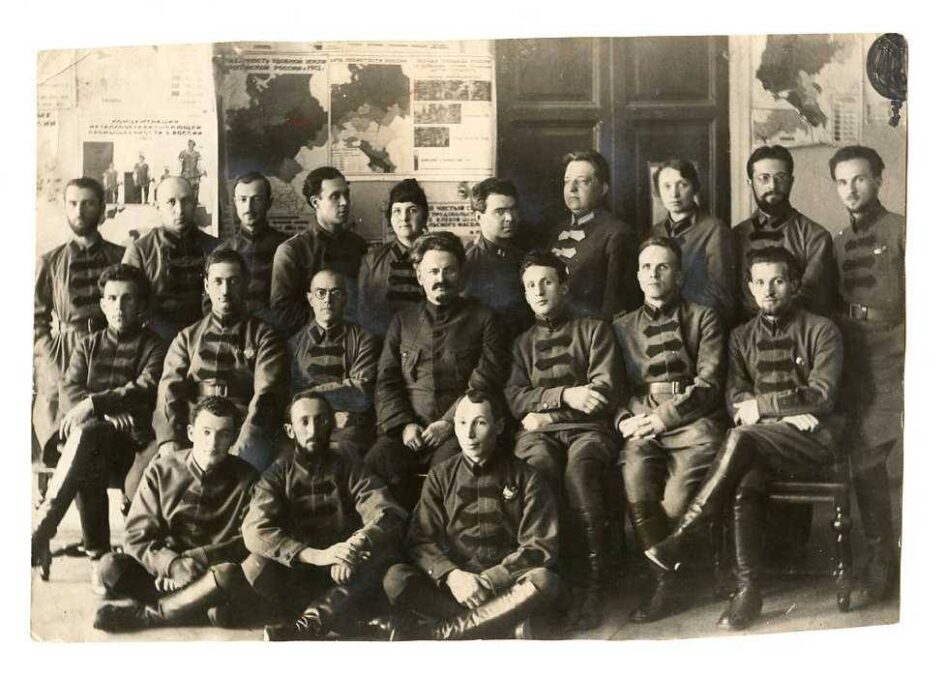 Leon Trotsky and some graduates of the Military Academy of the Red Army, 1922.

From “Trotsky and the Red Army” by Eric Wollenberg:

Since we have already quoted Radek’s 1935 opinion of the part played by Trotsky in the evolution of the Red Army, it would not be amiss to make further quotations from the article entitled Leo Trotsky, Organizer of Victory, which he wrote in 1923:

“Our State machinery is creaking and rumbling. But our real great success is the Red Army. Its creator and will-centre is Comrade L. D. Trotsky. The history of the Proletarian Revolution has proved that pens( ‘Pen’ was Trotsky’s pseudonym before the Revolution) can be turned into swords. Trotsky is one of the best of writers on international socialism, but his literary gifts have not prevented him from becoming the first leader and the first organizer of the proletariat’s first army.

“Trotsky’s organizational genius was expressed in the courageous attitude he adopted to the idea of employing military specialists to build up the army. Only Trotsky’s fiery faith in our social power, his faith in our ability to realize the best means of deriving profit from the knowledge of these military experts while refusing to allow them to Dictate to us in political matters, his faith in the power of the vigilance of progressive workers to triumph over the counter-revolutionary intrigues of former Tsarist officers could break down the suspicions of our military workers and teach them to use the abilities of these officers. We could only find a successful practical solution of this problem by discovering an army chief with a will of iron who would not merely enjoy the Party’s complete confidence but could also use his iron will to dominate the foremen whom he compelled to serve our cause. Not only did Comrade Trotsky find a way to subjugate these former officers of the old army to his will by virtue of the energy he displayed; he went still further, for he contrived to win the confidence of the best elements among the experts and convert them from enemies of Soviet Russia into convinced adherents of our cause.

“In this case the Russian Revolution has worked through the brain, heart and nerve system of its great representative. When we ventured upon the ordeal of battle for the first time, the Party and L. D. Trotsky showed us how to apply the principles of a political campaign to the conflict of arms in which we had to use arguments of steel. We concentrated all our material forces on war. Our whole party understands the necessity of doing so, but this necessity found its greatest expression in the steel determination of Trotsky.

“After our victory over Denikin in March 1920, Trotsky said to the Party Congress: ‘We plundered all Russia in order to conquer the Whites!’ In these few words he expressed the whole vast concentration of will which we needed for victory. We needed a man who could incarnate our call to battle, who could become a tocsin which summoned us to arms and to obedience to that will which demanded first and foremost unconditional subordination to the great and terrible necessity of war. Only a man who worked as Trotsky did, only a man who knew how to speak to soldiers as Trotsky spoke to them, only such a man could become the standard-bearer of armed workers.

“He was everything in one single person. He weighed the strategical advice of his experts in his brain and found the way to apply it to the greatest advantage under the social conditions as he saw them. He knew how to combine the impulses emanating from fourteen fronts and ten thousand Communists which told him at the centre what he might expect from the army, how best to work with it and what form to give it; he knew how to weld all these things into a strategical plan and an organizational scheme. And with all this magnificent work that he accomplished, he understood, as no one else did, the way to apply his knowledge of the significance of moral factors in war.

“Our army was a peasant army. In it the dictatorship of the proletariat, i.e., the command of this army by workers and representatives of the working classes, was brought about in the persons of Trotsky and the comrades who co-operated with him. It was accomplished, above all, by the way in which Trotsky drew upon the help of our whole Party machinery to inspire this war-weary army of peasants with the profound conviction that they were fighting for their own interests.

“Trotsky worked with our whole Party at the task of creating a Red Army. He could not have carried out this task without the Party’s co-operation. But the creation of the Red Army and its victories would have demanded far greater sacrifices if he had not been there. If our Party is to be the first Party of the Proletariat which has succeeded in building up a great army; this glorious page in the history of the Russian Revolution must be coupled for ever with the name of Leo Davidovitch Trotsky, the man whose work and deeds will be matters not only of love, but also of study for the future generations of workers who set about the conquest of the whole world.”

This was the judgement passed by Karl Radek on Trotsky’s role as creator, organizer and leader of the Red Army in February 1923, when Lenin still lived and he was under Lenin’s control.

In his reminiscences of Lenin (Vladimir Lenin), Maxim Gorky has related a conversation he had with him. When in the course of it he mentioned the hostility shown by certain Bolshevists to Trotsky, Lenin banged his fist upon the table and said:

“Show me another man who could have practically created a model army in a year and won the respect of the military specialists as well. We have got such a man! We have got everything!”