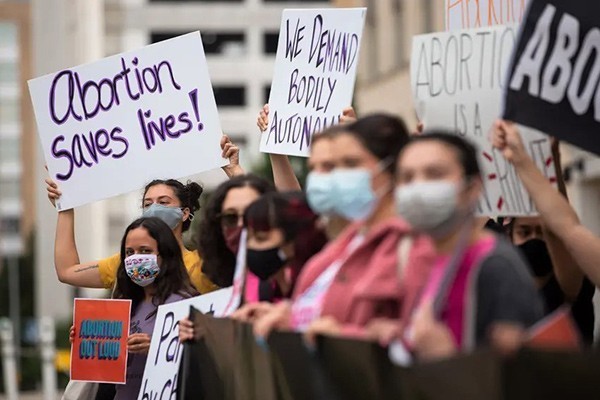 Bigots have pushed through a brutal attack on women’s access to abortion in Texas, United States.

Legal threats mean providers will not offer women abortions in the state after six weeks of pregnancy. Anyone who does make such abortions available can be sued.

This includes terminations in cases of rape or incest.

Republican Texas governor Greg Abbott signed the anti-abortion Senate Bill 8 into law in May after it passed through the Republican-dominated legislature. It bans abortion from as early as six weeks—often before many women even know they’re pregnant.

Pro-abortion rights groups such as Planned Parenthood and the American Civil Liberties Union (ACLU) have tried to stop the legislation.

Anyone has the right to sue doctors, staff members at clinics, advisers, people who help pay for the procedure or even an Uber driver taking a patient to an abortion clinic.

Texas is the first state to ban abortion this early on in pregnancy. Six weeks is the time when, according to anti-abortion campaigners, a “foetal heartbeat” can be detected.

But medical experts say this is misleading.

The American College of Obstetricians and Gynaecologists said that what is detected is “a portion of the foetal tissue that will become the heart as the embryo develops”.

“Access to almost all abortion has just been cut off for millions of people,” it added.

ACLU says some 90 percent of abortions in Texas take place after six weeks. It has described the legislation as “blatantly unconstitutional”, going against the federal Supreme Court case Roe v Wade.

This case protects the right to access abortion up to 22 to 24 weeks.

Planned Parenthood has also condemned the ban and tweeted, “No matter what, we aren’t backing down and we are still fighting. Everyone deserves access to abortion.”

The addition in the law to sue anyone who “aids and abets” an illegal abortion is new to anti-abortion law in the US.

The ACLU believes the law will give rise to “a bounty hunting scheme” and costly “vigilante lawsuits” to harass and prevent women wanting an abortion.

Women in Texas now in need of an abortion after six weeks must travel to a different state. The pro-choice Guttmacher Institute estimate this to be an average of 248 miles one-way.

Last year when Texas barred most abortion procedures during the pandemic, the number of patients forced to travel out of state skyrocketed by 400 percent.

And it already has some of the highest number of cities in the US without access to care, meaning women have to travel at least 100 miles to reach a clinic.

Three other US states—Idaho, Oklahoma and South Carolina—have all passed six-week ban bills this year. All are being legally challenged and haven’t yet gone into effect.

In its next term in October, the US Supreme Court will have to decide whether Roe v Wade should be overruled in a case concerning the state of Mississippi. The state passed a law banning abortions after 15 weeks.

Attacks on abortions at the end of last year in Poland saw hundreds of thousands of women, and men, take to the streets in protest.

The same type of resistance is now needed in Texas and across the US to push back laws that prevent women from having control over their own bodies.

In Britain on Saturday anti-abortionists are marching in London. Pro-choice activists will mobilise against them.