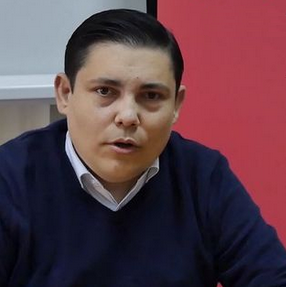 On 20 July 2001, 23-year-old protester Carlo Giuliani was shot dead by a policeman in the course of the demonstrations against the G8 Summit in Genoa. This summit went down in history for the enormous scale of police brutality. Greek MP Yiannis Bournous, who took part in the protests, reflects on their impact on left parties all across Europe.

The G8 (and G20) protest movement – the Alter-Globalisation Movement – now can look back on a 20-year history. It made possible new forms of organising: Inspired by the World Social Forums in Latin America, the European Social Forums (ESF) have been cultivated as spaces for alternative thinking and practices, and new anti-capitalist movements emerged throughout Europe. These movements ultimately led to new forms of cooperation between left parties in Europe and to the formation of the Party of the European Left.
Yiannis Bournous (*1979) is a Member of the Hellenic Parliament (Constituency of Lesvos) and currently the Shadow Alternate Minister of Foreign Affairs, responsible for European Affairs, in the Parliamentary Group of SYRIZA-Progressive Alliance. On 16 July 2001, he arrived in Genoa as a member of the Youth of Synaspismos (the predecessor party of SYRIZA) and the Greek Committee for the International Demonstration in Genoa, which mobilised 1,800 Greek activists to Genoa. On 19 July, Bournous, together with the Young Communists (Giovani Comunisti/e, the youth organisation of the Italian Rifondazione Comunista) and other forces, participated in the civil disobedience bloc of protesters in Via Tolemaide.
The following speech was held on 12 July 2021 at the conference Genoa and Beyond. The Development of the Alter-Globalisation Movement and the European Social Forum organised by transform! Italy.

People active in politics like to think historically. It is obvious that we should try and understand Genoa and place it in the broader context of left and progressive history.

Genoa was the culmination of a movement that defined our generation, defined European Left and the Greek left. It is our political legacy. In the broader sense, Genoa and the Anti-/Alter-Globalization Movement was a reaction to a severe defeat. Only ten years after the fall of real existing socialism, neoliberal capitalism was triumphant. Mainstream and traditional left was already subdued to neoliberalism or marginalized. We seemed irrelevant.

This was the context: European left was more of an empty shell.

The first sign of resistance came from Latin America. Having suffered the most brutal domination of neoliberalism and imperialism, accepting defeat was never an option. They came out with new forms of mobilising the poor, of creating broad popular fronts, that united a multitude of resistances and sensitivities in a common project.

I think it is them that taught us that in face of such an enemy and when you realise the weakness of traditional forms of left organising, you need to march together with anyone that shares your fears and your ambition to transform fear into hope. Be it militants in parties and movements, trade-unionists, NGOs, local activists, Christians, community networks. It is the purpose not the form that matters. It is also a guerilla war that we are fighting against neoliberal domination to undermine its unity and its seats of power. That created new innovative structures of coordination in the form of Social Forums.

In the early 90s, as I said, the Left seemed a relic, a piece for the museum of politics. In just a few years, there was a wave of left governments in South America, dismantling parts of established neoliberalism, building welfare states instead, nationalizing, increasing social spending, reducing inequalities, inventing ways to bypass the conservative media domination.

The Alter-Globalization Movement and the Social Forums were the link that brought together diverse experiences, different forms of protesting, organising, mobilising, and communicating. It brought the Left into the 21st century. In my country, it literally created SYRIZA.

Ten years after Genoa, at the heart of the Eurozone crisis, the number one enemy of the EU establishment, their greatest fear and challenge was the European anti-austerity movements and parties.

The Alter-Globalization Movement and the Social Forums stand in the heart of this. It is the link that brought together diverse experiences, different forms of protesting, organising, mobilising, and communicating. It was the vehicle that transformed the way we resist, fight and set the boundaries of new left projects, better adapted to the real world we live in. It brought the Left into the 21st century. In my country, it literally created SYRIZA.

I am saying this thinking that SYRIZA has been for almost ten years now either in government or a main opposition party gaining on average above 30% of votes in elections. Political conjuncture and the particular events that took place in Greece are crucial of course, but we cannot understand Greek anti-austerity revolt and the complete overthrow of the Greek party establishment by SYRIZA without taking into account the Genoa and the Alter-Global experience.

It has already been observed that today’s SYRIZA leadership under Alexis Tsipras was part of the Alter-Global Movement, was inspired by the first World Social Forum in Porto Alegre (Brazil) and Latin American anti-neoliberal movements, organized or actively participated at the European Social Forums.

It was a transformative experience that was quickly transferred in the internal workings of the Greek Left that was in search of a new identity and ways to exploit, even before the Eurozone Crisis, what seemed to be an unstoppable decay of the Greek Socialists after they embraced full-heartedly the neoliberal Third Way in the late 1990s.

You cannot imagine the anti-austerity movement in Greece and the various solidarity networks formed all around Greece at the times of crashing austerity without the Social Forums experience. In [the Greek parliamentary elections in] 2012 or 2015 it only seemed natural to work together with people coming from the most different political backgrounds (excluding fascists of course) that have been radicalized by extreme austerity. Today, in the ranks of SYRIZA you can find voters and militants that used to be active not just in [social democratic] PASOK, but also in [conservative] New Democracy or the [right-wing] Independent Greeks party. It is still our defining strategy that only progressive fronts of variable geometry can succeed in bringing about change.

In Genoa we felt absolute fear, but also an absolute sense of freedom and emancipation. Perhaps we underestimated the power of our opponents; perhaps momentarily we felt that a symbolic conflict with the state was a total conflict with the mighty adversary;

In Genoa we felt absolute fear, but also an absolute sense of freedom and emancipation. Perhaps in those moments, as the Wu Ming collective [Italian novelists], which participated in civil disobedience, later admitted, we underestimated the power of our opponents and overestimated our forces; perhaps momentarily we felt that a symbolic conflict with the state – carried out on a symbolic battlefield – was real, total conflict with the mighty adversary; perhaps momentarily we put aside what Gramsci wrote in Prison Notebooks, that the struggle to break the consensus – and thus the hegemony – of the ruling bloc is not a speed race, it is not a one-day battle on a street, but it is a long-term mission.

On the other hand, Genoa demonstrations and the Anti-Globalization Movement have also reminded us, in the best way, of Gramsci’s thoughts, that this constant struggle not only stands in the fight against economic subjugation, includes not only the proletariat, but spreads in every space and field associated with the state and where, through the consolidation of consensus, its powers are reproduced: in schools, in the media and in places of cultural creation, in trade unions, even in churches or football stadiums.

In Genoa our identity has changed: We understood that sectarianism kills the Left and that unity through diversity is our main weapon. We also learned that what makes you an actor of social change is not the verbalism of your slogans, but your ability to transform the people’s fear into hope, their agony into concrete, political alternatives.

But in Genoa and the Anti-Globalization Movement in general, our identity has also changed in terms of political practice: We comprehended that people with different practices and aspirations may join the same social struggles and even the same political projects; that sectarianism kills the Left and that unity through diversity is our main weapon against our powerful opponents. We turned our attention to the victorious Latin American political projects that managed to win and exercise power, with their victories, but also with their defeats and their contradictions. Thanks to the Social Forum process, we managed to create the Party of the European Left in 2004.

We also learned that what makes you an actor of social change is not the verbalism of your analysis and slogans, but your ability to transform the people’s fear into hope, their frustration into collective action and their agony for their daily life into concrete, political alternatives based on what Alexis Tsipras called – in a discussion with Evo Morales – in 2019, “revolutionary realism”.

Every year, around these days, several of us who were part of the 1,800 Greeks of Genoa, feel strange. It is as if our body refuses to forget. In 20 July 2021, we will remember the 20 years that passed since the days that changed our lives forever. It is our duty, but also of the younger generation of activists, not to forget, neither the days of Genoa nor Carlo Giuliani. It is our duty to become better, more useful to the social majority as leftists and progressives. To analyse our defeats and become wiser for the battles of the future. It is also our utmost duty, in these dramatic days of consecutive, multi-faced, existential crises and dead-ends of neoliberalism, to use all the tools we obtained through the Social Forum process and start rebuilding an international – why not global –  project of political alternatives, which is so terribly missing today.

We owe it to Carlo, but also to ourselves, who were present in Via Tolemaide that wild, life-changing day.