Layoffs of 350 riders in Berlin come after wild cat strikes, which took place over June and July, re-started last weekend

The Gig Economy Project, led by Ben Wray, was initiated by BRAVE NEW EUROPE enabling us to provide analysis, updates, ideas, and reports from all across Europe on the Gig Economy. If you have information or ideas to share, please contact Ben on 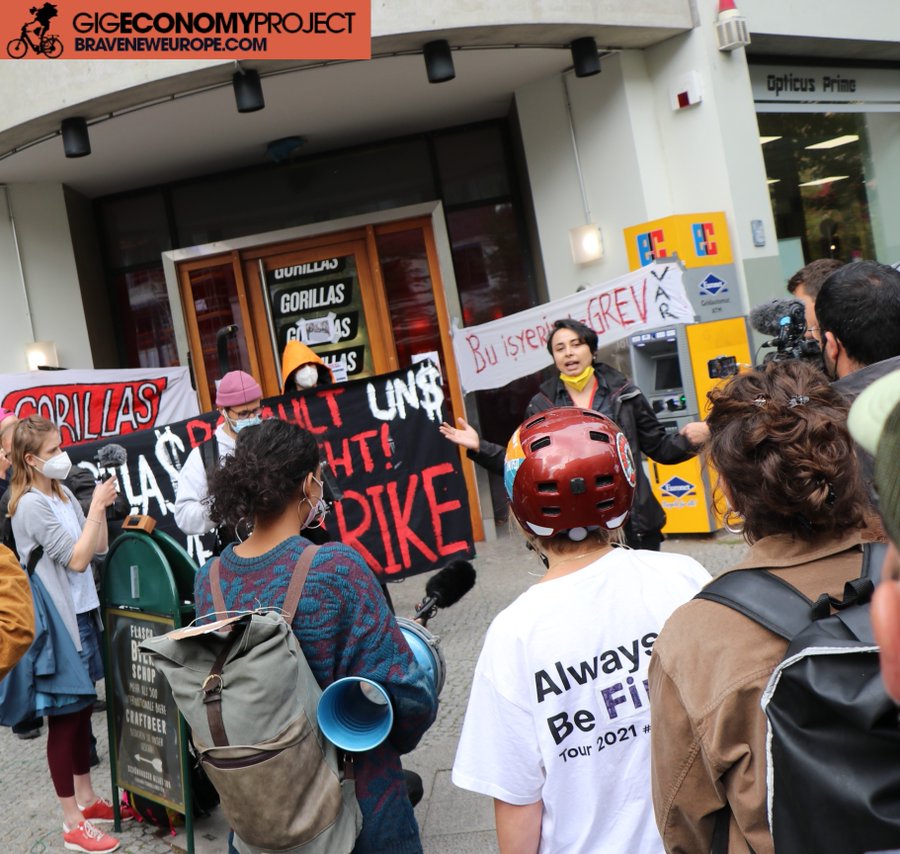 Gorillas, the German super-fast grocery delivery platform, has began firing large sections of its workforce on mass for participating in wildcat strikes and protests for better working conditions at the company.

The Gorillas Workers Collective, which has been organising the strikes, said that at three Gorillas’ warehouses in Berlin – Kreuzberg, Mitte and Tempelhof – almost the entire workforce had been given letters of termination. Around 350 Gorillas’ workers in total have received termination letters so far.

“We hereby terminate the existing employment relationship with you for good cause without notice,” the letters state, giving no explicit reason for the termination. Spiegel reports that in some cases the names of the sacked riders have been misspelt.

Wildcat strikes took place over June and July in Berlin, and they re-started last weekend in response to the sacking of a rider, allegedly for union organising, spreading quickly to other ‘dark stores’, including in Cologne, and including for the first time the ‘pickers’ who prepare the food for delivery as well as the riders. Private security firms were hired for the first time to seek to prevent the striking workers from blockading the warehouses.

In response to the mass sackings, protests were held outside Gorillas’ headquarters, and solidarity actions on Wednesday took place in support of the riders in other German cities and in the Netherlands.

The Gorillas Workers Collective stated on social media that Gorillas had brought in outsourced labour from ‘Zenjob’ to replace the entire workforce at one of the company’s warehouses, WH BKIEZ, except for just a couple of contracted workers.

Gorillas employ their workers directly and the CEO Kağan Sümer has sought to present the company as ethical when it comes to workers’ rights, stating that they “do not exploit anyone”. However, the strikes and leaks from the company have shown a different picture. A message leaked this week from the company’s ‘Slack’ internal messaging system shows Sümer stating “we had to fire one of our drivers…apparently he was organising”.

Sümer had previously told striking riders in July that “I would never fire someone because they were on strike”.The demands of the striking workers have been consistent over many months: better equipment for the safety and health of the workers, to always be paid in full and on time, and a better system of shift allocation. ‘Klassegegenklasse’ reports that the algorithm for managing shift schedules can see a rider finish at 12pm on a Friday and start at 7am on a Saturday. The riders have sought to organise a Works’ Council (a workplace organisation which entitles workers to a voice in the company under German industrial relations laws) but say the company has repeatedly sought to block the move.

In July, the Gig Economy Project spoke to Zeynep Karlıdağ of the Gorillas Workers Collective about the strikes, who said that they used the tactic of wild cat strikes because “this is the only way that the company hears our voices”.

Gorillas was only established in spring last year and has been described as “Europe’s fastest growing start-up”. The company raised $950 million in a new round of venture capital funding in September and now is valued at over $3 billion. Yet the strikes and the company’s handling of them has led to questions about the competence of the management.

An example of desperate management tactics came during the most recent strikes, when two Gorillas’ managers dressed-up incognito as riders and approached a warehouse where workers’ were striking, stating that “they didn’t want to strike but to ride”. The Gorillas Workers Collective only identified them as senior managers afterwards, describing the strike-breaking attempt as “pathetic”.

Labour law experts have also questioned the legality of Gorillas’ mass firings, with professor Gregor Thüsing of the University of Bonn stating that “he drivers should have been warned in principle, in writing or orally”, before the contract could be terminated.

Elmar Wigand from the ‘Action against Labour Injustice’ alliance also said of the appearance of two managers pretending to be riders: ““An embarrassing move. If Gorillas do not change their management level and the protests continue, the company has no future.”

Wigand described the mass lay-offs as “a serious mistake”, adding that it “will set off a shock wave. The drivers are networked across many cities across Europe – and thus [can] send a signal to investors.”

To support the Gorillas Workers Collective, you can donate here.

Striketober and the Gig Economy

Gig work in India and the role of trade unions