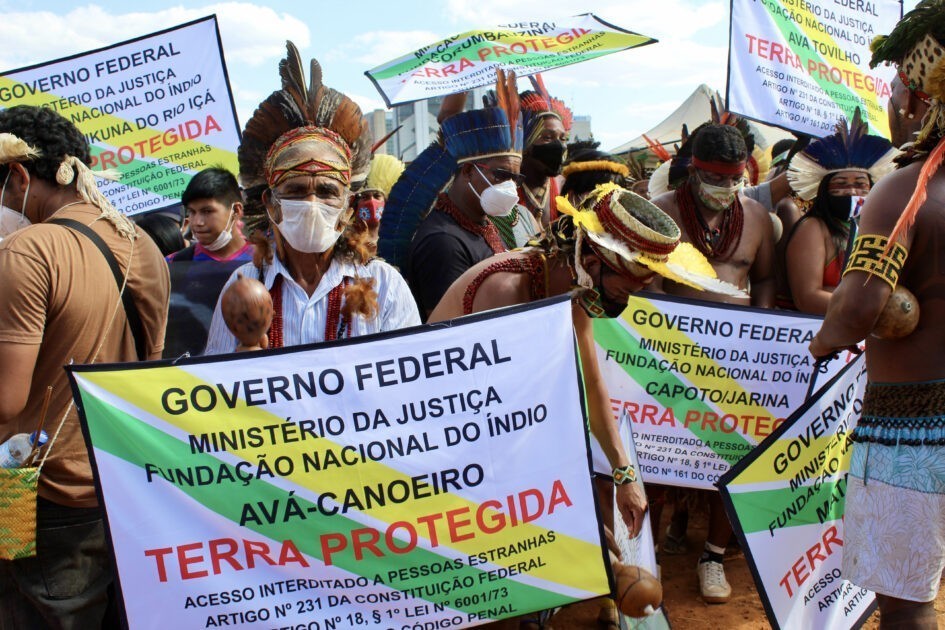 Over 6,000 indigenous people from approximately 170 peoples are protesting at the Struggle For Life camp in Brasilia against the Time Limit Trick. © Survival

Indigenous peoples from all over Brazil are protesting in a week-long action in Brasilia against the “Marco Temporal” (or “Time Limit Trick”), draft bill 490 known as the “Bill of Death”, and a series of other genocidal plans and actions by the Bolsonaro government.The “Struggle for Life” (“Luta pela Vida”) global action is led by APIB – the Association of Indigenous Peoples of Brazil. Indigenous protestors hold a vigil in Brasilia on the night before the Supreme Court begins its vote on the Time Limit Trick. © Survival

APIB have held a vigil outside the Supreme Court, which is due to restart voting on the Time Limit Trick, a proposal put forward by the agribusiness sector claiming that indigenous peoples only have the right to territory that they were physically occupying on October 5, 1988 – the day the current Constitution came into force.

A series of actions have taken place across the globe, including in San Francisco and London, by protestors calling for an end to the genocidal attacks being waged by President Bolsonaro and his supporters against Brazil’s indigenous peoples. Protest outside Brazilian Embassy in London on the day the Supreme Court begins its ruling on the Time Limit Trick. © Survival

Large parts of Xokleng land and other indigenous territories were allocated to
Europeans settlers encouraged by the Brazilian government early last century. The government also financed a so-called “Indian-hunting militia”, which accelerated the colonial land grab and the genocide of indigenous peoples. The Supreme Court could now set the effects of these and subsequent evictions in stone, establishing a precedent which would have far-reaching consequences for indigenous peoples in Brazil.