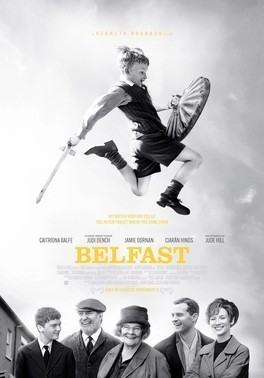 I went to see ‘Belfast’ by the actor and Director Kenneth Branagh with an open mind, and I left wanting to like it more than perhaps I did.  It’s an autobiographical film of a small Protestant boy and his working class family at the beginning of the Troubles.

Since I was once a small Protestant boy at the beginning of the Troubles, and living in a working class area, I came with my own experience as a comparison.  Despite this being a political blog, and almost obliged to pen a political review, I’ll do that less than I would otherwise because of this.  An autobiographical review then of an autobiographical film.

So, some things struck me that perhaps others wouldn’t notice and are probably irrelevant to any reasonable review, but there are points I really would like to make.  I’ve written a long series of posts on the start of the Troubles but this one relates particularly to the initial period in the film and provides some political context.

My wife informed me that a friend of hers told her that the film was from a Protestant view.  I’m not sure if this was a criticism but it is obviously true.  The story of a Catholic family in a mixed, but mainly Protestant street, would be more harrowing.  It could easily be more ugly and bloody.  It is, however, no criticism of the film to say that this is not what the film is about, or ever could be.

A review of the film, or rather of the reality of the film’s backdrop, by Max Hastings in ‘The Times’, who covered the events as a journalist, mentions at the end of it – of Branagh – that ‘back in 1969 his tribe bestrode the dunghill, while Catholics suffered at Protestant hands.’

Whether intended or not, this gives the impression that Branagh belongs to a tribe and that this tribe, without distinction, oppressed all Catholics.  At which point I’m compelled to say that he’s missed the effing point.

For the point of the film, in so far as it can be interpreted as a political film, is not that all Protestants oppressed Catholics; but rather that some didn’t, that some even opposed it, and that some had to get out because they too became targets of loyalist bigots on account of this refusal.  To get all autobiographical myself, my own family did not oppress Catholics, were not even unionist in politics never mind loyalist, and actually supported the civil rights movement as some other Protestants did.

This matters, because it points to an alternative to forever being a creature of your ‘tribe’ both then and now.  I don’t see any nostalgia in the film for any tribe and the cliched love across the sectarian divide is not overwrought as it so often is.  Whatever saccharine aspects the film has, it avoids any empty self-exoneration because none is required.  If anything, the Catholic characters are hardly developed; to repeat, that’s not what the film is about.

As it proceeds it becomes less political and more personal. For this reviewer the personal elements are often more evocative of my own back story than the political.  The discovery by the small boy recalls my own that there are such things as Catholics and Protestants; that we were Protestants and some people expected us to hate Catholics, although without me having a clue why, or them for that matter.

On a lighter note, I remember going to see ‘Chitty Chitty Bang Bang’ but I refuse to buy the portrayal of the family as hard up.  They have a phone and the boy has more toys than I could ever have dreamed of.  They do say they haven’t had many holidays but however many they had was exactly the number more than me.

We didn’t have any religious upbringing, which is rather more important to the characters in the film, but the role of the organised, determined and principled woman in holding the family together was from my experience typical.  Hiding under the table when there was a riot outside reminds me of doing the same when there was a gun battle in my street.  The uncertainty of leaving also reminds me of my own experience although I didn’t have the film character’s desire to stay.

On other aspects Hastings is right, especially that Belfast was a much uglier city than portrayed in the film.  The streets are too clean and tidy as is the entry at the back, which in my granny’s Shankill Road home was a rotting tip the whole way down.  There are no painted kerb stones and no flagpole holders on the houses, not to mention flags sticking out of them.

The film is too soft in this respect, so that the loyalists are not dark, repellent and menacing enough, and the film doesn’t therefore truly portray the stifling and oppressive environment of the time and place.  Again, it’s not that sort of film because it arises from an escape that is not only the author’s history but, he appears to believe, the history of the place full stop. It is ultimately a story of good fortune because that’s what came out of it.

The film is a simple story made vivid by the excellent performances from all the cast.  Only one scene borders on the ridiculous and if the background just about passes muster, the accents and language do so as well.  Enough certainly for the vast majority of audience which will watch it.

My main qualification for being a critic is that I am comfortably at home being critical, and as I say, I left wanting to like it more, and maybe I will.   It reminds me of something I heard a long time ago – that Belfast is a great place to come from.