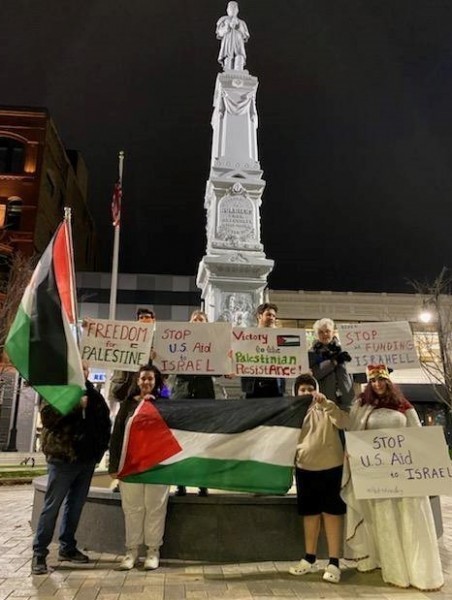 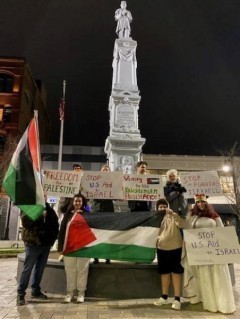 Grand Rapids, MI – The Palestine Solidarity Committee of Grand Rapids organized a sign-holding in conjunction with groups across the world recognizing the International Day of Solidarity with the Palestinian People, November 29. The event was part of a call to action put out by the US Palestinian Community Network.

Drivers were met with Palestine flags and chants of, “From the belly of the beast – no justice, no peace!” and “Hey, hey, ho, ho! The occupation’s got to go!” at the busy intersection. A few onlookers joined in on the call to “Free Palestine,” while others honked their horns in support.

“I would honk if I had a horn,” said a passing cyclist, raising his fist.

The event opened with chanting, followed by two speeches from Mike DeRuiter and Hannine Aqel. DeRuiter connected the struggles faced by working people in receiving basic healthcare to the annual $4 billion of aid sent to Israel for the slaughter of Palestinians.

DeRuiter stated, “Why can’t I afford basic necessities while so much money is going to Israel? In the West Bank, they just destroyed a school,” referring to the new Isfey al-Fauqa school demolished last week by occupation forces in Masafer Yatta. The school was attended by 22 students, aged six to eleven.

Hannine Aqel, a Palestinian living in Grand Rapids, gave a moving speech followed by a poem she had written. “Parts of our culture and our revolution have been completely erased or misconstrued,” said Aqel. “I see it in American media, where the same rules don’t apply to us. We are not‘freedom fighters or revolutionaries; we are ‘terrorists and extremists.’”

Aqel’s speech detailed her own identity struggles as a Palestinian woman, and her grappling with recognizing portions of her family still live under occupation.

“The guilt ate me alive because I knew my family in Palestine would never get to see what I’m seeing or experience what I’m experiencing,” said Aqel. “They say ‘Janna is enough’ or ‘Heaven is enough’. I know they are right, but has the world failed them so badly they can only dream of life after death?”

The speech ended with a beautiful poem she wrote, describing an embrace of her identity as a Palestinian.

It’s as if God moved me from Her dirt

Or as if my tears come from the Dead Sea

Rally for Palestine in downtown Dallas

Labour members overwhelmingly back motion in solidarity with Palestine