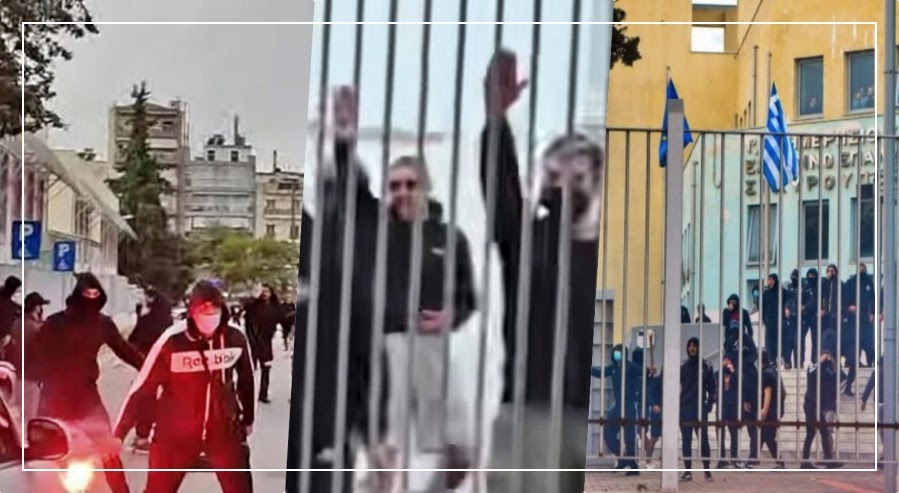 A mob of fascists and neo-Nazis wearing hoods and crash helmets attacked an anti-fascist rally of students in a high school in the Greek city of Thessaloniki on Tuesday morning. The event took place outside the EPAL vocational school in the suburb of Stavroupolis, when a group of approximately 30 fascists came out of the school premises and attacked the rally with bats and knives leading to at least two injuries.
According to witnesses the hooded fascists had gathered behind the school building earlier in the day to organize the assault of the rally. It is characteristic that some of them were seen in video footage performing the Nazi salute. In a statement issued later, the Nazi criminal group of Golden Dawn (whose leading members have been imprisoned, sentenced for operating a criminal organization) “congratulated” the fascists for attacking the student’s rally.

Numerous trade unions and students’ associations have condemned the fascist attack. In a statement, the local Party Organization of the Communist Party of Greece (KKE) condemns the stance of police, as well as the school’s administration.

The statement reads: “The stance of the police in unacceptable. At the time of the fascist attack the police forces were dispelling the parents, the pupils and the students by throwing chemicals and tear gas, thus backing the fascist fores. The responsibilities of the school’s administration, as well those of the administration of Secondary Education, are huge, because under their tolerance the school became a base of fascists”. The KKE also calls the government to take responsibility for the activity of fascist cells in the schools.

An anti-fascist rally has been scheduled for today, Wednesday, at the central square of Stavroupolis.