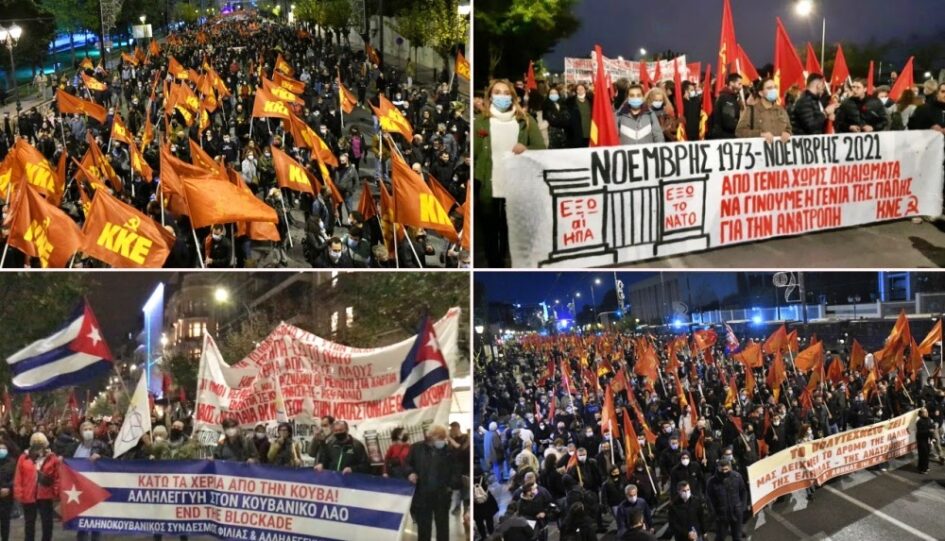 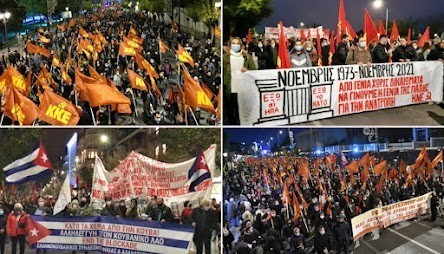 Thousands of people took part in the annual rallies held in Athens, Thessaloniki and other major Greek cities by the Communist Party (KKE) and its youth wing (KNE) on Wednesday 17 November, in order to commemorate the 48th anniversary of the 1973 Polytechnic Uprising against the military Junta.

In Athens, the demonstrators marched peacefully through central streets of the Greek capital, shouted anti-imperialist slogans (

“Since the Polytechnic, the enemy remains the same: NATO, governments, capitalism”) and ended outside the U.S. Embassy where they burned flags of NATO and the United States.

At the head of the rally were the members of the Association of Imprisoned and Exiled by the Greek Junta (SFEA), while other blocs included the Peace Committee for International Detente and Peace (EEDYE), the Federation of Greek Women (OGE), the All-Workers Militant Front (PAME), trade unions and numerous students’ associations and groups.

The Athens march was attended by the General Secretary of the CC of the KKE, Dimitris Koutsoumbas, who made the following statement to journalists: “The messages of the Polytechnic Uprising are also timely today, because both the bourgeois dictatorship existed in 1973 and the bourgeois democracy that followed in 1974 serve and express the interests of monopoly capital and imperialist alliances of US and NATO, thus confirming that only the people can save the people”.

In Thessaloniki, Greece’s second largest city, this year’s rally was particularly big with more than 14,000 demonstrators. The participants marched through the city center and stopped outside the U.S. Consulate where they shouted anti-imperialist slogans and burned the American flag. This year’s anti-imperialist march acquired also a character of solidarity towards the Cuban people and government in face of the recent imperialist counterrevolutionary machinations.

It must be reminded that last year, on November 2020, within the escalation of authoritarianism, the conservative ND government had banned anti-imperialist demonstrations and any gathering of more than three people across the country, on the pretext that the march would be a health ‘time bomb’ due to the COVID-19 pandemic. Back then, the rally of the KKE had been violently attacked by riot police forces in the center of Athens.