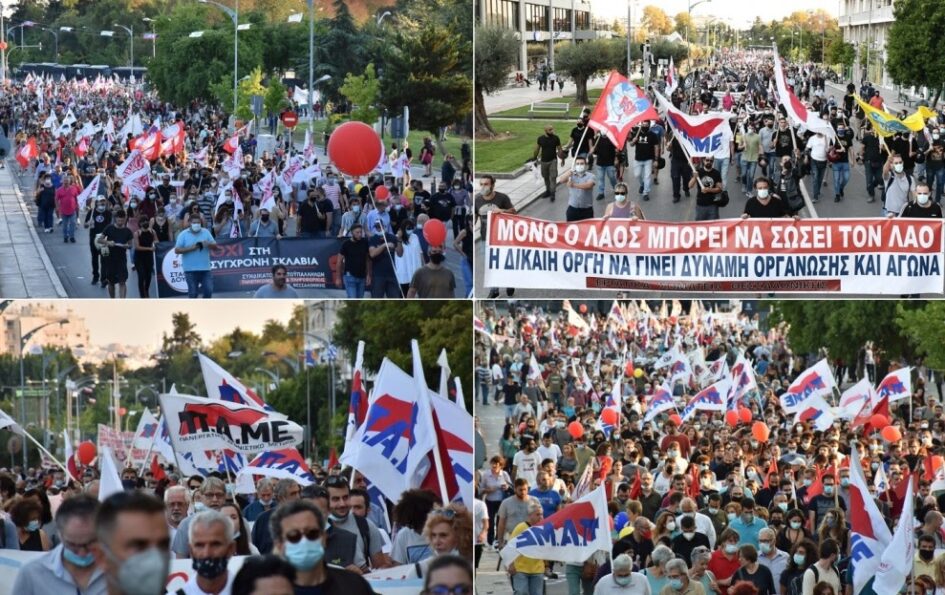 Thousands of workers, self-employed people, farmers, pensioners, young men and women participated on Saturday evening in a massive rally organized by the All-Workers Militant Front (PAME) and Trade Unions on the occasion of the inauguration of the 85th Thessaloniki International Fair by Prime Minister Kyriakos Mitsotakis.

Under the slogan “Only the people can save the people. The justified indignation must become a force of organization and struggle”, numerous protesters from Thessaloniki and the broader region of Central Macedonia sent a militant message to the ND government and the employers.

The protesters gathered at YMCA Square and marched through the city center, holding banners and shouting slogans such as “No cog turns without you, Worker you can live without bosses”. At the same time, in an effort to intimidate the people and create an environment of fear in the city, Mitsotakis’ government deployed over 5,000 police officers, including police helicopters and drones.

The rally was attended by the General Secretary of the CC of the Communist Party of Greece (KKE) Dimitris Koutsoumbas who made the following statement to journalists:

“The ND government generously gives privileges to the big capital, while at the same time it gives to the working people a few small benefits, crumbs and promises which disappear later under the explosion of prices, under the change of labor relations and the overthrow of long-time workers’ rights and achievements.


The only way for the employees of the private and public sector, the self-employed workers of the city and countryside, is the struggle, the mass, class-based, united struggle, in every place, in every branch, in every region, nationwide and co-ordinated, and in this struggle the KKE will be every day, every time, on the forefront”.

In his speech at the inauguration of the Thessaloniki International Fair, Premier Mitsotakis unsuccessfully tried to repair the political damage caused by his government’s anti-people policies. The outcome of his speech, despite his promises about small benefits, is that, once again, the actual winners of the ND government’s policy are the big businesses and the class of capitalists.