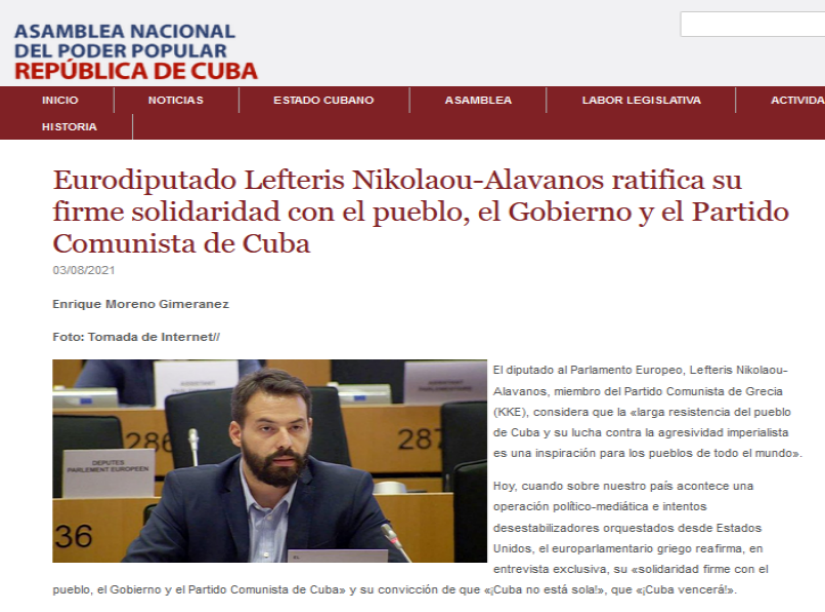 The member of the European Parliament, Lefteris Nikolaou-Alavanos, from the Communist Party of Greece (KKE), considers that the “long resistance of the Cuban people and their struggle against imperialist aggressiveness is an inspiration to the peoples of the whole world.”

Today, when a political-media operation and destabilizing attempts orchestrated from the United States take place over Cuba, the Greek MEP reaffirms, in an exclusive interview, his “firm solidarity with the people, the Government and the Communist Party of Cuba” and his conviction of that “Cuba is not alone!”, that “Cuba will win!”

In relation to the imposition for more than six decades against our country of the economic, commercial and financial blockade by the United States Government, intensified in times of COVID-19, Nikolaou-Alavanos emphasizes that «for more than 60 years the United States has imposed an inhumane blockade against Cuba and its people, which has caused immense difficulties and problems for the people of the Island of the Revolution, such as deprivation of goods, trade and services.

“In pandemic conditions, the US criminal blockade prevented Cuba from obtaining medical and technological supplies, forcing Cuba to fight the pandemic supported by its own forces. And he did that successfully, managing to protect his people better than most capitalist countries in the world, “he said.

Likewise, it denounced this criminal policy against Cuba and demanded its immediate lifting, as well as the cancellation of the 243 sanctions applied by the previous US Administration, in force by the Biden government, which has just announced more unilateral coercive measures against our country.
Regarding the recent destabilization attempt and the imperialist campaign against our Homeland, he pointed out that “the organized provocation and hypocrisy of the imperialists cannot be disguised” and stressed that the difficulties in Cuba are the result of 60 years of inhuman economic blockade.

«The US, together with the anti-Cuban mafia that operates in its territory and with very few forces within Cuba that support its plans, tried to use these events to orchestrate demonstrations with anti-communist and counter-revolutionary slogans. These demonstrations demanding the overthrow of the Cuban government were magnified through a well-paid propaganda mechanism in the press and on social media. In a totally provocative way, they called for the realization of an imperialist “humanitarian intervention” in Cuba, using as a pretext the difficulties caused by the US blockade. Conclusions can be drawn regarding the Biden government, whose election was accompanied in many countries with false expectations and illusions, regarding which the Communist Party of Greece (KKE) firmly from the outset warned that the election of Biden would mean new great dangers at the expense of the peoples of the world, “he said.

In this regard, he added that his Party –the KKE– “unequivocally condemns the provocative actions of the imperialists who seek to overthrow the conquests of the Cuban people and their Revolution. The Cuban people, the Communist Party and the Government mobilized decisively and quickly so that the unacceptable imperialist plan has the appropriate response and to inform the peoples of the world about the events and that a great wave of solidarity is expressed with the Cuban people. The KKE condemns any type of imperialist scenario of intervention in Cuba, under the pretexts of so-called “human rights”, recalling that, under this pretext, for decades, the US, NATO, the EU have carried out imperialist crimes. most atrocious.

Regarding the sending by the Biggest Antilles of brigades of health professionals to various regions of the world, including Europe, to contribute in the fight against the pandemic, the member of the European Parliament, Lefteris Nikolaou-Alavanos, declares that a despite the fact that Cuba faces unacceptable sanctions, such as the US criminal blockade, which intensified during the pandemic, it carried out its humanitarian and internationalist duty, just as it has firmly done all these years.

«Cuba mobilized the “Henry Reeve” Medical Contingent, sending health professionals with great dedication to dozens of countries, in EU States while their health systems were failing, contributing to the treatment of more than 250,000 people. Cuba also sent humanitarian aid to states that have imposed sanctions against it.

«It is not by chance that this lofty expression of solidarity has become an object of worldwide admiration that led to the initiative of proposing “Henry Reeve” International Contingent of Doctors Specialized in Situations of Disasters and Serious Epidemics for the Nobel Peace Prize . The KKE has not only supported this initiative from the outset, as a minimal tribute to the Cuban health professional heroes who are the result of the conquests of the socialist Revolution, but under our proposal the demand was adopted by the Group of Friendship with Cuba that exists in the European Parliament ”, he stressed.

–In your opinion, how important is the Political Dialogue and Cooperation Agreement signed between Cuba and the European Union for the strengthening of relations between our country and the rest of the members of the regional bloc?

-Cuba has the right to sign economic, commercial and other treaties, bilateral and multilateral, to satisfy the modern needs of its people, without conditions or limitations imposed by third parties. The EU, from its nature as an imperialist union, cannot contribute to the development of relations between countries and peoples of mutual benefit and equal peers. It has its own objectives and goals, and among them the fundamental thing is to expand the interests of the European monopolies in the framework of imperialist competition. It is characteristic that the EU has consolidated an entire “industry” of production of motions against Cuba, of support to NGOs and the so-called “civil society” organizations with anti-Cuban activity, starting from the basis of said Treaty and the various clauses for the “Human rights” and their alleged “violation”.

«The latest unacceptable official statements from the EU and the European Parliament, such as J. Borrell, the Chairman of the Parliament’s Foreign Affairs Committee, McAllister, representatives of all Political Groups that push even more on the alleged“ violations ” On the part of the Cuban Government, they speak of alleged “arbitrary detentions, torture and disappearances”, things that have nothing to do with reality, they expose the position of the EU towards the people and the Government of Cuba, and the dangerous plans that they orchestrate at their expense.

– How do you assess the current inter-parliamentary ties between your country and Cuba?

– The Greek Government of the “New Democracy”, which in the opinion of the Prime Minister is a “reliable and presumed ally of the USA”, further deepens the strategic treaties signed with the USA by the previous government of SYRIZA and while the imperialist intervention plan continues to develop, it assumed all the provocative pretexts of the Biden Government’s plan at the expense of the people and the Government of Cuba. The Greek Government ran to respond to the call of the US State Department to sign the inadmissible and provocative joint declaration of the Ministers of Foreign Affairs, among which is a bloc of reactionary governments such as Israel, Brazil, Austria, Poland, Ukraine and others.

«This dangerous and inadmissible position of the Greek Government, which consists of a direct intervention in the internal affairs of an independent State and involves our country in dangerous scenarios and plans, does not correspond to the opinion of the Greek people who have historically expressed their solidarity and his support for the Cuban people and firmly condemns the imperialist plans. With the energetic activity of the Communists, this new and dangerous development will meet with the total rejection and condemnation of the people and youth of Greece.

– Your message to the Cuban people …

–We express our firm solidarity with the people, the Government and the Communist Party of Cuba. The conquests of the Cuban Revolution, the struggle of the Cuban people, the internationalist action of your country, are an inspiration for the workers-popular movement of Greece, which is decisively shoulder to shoulder with Cuba and its people. The long resistance of the Cuban people and their struggle against imperialist aggressiveness is an inspiration to the peoples of the entire world.

“Despite the US criminal blockade, and in pandemic conditions, Cuba was able to develop effective vaccines, protect the lives of her people with its own forces, and send internationalist medical aid to other peoples.

«Today, Cuba is not alone! The provocations of the imperialists will not pass! The fight continues! Cuba will win!».