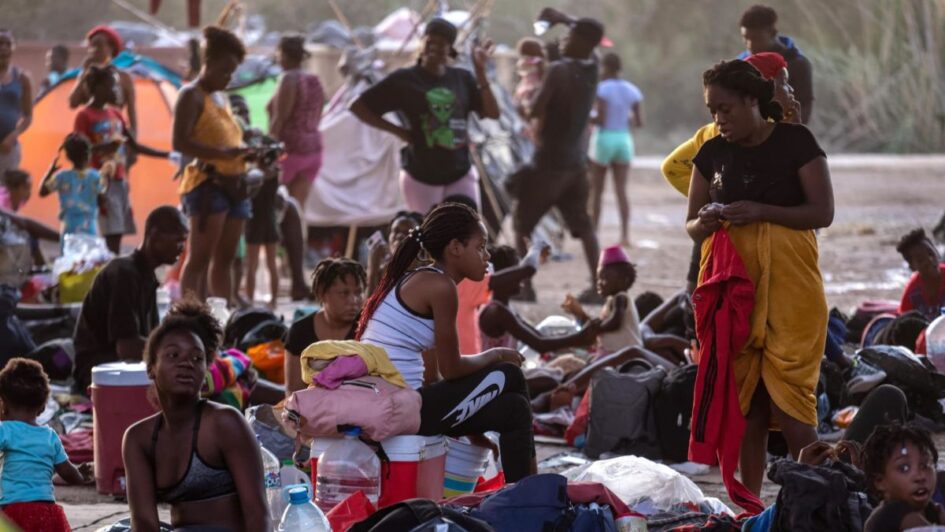 On August 14th, the southern third of Haiti was hit by a 7.2 magnitude earthquake, resulting in a death count of up to 2,200 people and widespread damage. The natural disaster hit following the assassination of President Jovenel Moïse, amid COVID-19 and hurricane season.

In addressing the situation in Haiti after the earthquake, US president Joe Biden stated, “The United States remains a close and enduring friend to the people of Haiti, and we will be there in the aftermath of this tragedy.” Yet, while Cuba sent doctors and Venezuela sent food and medicine, the Biden administration sent SOUTHCOM forces and airplanes full of asylum seekers back to Haiti.

Last Wednesday, despite the ongoing political, economic and environmental disasters occurring, Immigration and Customs Enforcement (ICE) expelled 86 Haitian nationals from the United States and flew them back to Haiti, including children as young as three. The Biden administration has continued its aggression against Haitian migrants through the use of public health order, Title 42. Although a federal judge has blocked the use of Title 42, a Trump era order that was used to expel migrant families at the US border, Biden and his administration have appealed.

This ongoing disaster highlights the type of punitive measures against Haitian migrants that sends a clear message to all, “no matter what the US does to your country, do not come.” As made evident by VP Kamala Harris’ remarks to Guatemalans (and subsequently repeated by press secretary Jen Psaki), the Biden administration’s approach to immigration policy uses legality as a shield for injustices. In this way, “do not come” is seen as migrant-centered, positioning the journey as far more dangerous than the violence in their home countries brought on by the US and its allies.

While the images of thousands of Haitians, Afro-Colombians, west Africans, and Afro-Guatemalans stuck in the border city may be shocking, they can not be observed separately from Western imperialism and it’s allied nations that are responsible for the trajectory of this crisis.

Although praised widely as a leading left progressive in Brazil, Luiz Inácio Lula da Silva’s role in what we are seeing in images at the border can not be discounted. Doing George W. Bush’s dirty work through the United Nations Stabilization Mission in Haiti (MINUSTAH), Brazil, under Lula, took lead on the military occupation of Haiti following the 2004 ousting of democratically elected Jean-Bertrand Aristide. MINUSTAH was the only UN peacekeeping mission in history deployed without a peace agreement. As Black Alliance For Peace member Jemima Pierre explained previously for the Black Agenda Report,

“Since 2004 the streets of Haiti have been pregnant with the constant and terrorizing presence of heavily armed troops in tanks and pick up trucks. Under Brazil’s leadership, MINUSTAH has been linked to a number of atrocities against the Haitian people, demonstrating that it is often incapable of communicating with Haitians in any other language than that of brute force . In fact, former Brazilian MINUSTAH force commander, Augusto Heleno Ribeiro Pereira complained in 2005 that his soldiers were “under extreme pressure from the international community to use violence.” The most egregious were the massacres in the poor neighborhood of Cite Soleil.”

The violent Brazilian military occupation of Haiti resulted in mass instability causing many to flee into South America. After the devastating earthquake in 2010, many Haitians migrated down to Brazil for low-waged work in preparation for the 2014 World Cup and the 2016 Olympic Games in Rio de Janeiro. After jobs came to an end in Rio de Janeiro, many were forced out by anti-Haitian sentiment and policies, and traveled (by foot) to the U.S. border, including through a Panamanian jungle, the infamous Darien Gap.

The Biden administration does not have clean hands in any of this. While the Congressional Black Caucus members have condemned the actions at the border as treatment that “will not be tolerated”, the actions of border control can not be separated from the Biden administration it falls under. In fact, it should be noted that among the chorus of voices protesting the graphic violence depicted at the border, many remain silent about the day to day meddling that has created the conditions for mass migration. The continuous deportations to Haiti regardless of its inability to absorb huge numbers of refugees is reprehensible, at best and a death sentence, at worst. As the Haiti Action Committee notes in their recent statement, all of this is taking place in the backdrop of western imperial interests that have “rigged elections, looted the country and weaponized death squads to attack and terrorize the population.”

An article recently released by The Intercept reminds us that it was Reagen who first set the stage for the conditions that we see today at the border. In the 80s, his administration led a crusade against Haitian asylum-seekers, turning back thousands and imprisoning more in what is now called the Immigration and Customs Enforcement’s Krome Detention Center in Dade County, Florida. This mass imprisonment signaled that, in the 80s, the US government had begun to move beyond the fear of optics. A fear articulated by then-Deputy Attorney General Rudy Giuliani, that the detention centers “could create an appearance of ‘concentration camps’ filled largely by blacks.” It should come as no surprise then, that in 2021, border police on horseback carrying whips reigns assaulting migrants at the border occurred without a second thought.

As the situation becomes more dismal and Haitians are attempting to revolt, reports yesterday announced that Biden is turning Guantanamo Bay back to its original use: a prison for Haitian Asylum seekers. In 1991, Haitians became the first illegal detainees at Guantanamo, during the George HW Bush administration. The Bush administration was notorious for it’s forced return of Haitain immigrants without hearings. It was Bush’s administration that backed the first coup against Aristide that same year.

The Biden administration’s complicity can not continue to be watered down to an abstract concept of “lesser evilism” that progressive liberals want to pivot to. An administration that just weeks ago was being called upon to “free” Africans in Cuba is complicit in the inhumane treatment of countless Africans seeking asylum. The U.S’ use of the “Responsibility to Protect” should be viewed as nothing less than cynical.

The colonial relationship the US has maintained with Haiti since the first occupation in 1915 directly strokes the suffering inside of Haiti and at the US-Mexico border today. The barbaric treatment of Haitians has been supported and encouraged by each US President through occupation, coups, interventions via the CORE group, OAS and the UN, and land grabs by US corporations. Undoubtedly, US policy regarding Haiti is nothing more than contempt for an African nation that dared to free itself and others from Western hegemony.

*This morning US Special Envoy to Haiti, Dan Foote, resigned citing a “deeply flawed” US policy toward the nation that includes continued political intervention and the administration’s recent decision to ramp up deportations.