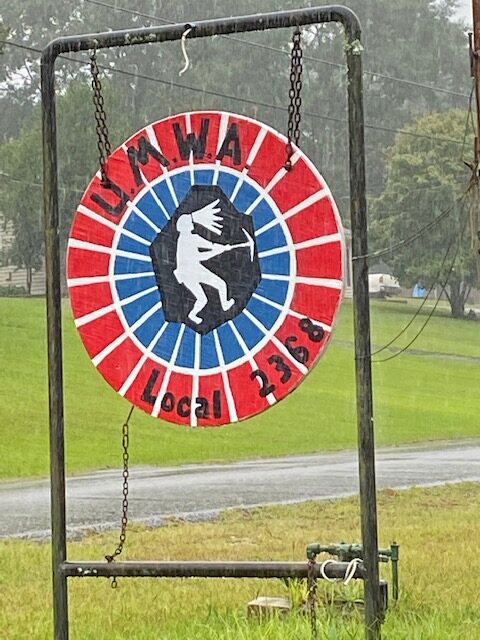 Sept. 15 — Here in Central Alabama, the courageous strike by 1,100 Brookwood coal miners — United Mine Workers Locals 2245, 2397, 2368 and 2427 — continues into its sixth month. The workers are holding out against mega-company Warrior Met, backed by financial behemoth BlackRock. In February that global firm ranked second in the world in coal holdings, with investments valued at more than $84 billion.

The miners are hanging on with strike pay, second jobs and help from spouses and families. UMWA Auxiliary Locals 2368 and 2245, headed by president Haeden Wright, have delivered significant support by organizing a Strike Pantry for food, clothes and school supplies.

As a member of the National Writers Union, home for a visit to my county where many of the striking miners live, I wanted to show support for my union siblings. So I headed out to help transport supplies to the pantry.

To pick up the food, I met miner Braxton W., auxiliary members Sherry and Leslie and children at Grace Klein Community/Feed BHM on Old Rocky Ridge Road in Birmingham. Tons of donated food flows through that distribution center to the 14% of Alabama’s people who face hunger — including the striking miners.

We packed flats of bread, canned peas and peaches, boxes of dried raisins and cranberries, snack bars, cake mixes, frozen pizzas and much more into two pickup trucks and an SUV. Then, driving 30 miles through pouring rain past paper-mill pine plantations, we delivered our supplies to the Local 2368 meeting hall in Brookwood, passing by yard after yard with signs “On STRIKE! No contract, no coal!” “United we stand with UMWA members” and “We are One.”

UMWA International President Cecil Roberts, who also spoke to the rally, commented earlier: “What Warrior Met has offered is just a tiny fraction of what workers gave up five years ago. These workers are tired of being mistreated; they are tired of being forced to work and missing time with their families. Warrior Met knows it is exploiting these workers, and it’s time for it to stop.” (umwa.org) The miners made major concessions in wages and benefits in 2016, when the coal company was in financial crisis, with the understanding the cuts would be restored in five years, which has not happened. When the company offered an insulting contract this spring, the miners struck April 1. Since then Warrior Met has stonewalled negotiations, brought in scabs and used state and local police to threaten and arrest strikers and supporters. Those on the picket line have been menaced and hit in vehicular assaults.

But the strike has had an impact; the company admits that it had $7 million in strike-related losses, and coal production fell by over 40% in the second quarter of 2021. (tinyurl.com/3v6xx2m8)

The miners need your solidarity and support as they continue their long haul: Haeden Burleson @UMWAStrikePantry on Paypal.