Have British Politicians No Shame? 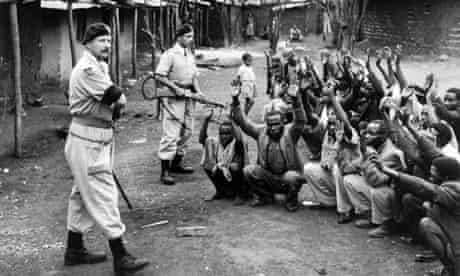 Members of the Devon Regiment round up local people in a search for Mau Mau fighters in Kenya in 1954. Photograph: Popperfoto/Popperfoto/Getty Images

The UK government is considering boycotting China’s winter Olympic Games to be held in Beijing. The British foreign office cites “international efforts to hold China to account for its human rights violations in Xinjiang.”

“It is the longstanding policy of the government that the determination of whether genocide has taken place should be made by a competent court with the jurisdiction to try such cases, rather than by the government or a non-judicial body.”

Setting aside the pathetic allegation of “human rights violations” (vastly downgraded from the absurd allegation of a genocide) in Xinjiang, Britain ought to look in the mirror and submit its own human rights abuses and genocides to the International Criminal Court or International Court of Justice. It will take many years because there are so many abuses and genocides to be tried.

How does one think that the Indigenous populations were subdued in the colonies of Australia, Aotearoa (New Zealand), Canada, the United States, the Caribbean, Africa, and Asia? Did the Indigenous peoples roll over and say please depopulate us, so you can take the land?

Did the Nepalese, Bhutanese, the peoples of the Indian subcontinent, and Sri Lanka (Ceylon) say please subdue us and rule over us?

No need to be mired too far in the past for British aggression and war crimes. There have been plenty in the 20th and 21st centuries.

Recently, the Guardian published an article, “Slaughter in Indonesia: Britain’s secret propaganda war,” that described Britain’s role in, according to the CIA, “one of the worst mass murders of the 20th century.”

Didn’t British Prime Minister Tony Blair conspire with George W Bush to fix the facts and intelligence around a policy that led to a staggering estimate that “2.4 million Iraqis have been killed since 2003 as a result of our country’s illegal invasion, with a minimum of 1.5 million and a maximum of 3.4 million” posited on the lie of Iraq having weapons-of-mass-destruction (which Britain actually has)?

It leads anyone with a slight insight into history to ask upon what moral basis do Brits claim a right to denounce other countries for alleged crimes?

Yes, there was a violent skirmish between China and India in 2020, but China has not been at war for over 40 years — a 3 weeks and 6 day war with Viet Nam in 1979. And one must not overlook the war crimes Britain committed against China. After all, Britain fought the Opium Wars to force China to open its market to opium in the mid-19th century. The Qing dynasty was weak and China lost. As penance, China had to cede Hong Kong and Kowloon to Britain and pay reparations.

Has Britain ever repaid the ill-gotten reparations along with rent for the colonization of Hong Kong?

What should one conclude about the British politicians who denounce China without irrefutable evidence? Are they dishonest charlatans or are they intellectually inept as far as their own history? George Monbiot wrote, “Deny the British empire’s crimes? No, we ignore them.”

Any human rights abuses or war crimes that China or any nation might commit must be judged, not by bombast but with solid evidence. Such evidence must be presented to a neutral tribunal, not by the scofflaws, but by reputable countries as untarnished and unbiased as possible by great crimes.

The long decline of British imperialism

The humiliation of British imperialism in Afghanistan

The Age of Chatham House and the British Roots of NATO

Contempt for migrants is being enshrined into British law