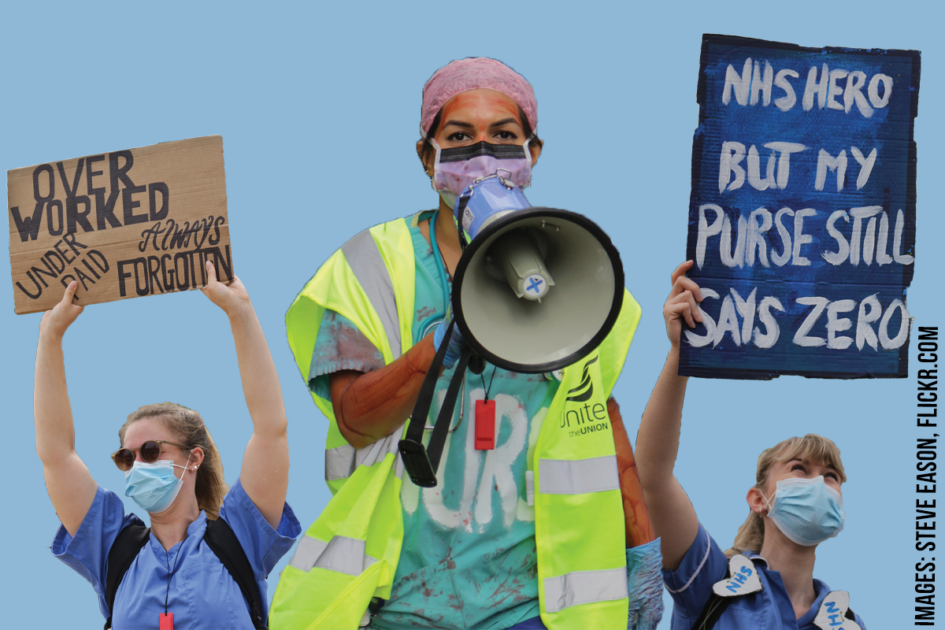 Over the last few months, following the announcement of the pathetic 3% pay offer made to healthcare workers by the government, trade unions have held their first round of consultative ballots, asking members whether to accept or reject this deal.

For the first time in decades, the prospect of a nurses’ strike in England has taken a serious step forward.

The RCN – which currently represents around 500,000 nurses – saw an overwhelming majority of those who took part in the ballot vote to reject the Tories’ offer, with 92% of respondents voting against.

Shortly after, we heard that 93% of voting members in GMB were also against the pay deal. Similarly, Unite’s result saw 90% of the union’s health members voting to reject, while 80% of Unison’s members in the NHS also voted against the government.

This paves the way for the potential of united strike action by healthcare staff across the NHS – that is, by the very workers who have fought tirelessly throughout the pandemic, with no reward in return from Tory ministers but claps and hollow words. 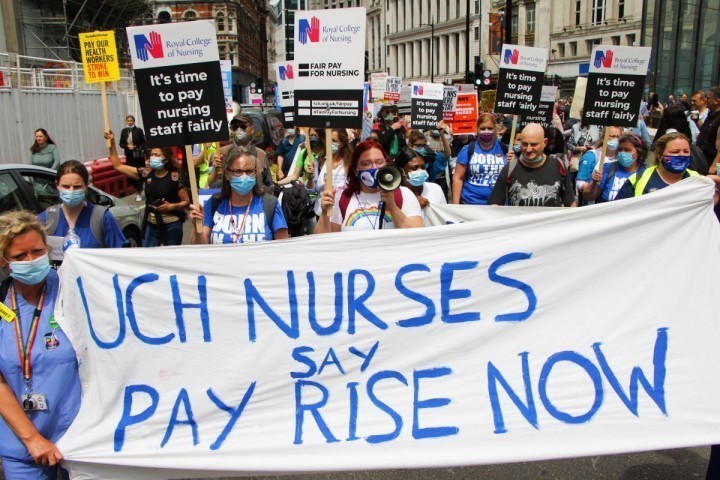 There is absolutely no respect for our health professionals from the Tories. Budget cuts; below-inflation pay offers; 170,000 staffing vacancies; long queues in A&Es; lower standards of care; privatisation of urgent care clinics, cancer treatment programmes, and community care services; traumatised staff, with hundreds dying from COVID due to a lack of PPE: all of this is not normal – and we can’t let them make us think that it is.

The current rate of inflation, as of August 2021, stands at 3%. This is predicted to rise to close to 5% by the end of the year.

Not only will this single-handedly wipe out the meagre offering made by the government, but it comes alongside a National Insurance (NI) tax hike, due to be implemented in 2022.

This NI rise will see nurses and other healthcare staff pay between £130-255 more a month. What crumbs they throw our way with one hand, in order words, will be snatched back with the other. And the Tories don’t even try to hide this from us!

In short, workers are being made to pay more in an attempt to make up for 10 years of brutal cuts to the health and social care system. This is a scandal. We say: make the bosses and billionaires pay for this crisis!

The RCN, Unite, GMB, and Unison are all now beginning to move to the indicative ballot stage. And all the unions have rightfully stated that they will work together moving forward.

Unfortunately, however, sections of the union leadership are already making excuses, even with this thumping mandate for action.

Unite’s health officials, for example, are claiming that they will only consider limited industrial action in workplaces where “feelings are strong” – ignoring those whose feelings aren’t any different, but who (for understandable reasons) may not have been reached or persuaded by the unions’ pay campaigns and ballots thus far.

It is true that each ballot saw only 20-30% of members voting. While these are higher turnouts figures than those in years previous, it is clear that more must be done. What is needed now is not excuses and pessimism, but a bold and determined campaign for a national ballot for strike action in each union, with the aim of smashing through the Tory-imposed turnout threshold.

To achieve this, the unions must prepare reps for the biggest campaign of their lives, in order to get the vote out.

As part of this, union leaders must make it clear that members aren’t voting for mere symbolic action, but for an outright fight to gain what they deserve: the full 15% pay rise that health campaigners and unions are rightly demanding.

This ultimately comes down to a question of leadership. Rank-and-file members know how bad things are in the health service; they live and experience this dire situation each and every day.

What is needed is confidence: to see that our unions – far from playing with words, as in the past – are prepared to go all the way this time in our defence.

There is certainly a hill to climb. But this makes the need for a strong lead all the more important.

With the mood that currently exists inside the health service, and with the crisis only set to get worse, there has never been a better time for a bold campaign for militant industrial action.

United in action, healthcare members in Unite, Unison, GMB, and the RCN would be more than a match for any government.

Ultimately, the struggle to defend the NHS is a struggle for socialism. But to get there, healthcare workers must feel emboldened, and given the confidence that they have the strength to fight – and win.