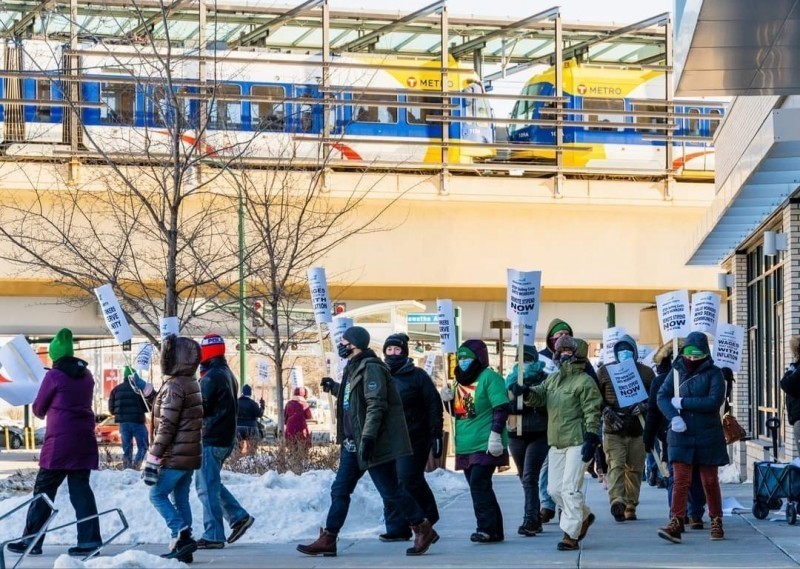 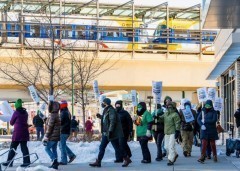 Minneapolis MN – Trails of frozen breath rose above hundreds of workers, January 19, as they chanted and picketed in subzero temperatures in front of county buildings throughout Hennepin County, the most populous county in Minnesota. The picketers are members of AFSCME Local 34 and AFSCME Local 2822 and work as library workers, social service workers and more. Earlier that morning the union members filed notice to go on strike February 2.

The AFSCME members have been in contract negotiations since spring of 2021 and are now working without a contract. They have been fighting for decent pay increases to keep up with swiftly rising costs, stipends for workers who need equipment and services to work from home in the COVID-19 pandemic, and essential pay for workers who have had to put their lives at risk working in person.

At the same time as the county has been refusing to move on the workers demands, it has also chosen this already difficult time to attack the union by proposing a takeaway in the form of a two-tier system for PTO, and a union-busting proposal to make the union pay for all the costs associated with arbitration. The county is currently sitting on record reserves as a result of federal and state money it received during the pandemic, and which has not been used for services or to help the workers.

Ali Fuhrman, the president of AFSCME Local 2822, said, “Locals 34 and 2822 bargaining teams came ready to bargain in good faith and offered reasonable compromises to the county with the intent to come to an agreement. The county blatantly refused to budge one inch and made an offer without retroactive pay that was in fact worse than their ‘last best and final offer.’”

Grace Baltich, president of AFSCME Local 34, said, “All of this is outrageous especially when we are in the midst of school closures, loss of family and friends, staffing shortages, overwhelming caseloads, and the largest COVID surge since the pandemic started.”

Vice President Jayne Mikulay of 2822, observed, “The cost of living and inflation is skyrocketing. Many of us work two or three jobs, and we have members that are on county welfare because they don’t make enough to live. The county maintains a AAA bond rating, the highest available, and has over $360 million in combined reserve funds. They can afford to offer us a real raise.”

The two AFSCME locals are set to go on strike on Wednesday, February 2. Because the workers issued a strike notice, the mediators have called the unions and the county back to one more round of negotiations in the leadup to the strike. The workers say they are prepared to fight until the demands of their workers are met.

Minnesota Workers United has issued a call on its Facebook page for a labor solidarity committee meeting to take place on January 29.

This is a developing story and Fight Back! will continue to cover it as the situation unfolds.