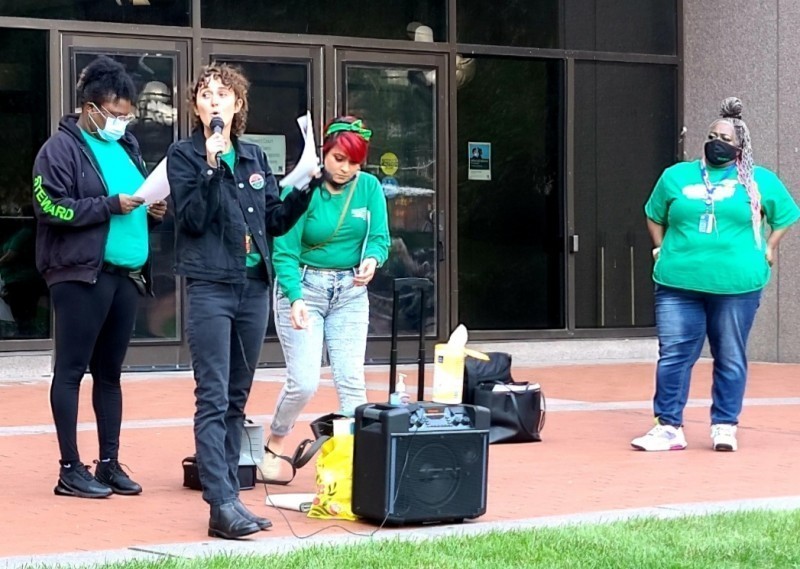 Minneapolis, MN – On Tuesday evening, September 14, around 100 union members who are part of AFSCME at Hennepin County in Minnesota rallied in front of the Hennepin County Government Center calling for real raises in this year’s contract negotiations.

Many folks from various AFSCME locals in the county spoke passionately about the need for raises and wage adjustments across multiple areas, before leading a short march around the perimeter of the building.

Some of the issues at stake for the workers: They say inflation has gone up 4%, yet many of their workers have not seen raises that keep up with that inflation or rising costs of living. They say that many of their jobs require a master’s degree level of education, yet the pay is in the lower end of the $20 range, and that most make $21 to 23 per hour. They have also seen staffing cuts, including around 400 positions so far, while the work has not decreased, so, in addition to not keeping up with rising costs, their workload has significantly increased at the same time.

The rallying workers pointed out that there is in fact not a shortage of money at the county right now. They say that Hennepin County has $199 million in their general fund, and $144 million in Health and Human Services. It has also have received $246 million in federal dollars in assistance, which it has broad discretion over what to do with.

The union members say that Hennepin County is using the COVID-19 pandemic to pass on the costs of providing services to the workers, and that it is time for real raises.

Ali Fuhrman is the president of AFSCME Local 2822, one of the locals that organized the rally, and she had the following to say, “Point-five percent won’t pay the rent! That’s why we need a 7% cost of living adjustment, a $5 increase to top pay, and 5% step increases for annual performance reviews. On top of the rising costs, many of us are doing the work previously done by two or three workers.” She went on to say, “If we let them pass the costs on to us now, if we accept our current working conditions as the new normal, it will be very difficult to fight in the future. There is no reason to be discouraged! We just need to show them that we will not accept it!”