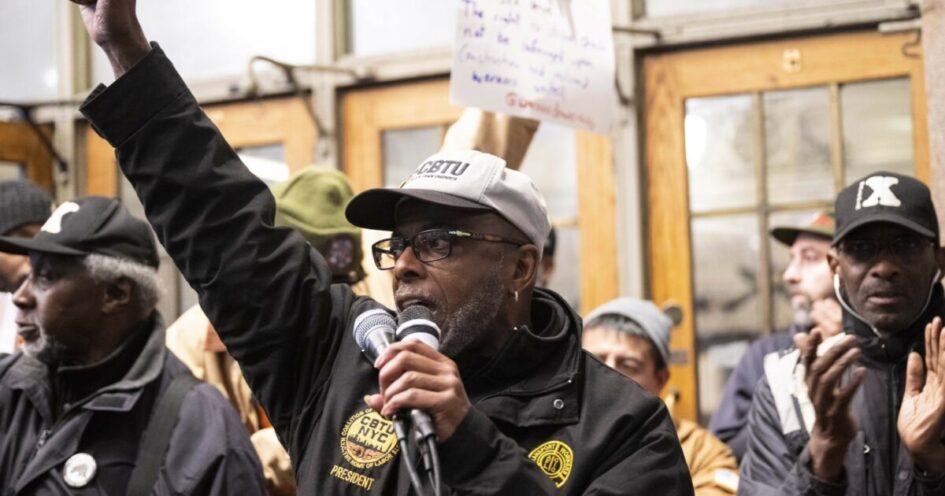 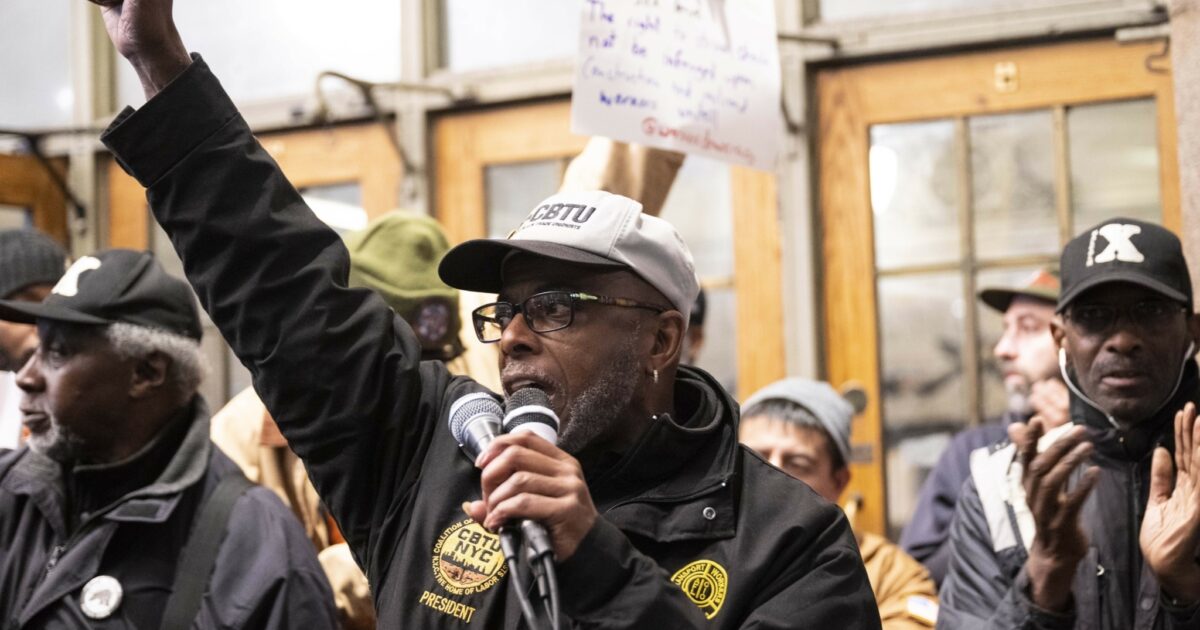 Politicians May Have Headed Off Their Strike, But Rail Workers Haven’t Stopped Organizing For Paid Sick Leave And Safe Staffing.

While the high-stakes labor dispute on U.S. freight railroads has receded from headlines since President Joe Biden and Congress imposed a new contract last month, rail workers are continuing their fight for dignity and better conditions — albeit without the threat of a national strike on the table.

“The American people should know that while this round of collective bargaining is over, the underlying issues facing the workforce and rail customers remain,” the AFL-CIO Transportation Trades Department said in a statement.

The major underlying issue remains precision scheduled railroading (PSR), the business model adopted in recent years by Class I rail carriers like Union Pacific, BNSF, Norfolk Southern and CSX. Designed to maximize shareholder profits by cutting costs to the bone, PSR has been blamed for a dramatic reduction in the freight rail workforce, increased supply-chain congestion and deteriorating safety — all while investors rake in record profits.

As a potential railroad strike loomed late last year, the absence of guaranteed paid sick leave in the rail industry came to symbolize the immense strain PSR puts on workers. Without sick leave, and with the railroads implementing draconian attendance policies to deal with understaffing, workers face discipline for missing work due to illness and have to burn through their vacation time if they or their family members get sick.

The tentative agreement between rail carriers and unions, brokered by Biden last September, did not include any guaranteed sick days — prompting a majority of the union rank and file to vote against ratifying the deal.

Late last year, when Biden called on Congress to override union democracy and impose the contract anyway, progressive Democrats attached a separate resolution mandating seven paid sick days, without the president’s public support. The measure passed in the House of Representatives, but failed in the Senate, where all but six Republicans voted against it.

“President Biden campaigned on a week of paid sick leave for all working people, and then he had the opportunity right here but didn’t take action. He favored the corporations,” said Matt Weaver, a rail worker and member of the Brotherhood of Maintenance of Way Employes Division (BMWED) in Ohio.

Immediately after the contract was imposed — effectively ending the threat of a strike — several railroad unions, including the Sheet Metal, Air, Rail and Transportation Workers-Transportation Division (SMART-TD), began urging Biden to issue an executive order guaranteeing sick leave in the rail industry.

On December 13, SMART-TD organized rallies in at least 11 states and in Washington, D.C. demanding action from Biden. At the same time, led by Sen. Bernie Sanders (I-Vt.), over 70 members of Congress signed onto a letter calling on the president to listen to the rail unions and act on paid sick leave.

So far, Biden has not publicly responded.

Deven Mantz, a BMWED member in North Dakota, was one of around 25 rail workers who traveled to Washington in November and personally persuaded lawmakers to introduce and vote for the failed sick leave measure.

“Now that we’ve got a new Congress in there, the pressure is off is a little bit, which is kind of frustrating” Mantz told In These Times. “But we’re still organizing. I’m still in contact with congressmembers that I spoke with before when I was in D.C., and they’re not giving up the fight yet quite yet.”

Mantz explained that rather than an executive order from Biden himself — which the rail carriers would likely challenge in court — guaranteed sick leave could come in the form of new safety rules from another part of the executive branch. The Department of Transportation, for example, could mandate paid sick days on the grounds that forcing employees to come to work ill and unrested creates unsafe conditions on the railroads.

Meanwhile, rank-and-file railroaders are also focused on longer-term struggles, with the next round of contract negotiations scheduled to begin in less than two years.

Angry at top union officials for working closely with the Biden administration to secure an unpopular agreement and avoid a strike, many railroad workers are also calling for more democracy in their unions.

Just days after the new contract was imposed last month, members of the Brotherhood of Locomotive Engineers and Trainmen (BLET) — the second-largest rail union — voted their union president, Dennis Pierce, out of office in a stunning upset.

The BLET’s new president, Eddie Hall, took office on January 1. A working engineer and local union officer in Arizona, Hall’s longshot candidacy was born out of rank-and-file frustration at how the union’s leadership was handling contract negotiations. His unexpected victory shows how deep those frustrations go.

The rank and file in the BMWED are also mobilizing, particularly through a caucus called Rank and File United, cofounded by Mantz in 2021.

“The focus of our caucus is to educate. We’re trying to give membership power and confidence local by local,” Mantz explained. He said one of the ultimate goals of Rank and File United is to organize a work-to-rule campaign at some point in the future.

“A work-to-rule campaign would push all of our membership to do exactly what they’re supposed to do [on the job], no cutting corners. The railroads almost entice you to cut corners on safety issues because it benefits them,” Mantz said. “Our idea is this would force the railroads to actually hire” instead of overworking the dwindling number of existing employees.

Rank-and-file railroad unionists seem to agree that the best hope for a better contract next time is greater cross-craft unity, and a single bargaining coalition of all the rail unions.

Building such unity is the main goal of Railroad Workers United (RWU), a solidarity caucus of rank-and-file workers from across the dozen different rail unions. Founded in 2008, RWU gained national attention in the recent contract fight as its members organized against the Biden-brokered deal and advocated for the unions to strike.

RWU organizer Ron Kaminkow said that while the group would like to see Biden mandate paid sick days, they are not going to expend their limited resources trying to persuade the president to do what he could have done during contract bargaining.

“It has the potential to make us some sort of lobby group, and that’s not really what we do,” Kaminkow said, explaining that RWU has traditionally been successful at pressuring officials from the different rail unions to work together on issues like preserving two-person train crews. “I think Railroad Workers United has bigger fish to fry and a more important direction to go in.”

In particular, he said RWU is going to “go notch 8” on its recently announced campaign calling for public ownership of the freight railroads. (Notch 8 is the highest amperage on diesel locomotive engines.)

“The railroad in this country is an anomaly in that it is the only transportation infrastructure that’s privately held, and it’s an anomaly worldwide in that most all railroad infrastructure everywhere else is held publicly,” Kaminkow said, noting how highways, airports, seaports and inland water ways in the United States are already publicly owned.

RWU contends that as long as the railroads are owned by private corporations, they will continue to put profit maximization ahead of safety and efficient transportation.

In the weeks since Biden and Congress prevented a rail strike in the name of avoiding supply chain disruptions, there have nevertheless been multiple disruptions brought on by the rail carriers’ PSR business model.

For example, in late December, Union Pacific failed to deliver multiple shipments of corn to Foster Farms facilities in California, putting thousands of dairy cows and millions of chickens at risk of starving. There have also been several freight derailments around the country, including one that caused an Amtrak passenger train to be stranded for 29 hours.

Meanwhile, the growing length of freight trains and increased time they block rail crossings — another symptom of PSR — has been blamed for a growing number of deaths as they delay emergency responders like paramedics and firefighters from quickly getting to where they need to be.

“The Class I railroads have pissed off everyone in the country,” said Kaminkow. “RWU will be seeking allies amongst trade unions, passenger train advocates, environmental groups, social justice and transportation justice groups, and so forth in the months and years ahead.”

Ahead of the next round of contract negotiations, workers are hoping that the coalition building they’ve done over the previous year will help build pressure to secure key wins. Yet they also worry about the precedent set by Biden and Congress last month.

“With the [recent] agreement imposed on us, it gives the railroads no reason to bargain in good faith,” BMWED’s Weaver said. “Why would they make a fair agreement with us when they know Congress will just shove anything up our asses?”

Why Workers Are Up in Arms Over the Rail Strike Intervention