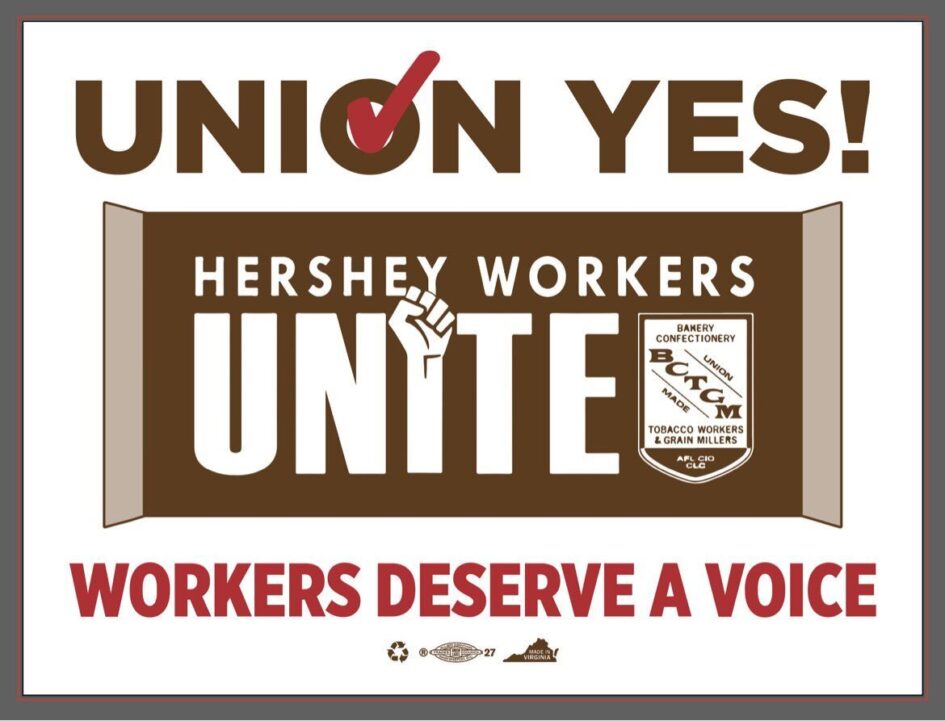 Workers at a Hershey candy manufacturing plant in Stuarts Draft, Virginia are now voting in an election to unionize and join the Bakery, Confectionery, Tobacco Workers and Grain Millers’ International Union, with the results to be counted on March 24. The union organizing drive began in September of 2021.

Workers at the factory endure grueling and brutal conditions, including having to work up to 70-plus days straight, constant forced overtime, punishment for time off, and a two-tiered system in which newer employees are paid less than previous groups of employees. In a video on the unionization efforts produced by More Perfect Union, the workers refer to going to work as a stay in “Hershey’s prison.” The drive for unionization is being led by longtime workers nearing retirement, in an effort to make sure that incoming workers receive the same pay, benefits, and working conditions they had when they began at the factory.

Alongside these conditions, workers have also cited reduced breaks and overtime pay cuts as motivation for organizing. In 2020, Hershey reported revenue of just less than $8.5 billion, which was up from $7.99 billion. Also in 2020, Hershey CEO Michele Buck made over $19 million, which is roughly 630 times the median salary of a Hershey worker. In 2021, the company had a record year of production, and brought in profits of over $1.47 billion.

Hershey has attempted to coerce workers into voting against unionizing, and has hired the union-busting Labor Relations Institute. The LRI has since proceeded to create an anti-union website, make “union-free” lawn signs to distribute throughout the community, and conduct captive audience meetings with workers ahead of the election. Hershey CEO Michele Buck has gone on record saying that the company believes “…it’s all about the well-being of our employees.” But as the conditions at the Stuarts Draft plant shows, the company’s executives in fact do not care one bit about the wellness of workers. John Price, BCTGM Organizing Director, has said that at this point there will probably be 12 unfair labor practice charges brought forward by BCTGM to the National Labor Relations Board.

Even with the obstacles created by Hershey’s anti-union campaign leading up to the election, workers remain optimistic about their unionization effort. One worker, James Gibson, told his fellow co-workers at the plant, “…hang tough. We’re going to make a difference.”