Charges of “antisemitism” have been degraded to the point where they often sound like a 6-year-old telling other kids not to play with Johnnie because he has cooties.

The reason for the vitriol? Two months ago, I embarrassed Painter on Twitter after he slammed Jagmeet Singh for taking action on Palestine. In “Curious case of NDP exec attacking party leader on Palestine” I also detailed Painter’s bizarre shift from referring to Israel as an apartheid state to disparaging those, including Amnesty International and Human Rights Watch, who point out the obvious institutional oppression of Palestinians.

Painter’s smear was a response to my challenging Noah Tepperman for criticizing Toronto Star columnist Shree Paradkar after she wrote critically about the International Holocaust Remembrance Alliance’s anti-Palestinian definition of antisemitism. In response to Paradkar posting “Why the definition of antisemitism has become such a polarizing issue”, Tepperman wrote, “As a progressive I’m constantly shocked by the near-total acceptance of antisemitism in progressive dialogue, and the lack of self-awareness that enables it. In the face of rising violent and non-violent antisemitism, your argument amounts to little more than ‘all lives matter’.”

In response I wrote, “Progressives don’t sit on the board of explicitly racist groups as you do Noah. The Jewish National Fund operates a form of legalized racism Canadian courts outlawed 7 decades ago but you are ok with it so long as it’s Jews that benefit. Your anti Palestinian racism is disgusting.” Among the highest profile anti-Palestinian activists in the NDP, Tepperman has long sat on the board of the Windsor branch of the JNF, which excludes non-Jews from its vast landholdings in Israel.

Imagine calling yourself progressive and sitting on the board of an organization practicing a form of overt, legalistic, racism? And then having the chutzpah to complain about discrimination!

In the latest instance of the apartheid lobby claiming discrimination, CIJA attacked socialist Ontario MPP Joel Harden for “spreading what can only be called antisemitism and misinformation about Israel.” While there was nothing anti-Jewish in the interview between Harden and Peter Larson of Canada Talks Israel/Palestine, the Ontario NDP pressured him to apologize. To no one’s surprise CIJA and other Israel lobby groups immediately upped the ante by demanding Harden be expelled from the party’s caucus.

While the media and a disturbing number of ‘progressives’ blindly follow the apartheid lobby, CIJA’s double standards are flagrant. The well-staffed and financed group twisted a 30-minute long, nuanced, discussion into suggesting Harden blamed all Jews for Israel’s violence. While claiming a leftist had done a very bad thing by conflating Jews with Israel — even though Harden did not actually do that — CIJA regularly conflates Jews with Israel.

In fact, their name was partly chosen to blur that distinction. A decade ago, the Tanenbaums, Schwartz/Reisman and other wealthy hard-line apartheid promoters created CIJA to replace the Canadian Jewish Congress and Canada Israel Committee. They removed Canada from the name but left Israel in it.

As CIJA bemoaned Harden’s purported conflation of Jews with Israel CIJA associate director of partnerships Sheba Birhanu forcefully equated Jews and Zionism in “Jewish voices aren’t heard when we call out hate”. In Tuesday’s Globe and Mail she wrote “to deny Israel is to deny Jewish identity. Most Canadian Jews have an attachment to Israel. They are Zionists. Those who deny this component of Jewish identity exclude Jews from spaces that purport to seek justice. In rejecting Zionists, they reject Canadian Jews.”

In a bitter irony, there’s a correlation between Jewish activists who conflate Jews with Israel and those who cry antisemitism when someone associated with Palestine solidarity does so. A particularly striking example is disgraced former Green party adviser Noah Zatsman. He complained bitterly about Harden’s purported “trope” while repeatedly tweeting “All JEWS are Zionists”. He even does so in the same short message. In a tweet attacking Avi Lewis for defending Harden, Zatsman complained, “This is so disturbing. Has his Twitter been hacked? Avi Lewis begging you to please stop being this outlier for no reason in the face of a terrible antisemitic trope. ALL Jews are zionists.” The cognitive dissonance is remarkable.

The antisemitism charge is not simply a way to enable Palestinian oppression and protect a war-mongering settler colonial outpost, it’s a cudgel for the establishment to destroy the political forces that offer a glimmer of hope for overcoming the existential crises befalling humanity. The attack on Harden, an eco-socialist ‘movement’ politician, highlights that.

In Britain left-wing Labour party leader Jeremy Corbyn was demonized as a supporter of dictators, terrorist sympathizer, anti-English, etc., but the anti-Jewish slander stuck since Corbyn and some supporters bent to the defamation. That’s precisely what Harden and the Ontario NDP has just done. If leftists don’t come out swinging on these cynical smears the attacks will continue to destroy movements that offer the prospect of a better future. 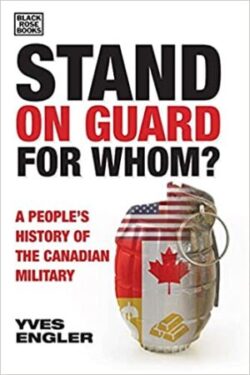 Hey, Hey, USA! How Many Bombs Did You Drop Today?

Book Review – A Land with a People: Palestinians and Jews Confront Zionism

Why is Israel Amending Its Open-Fire Policy: Three Possible Answers