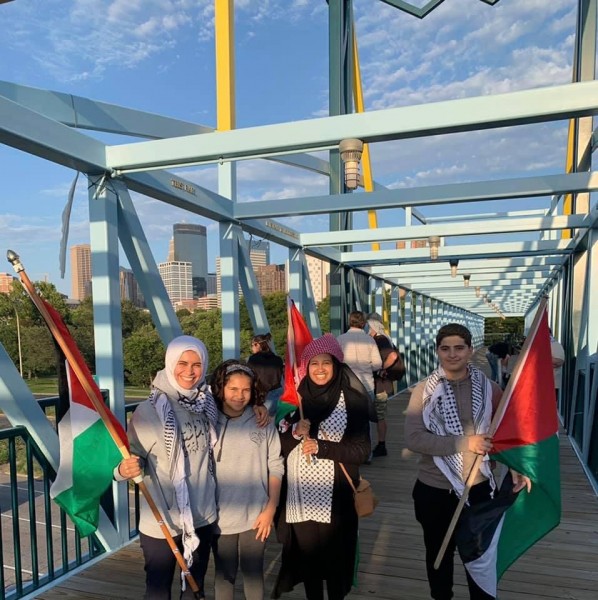 (Photo by American Muslims for Palestine)

Minneapolis, MN – On September 16, thousands of rush-hour commuters on Interstate 94 saw banners with slogans like “Free Palestine,” “End apartheid” and “End ethnic cleansing” hung from the Loring Park footbridge, amid a sea of Palestinian flags. Activists from American Muslims for Palestine – Minnesota (AMP-MN), the Anti-War Committee (AWC) and Women Against Military Madness (WAMM) then rallied in the park with chants and speeches.

The occasion was the anniversary of the 1982 Sabra and Shatila Massacre in Lebanon, when an invading Israeli army encouraged local right-wing militias to murder thousands of Palestinian refugees and Lebanese Muslims over two nights. Activists highlighted the situation of Palestinian refugees in the present, whose right of return to Palestine continues to be denied by the Zionist occupation.

The activists also called attention to Israel’s settler-colonial policies that are creating new refugees. In May, ethnic cleansing of Palestinians in east Jerusalem’s Sheikh Jarrah neighborhood sparked an unprecedented wave of protest around the world. The Civic Coalition for Palestinian Rights in Jerusalem has called for international pressure to stop Israel from expanding the so-called “evictions” and the land registration procedures it uses as a pretext to take Palestinian lands and homes. Israeli officials have stated they plan to implement the policy of title and registration in all of east Jerusalem, which would pave the way for citywide ethnic cleansing.

“After the world witnessed the human rights violations committed by Israeli forces in the Sheikh Jarrah neighborhood, it is imperative that we keep that momentum going until all of Palestine is free – from the river to the sea,” Andrew Josefchak of the AWC told the rally.

This year’s Sabra and Shatila anniversary came on the heels of a dramatic prison break from Israel’s notorious Gilboa prison. On September 6, six Palestinian revolutionaries escaped through a tunnel they painstakingly dug using only their prison cookware. Although four were recaptured in the following days, the escape galvanized resistance across Palestine, with the spoon emerging as a new symbol of Palestinian liberation.

“The joy and the excitement that it brought to Palestinians and supporters of Palestine everywhere cannot be described. How can Israel destroy a people that dig tunnels with spoons?” asked Mariam El-Khatib of AMP-MN. “They brought humiliation to one of the strongest armies in the world.”

Sarah Martin of WAMM called for an end to US aid to Israel. “The massacre at Sabra and Shatila was a direct consequence of the impunity given to Israel by the U.S. and the international community. The U.S. aids and abets Israel, as administration after administration continue to give unconditional political support to Israel and at least $3.8 billion per year in aid, mostly used for weapons against Palestinians.”