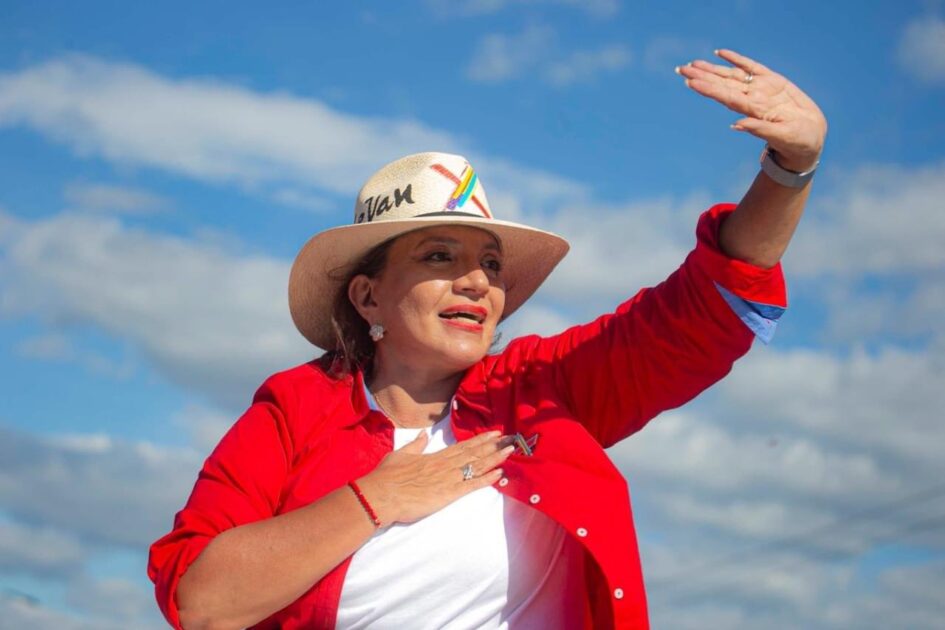 Xiomara Castro, candidate of the Libre party (Freedom and Refoundation Party), the main force in the opposition coalition, has won the elections in Honduras. The regime established by the 2009 coup has been overthrown. With 40 percent of the votes tallied, Xiomara is ahead with 53.61 percent against 33.87 percent for Nasry Afura (nickname ‘Papi a la orden’ – ‘Daddy of law and order’) of the National Party, the candidate representing the continuity of the coup.

Read the original in Spanish here |

There is an atmosphere of tremendous joy among the people who are now thinking to themselves, ‘They are leaving!’ This election result brings with it enormous hope for change. After the Liberal and National Party united to overthrow former president Mel Zelaya through a clumsily-executed coup in 2009, the former are now in the process of dissolution and will obtain around 9 percent of the votes. In fact, one section of the Liberal Party actually openly voted for Xiomara.

The National Party ended up governing in the wake of the coup, doing so by way of ridiculous and blatantly fraudulent electoral processes. Today, they are completely discredited. It was brute force alone that kept an increasingly degenerate oligarchy in power. As well as being utterly corrupt, in those years the upper echelons of the state strengthened its ties with organised crime, effectively creating a narco-state. Again, electoral fraud was in operation, but this time it was blocked by the active and genuinely mass mobilisation of the people. The campaign of fear continued, as did the campaign of misinformation in the mainstream media and on social media. Voter abstention was encouraged. The media claimed that Xiomara was going to kill children because she was pro-abortion, when what she had actually proposed was the decriminalisation and legalisation of pills that prevent conception.

The media warned that with Xiomara comes communism, which – according to the classic patriotic discourse of the extreme right in Central America – means chaos, death and authoritarianism. If already by 2017 the methods of the Honduran right were ineffective, now they were less than obsolete. In 2017, they were able to impose fraudulent election results through state repression thanks to the hesitation of the left-wing leaders. Had they tried that again today, they would have provoked a revolutionary response from the masses, and the oligarchy would have run the risk of losing everything.

The decisive factor: the action of the masses

The opposition alliance promoted the importance of voting from the beginning of their campaign and indeed there was a huge turnout during the first minutes and hours. The voting ended at 5pm, but in places where people were waiting in line voting hours had to be extended until the last ones finished voting. The lines after 5pm were huge. There were attempts to close the polling stations early, but acts of popular pressure prevented this.

Under pressure from the opposition to the coup plotters, in the wake of the fraud in 2017, a national electoral council was established and mechanisms were established to make voting more transparent – the national identification card was removed and electronic verification methods were applied during the election. In Honduras, even the dead cast votes, and the living often vote more than once! These new measures reduced the scope of the cheating Nationalists. 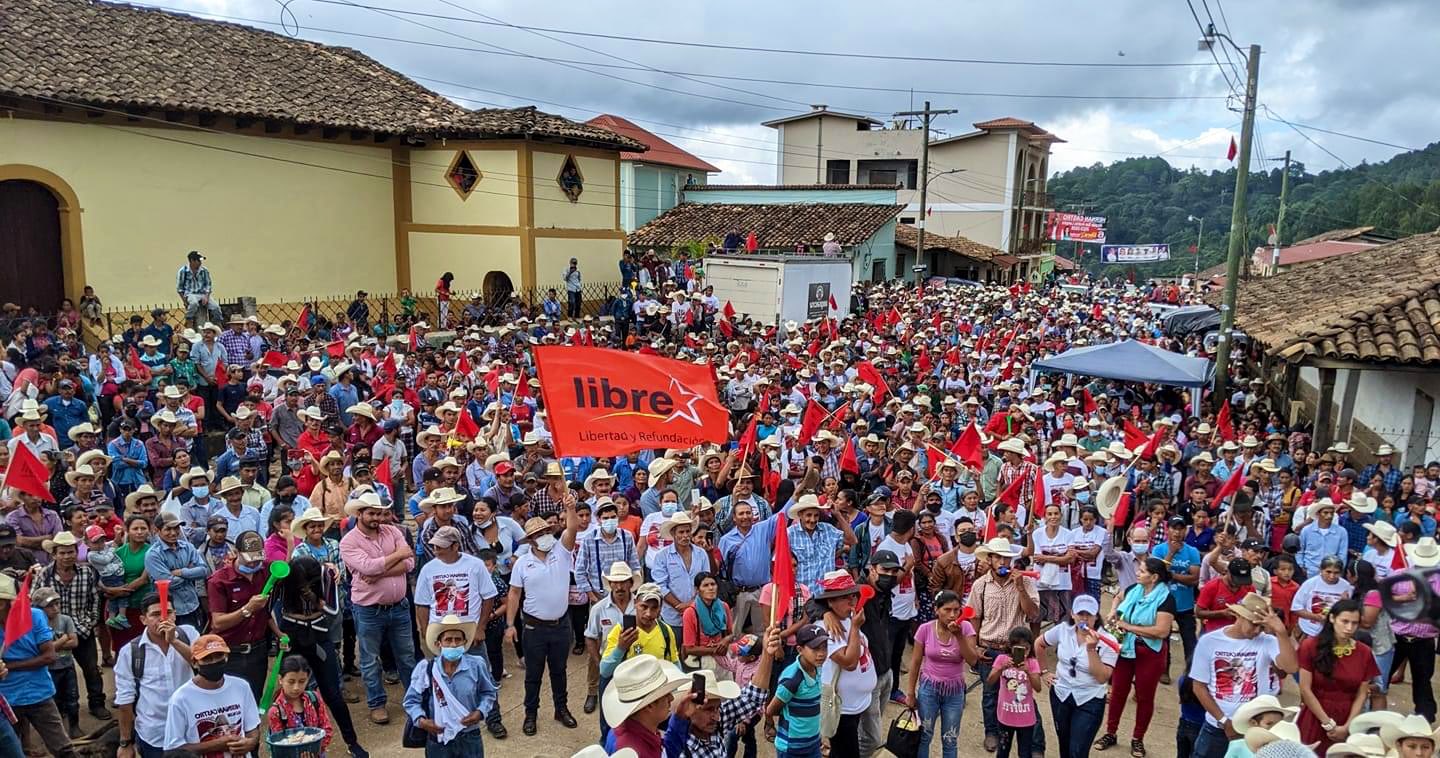 The decisive factor in this election was the action of the masses / Image: Partido Libre, Twitter

The National Electoral Council (CNE) has worked under conditions of permanent boycott and continues to suffer from many problems in its operations. The elections were by no means perfect, and the Nationalists didn’t cease their underhand methods. Packages were delivered already opened, and voting equipment (cables, ink, etc.) arrived incomplete. This was part of a clear boycott of the CNE which would result in fraud. This was no celebration of ‘democracy’. Rather, the massive participation of the masses in the elections and the discrediting of the regime and the National Party disrupted any possibility of fraud.

The National Party: destined for the dustbin of history

The cynicism of the Nationalists has no limits. David Chávez, the National Party candidate for the central district, declared at 8:22 am – when the polls were just opening – that he and his party had already won the election. When he went to vote, the people shouted insults at him, called him a drug addict and a narco, until their voices united into chants of, “Get out JOH!” referring to Juan Orlando Hernández (JOH), the current president. For the oligarchy, the elections are a necessary nuisance in which they call upon the masses to vote to decide who will govern over them. But today they were disarmed in the face of the action of the working masses, who took history into their own hands.

It was the masses who defended the vote. The people gathered around the vote counting to ensure that the elections were not stolen once more. 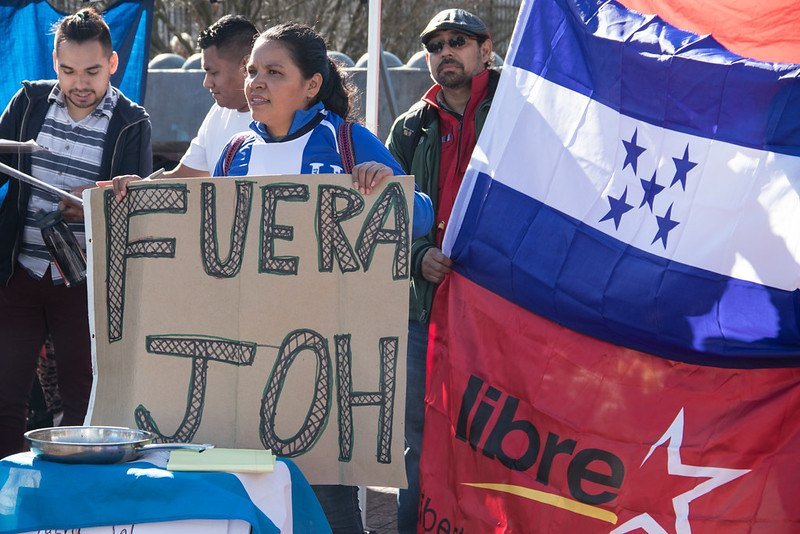 It was the masses who defended the vote. The people gathered around the vote counting to ensure that the elections were not stolen once more / Image: Peg Hunter, Flickr

The Nationalists, who had declared themselves the winners twice during the day, finally fell silent. In its first statement of the night, the CNE indicated the clear trend: Xiomara was winning. The masses took to the streets to celebrate and the National Party’s electoral bunker was left empty.

The resounding electoral victory of Xiomara Castro and Libre is clearly irreversible, although it has not yet been officially declared as the counting continues. These elections are a turning point in the history of Honduras. It is the first time that a left-wing party has won a national election. The old bipartisan regime of the Nationals and Liberals (the Honduran version of Republicans and Democrats), received its death blow. Its apparatuses refused to die, but that regime has been consigned to the dustbin of history. But the organic crisis of capitalism in Honduras requires more than the collapse of a regime. It requires a radical change of the system.

Today there is enormous joy in Honduras. Who can deny the Honduran people their joy in having defeated the coup plotters as they take to the streets and celebrate? People dressed in red shout “¡Hasta la victoria siempre!” [“Until victory, always!”, a phrase made famous by Che Guevara] Ordinary people – the true protagonists of this victory – told UNE TV: “My country has a heart again.” “We have liberated the country from this drug trafficking, we are free. They are leaving, they have left!”

The workers vote for change

Xiomara is set to win in 17 out of 18 departments – in El Paraíso, Nasry Asfura [National Party presidential candidate] leads by just over 2%. Xiomara will now become the first female president in the country’s history. In the capital, Libre won. In the central district, Xiomara obtained 52.19% of the vote compared to 38.26% for Nasry Asfura.

In Cortés, Xiomara got more than 63% of the votes and Nasry 21.44%. Located in this department is the important industrial city of San Pedro Sula (which will be governed by Libre) and Choloma, the municipality in which the largest number of workers live. Here, an even greater victory was scored – Nasry Asfura took just over 15% compared to 75% for Xiomara Castro. The workers’ vote leaned clearly in favour of Libre.

No concessions to the oligarchy and imperialism!

The Honduran and Central American right campaigned for a vote against Xiomara Castro saying that with her came communism. It is significant that this campaign failed to discourage the masses from voting. This reflects the fact that the people aspire for radical change. This must now be carried out.

Xiomara is set to win in 17 out of 18 departments / Image: Partido, Libre Twitter

Xiomara held a rally in the evening in which she said, “We are going to form a reconciliation government in our country. A government of peace and a government of justice. We are going to initiate a process throughout Honduras to guarantee a participatory democracy and direct democracy”. She also added: “I will call for a dialogue with all sectors of Honduran society, starting tomorrow, so that we can use points of agreement and, for this, form the minimum basis for the next government.”

In a tweet, Xiomara thanked the business chamber of commerce: “Thank you CCIT (chamber of industry and commerce in Tegucigalpa), we are going to work hand in hand with the private sector to improve the investment climate in order to create jobs.” To which the CCIT responded by congratulating Xiomara saying that they would work hand in hand “in favour of free enterprise and the Honduran people.”

The Honduran people voted for a radical change and as such no concession should be given to the oligarchy, businessmen and imperialists. Xiomara must be consistent and carry out her programme: give rights to women, improve the quality of life of Hondurans, and nationalise the companies and services that were privatised.

It was the people who scored this victory. It is the organised workers, peasants, the unemployed, students and women fighting against oppression, on a class basis, who must complete the task of rebuilding Honduras by making it a country where there is justice for the exploited.

Honduras is a poor country suffering from the permanent harassment of imperialism. When they tried to defend their sovereignty, the oligarchs staged a coup, backed by imperialism. The past 12 years have been a dark period. In that time, however, the Honduran people acquired rich experiences and lessons through revolutionary struggle. Today, with the opening of democracy, there will be many illusions. But this can also bring encouragement, advancing the mass organisations of workers, women and youth.

A significant factor in this election was the presence of many young people: those who were children when the coup took place. This is a fresh and dynamic new generation that wants a different society. The only way to achieve this is by relying on the revolutionary organisation of the masses and attacking the privileges of the oligarchy and the imperialists to the benefit of the people. Xiomara will come under pressure from classes with conflicting interests. The organisation of the working class is necessary, defending a programme based on the clear defence of our class interests. It is necessary to build a clearly socialist and internationalist tendency within Libre, the unions, the youth movement and the women’s movement. We invite you to build it – join Izquierda Marxista.