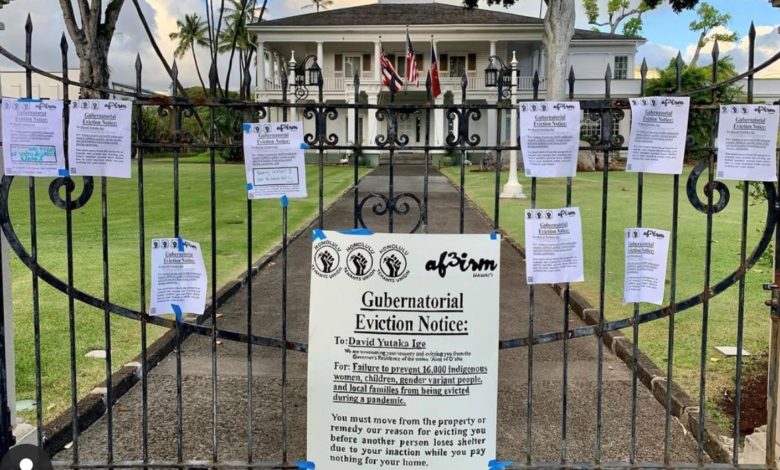 As a mounting eviction crisis looms, placing more than 11 million people across the United States at risk of eviction and homelessness, tenants in Honolulu assembled at the Governor’s Mansion to speak out and symbolically evict Governor David Ige. The event, co-hosted by Af3irm and the Honolulu Tenants Union, called for an extension of the state eviction moratorium, drawing attention to the violence enacted by the illegal occupying state forces upon the Kānaka Maoli (Native Hawaiians), as well as the more general violence enacted against all poor, working and oppressed people living in Hawaii and around the world.

The war on Black and Pasifika peoples takes many forms on Oʻahu. This is exhibited plainly by the lack of meaningful support by the state to the Hawaiian Home Lands program, which is the capitalist gesture towards reparations for the Hawaiian people. Yet tens of thousands of Hawaiians are mercilessly left stalling on waitlists with no recourse to the vast expanses of unused and misused land “owned” by the imperialist state. Recently, a bill was passed in the state legislature that extended $1 leases for military use of lands sacred to Native Hawaiians — $1 for 65 years — posing environmental as well as cultural and especially economic threats to the survival of the Kānaka.

Anuhea Kanealii, a member of Af3irm, stated on behalf of the organization, “I’m tired. Tired of seeing my people displaced. Tired of seeing my friends moving away. Tired of my ʻohana, my family moving away — because we can’t afford to live in our own homes!” Every day, Hawaiians are priced out of their homeland by colonial landlords while the Army squats for less than two cents a year on sacred land. At all points of contact, Hawaiians have demonstrated fervent and principled opposition to the oppression of the colonial apparatus.

Alex Balgos, another Af3irm member, argued for a renewed moratorium: “We can’t risk tripling the homeless crisis! We also can’t jail away the homelessness crisis!”

According to the Hawaii State Department of Health, Native Hawaiians and Pacific Islanders are overrepresented in the homeless population at a rate of more than twice that of their occurrence in the wider population. The state is not only enacting violence through dispossession of Native peoples, but with repression, as the mayor’s office enacts weekly sweeps and refuses to acknowledge they are even targeting Hawaiʻi’s homeless. In a recent interview, Anton Krucky, the director of the cityʻs Office of Housing and Homelessness, was quoted in Civil Beat as saying: “Our administration does not see this as a homeless strategy, but rather as disposal of the debris, trash and bulky items left on the sidewalks, streets and parks.” He then went on to remark that an unfortunate side effect is that homeless people are “affected” by this violent, targeted state repression.

Repression also takes the form of the shocking, direct physical violence exhibited by police forces across the country, as seen in the recent back-to-back killings of Lindani Myeni and Iremamber Sykap in Honolulu earlier this summer. Lindani Myeni was an unarmed Black man from South Africa who walked into what he thought was a temple, only to be met with the outsized, panicked confusion of a tourist residing in the building. As reported in the Honolulu Star-Advertiser, when the police arrived, they neglected to identify themselves in a dark and chaotic situation before shooting the unarmed man.

Iremamber Sykap, known by his nickname “Baby,” was also attacked by police, brutally hit eight times by rounds in the back and back of his head, after a high-speed car chase. According to NPR, police testified that they found a pellet gun in Sykap’s car, but just as with Myeni, no real firearms were present on the scene except those wielded by the cops. Sykap was 16 years old and Micronesian — a largely immigrant community which faces remarkable racism and disparities in Hawaiʻi.

PSL member Sorcha McCarrey brought up the connections she observed in her recent experiences as a homeless transgender woman who went through the shelter system due to expiration of the state eviction moratorium, and the relationship of the shelter system to police repression at the speak-out:

The first person I met at the shelter became my housing coordinator. The day I met her and every day I met with her, she was wearing a ‘blue lives matter’ t-shirt. The first and only time she discussed housing with me she told me my situation was quote, ‘not that bad.’ I was homeless while trans. I left the shelter soon after that. The next week I protested against police brutality at the courthouse, for Justice for Iremamber Sykap, and I say his name here, Justice for Baby! I led chants on the bullhorn while people wearing the very same blue lives matter regalia as my housing coordinator harassed me with transphobic slurs from across the street. Is it any wonder I did not trust the shelter?

The punishment of poor, working and oppressed people at the hands of the state is far-reaching and immediate. One activist with the Honolulu Tenants Union told of how his landlord refused to fix his leaky roof for months, which then flooded the house when a storm hit. “The landlords — they threw us out! They threatened to call the police on us, change the locks on us, they threatened to throw our property away, all while we were reeling from the emergency, going from hotel room to hotel room… In this system we are only as good as our labor… But we are far more important than the labor that is exacted from us!”

Balgos from Af3irm wrapped up the event by drawing together the heart of the calls for an extension to the moratorium as well as the cancellation of rents and mortgages in Hawaiʻi: “We strive for a world that recognizes that housing is a necessity that shouldn’t be denied anyone — especially on stolen land! … No one should go unhoused during a global pandemic!”