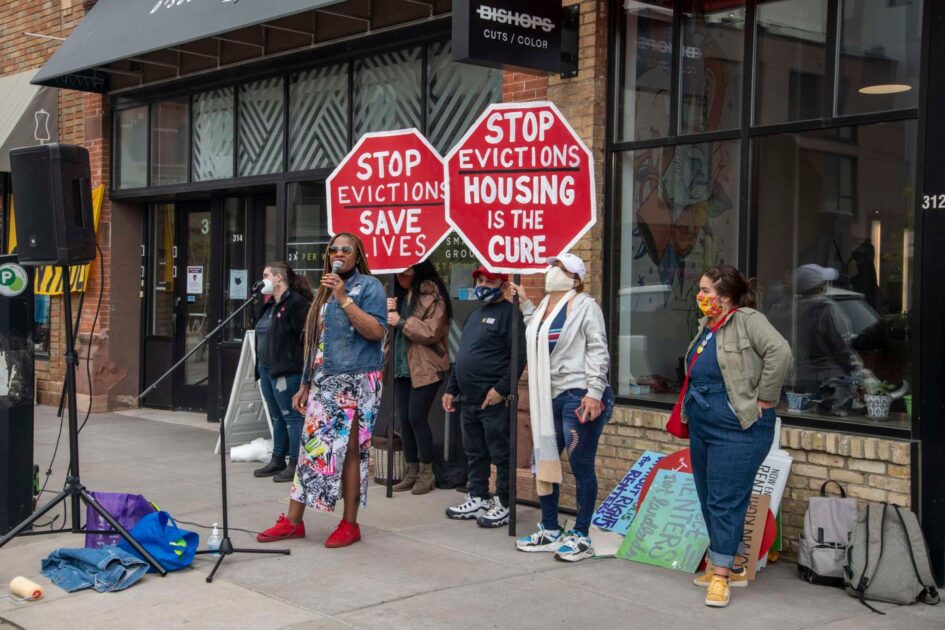 The COVID-19 pandemic, which forced millions onto unemployment rolls and drastically reduced family incomes, has exacerbated an existing housing crisis. The U.S. Supreme Court made matters worse Aug. 26, when it ruled against the federal eviction moratorium which the Centers for Disease Control and Prevention (CDC) had issued. This vote eliminated eviction protections for millions of households, predominantly Black and Latinx. Rally to stop housing evictions during the pandemic in Minneapolis, May 8, 2021.

During the pandemic, the federal eviction moratorium, extended federal unemployment benefits and other federal, state and local programs have pumped close to $5 trillion into the U.S. economy. Many families were safely housed, and about one-third of renters were able to pay rent.

However, the vast majority had to borrow money or turn to savings to pay rents. By early 2021, some 7 million tenants were behind on rent. According to a report issued in June 2021 by Harvard’s Joint Center for Housing Studies, these tenants are unlikely to recover without more government support.

Part of the problem was the bureaucratic way many of these capitalist government “intervention” programs were carried out. In Pennsylvania, for example, to receive rental assistance applicants had to go through a prolonged five-stage process. Tens of thousands of tenants were still waiting for assistance when the program ended in late summer.

There were no mandates that landlords accept delayed rent payments, and many refused to allow delays. By June 2021, Pennsylvania had paid out only $133 million to tenants. This is 17% of the $870 million it had been allocated by the federal program. It is unlikely that most of the remaining funds will ever go to the families most in need.

These government economic intervention programs were essentially life supports to prop up the U.S. capitalist economy. The CDC moratorium was a stopgap measure. This moratorium did little to address a growing crisis in housing affordability that had been in play long before the COVID-19 pandemic. Fueled by gentrification, ever-widening income inequality, historic racist housing policies and a chronic housing shortage, houselessness was a pre-COVID epidemic.

The crisis was in the works decades before the coronavirus emerged in late 2019. According to the Center on Budget and Policy Priorities, between 2001 and 2019, increases in median rents outpaced increases in renters’ incomes in nearly every U.S. state. By 2019 in over 90% of U.S. counties, minimum-wage workers could no longer afford a one-bedroom apartment. One in four rental households paid more than half their pretax income for rent.

The roots of this crisis go back even further. Starting in the 1970s, restrictive federal housing policies stopped the expansion of public housing while cutting rental assistance programs. Income tax provisions allowed homeowners to deduct mortgage interest and property tax costs. Landlords pay these same taxes and pass down the expense to their renters. No similar tax deductions were offered to renters.

In addition, racially driven regulations to entrench segregation limited what housing could be built and Black and Latinx workers’ access to this housing.

Before the pandemic, the global capitalist economy was already slowing down, driven by overproduction and capitalism’s irreversible systemic crisis. The COVID-19 pandemic led capitalist countries around the world to pump trillions of dollars into propping up their economies. Yet they have not been able to stave off new social and economic crises in the making, of which the housing crisis is the canary in the coal mine.

The millions in the U.S. who face the risk of homelessness this fall and winter have ample company. Around the world, in major cities from New York to London, Berlin, Paris, Rome and others, soaring property prices and increasing rents are creating an acute global housing equality crisis. It includes a widening generational gap, as younger workers can no longer afford apartments.

Housing inequality, sure to become a trigger of social unrest, is already resulting in political crises in several countries, including Sweden, South Korea, Canada, Australia, Ireland and Singapore. Reactions to some efforts to abandon traditional rent controls and let the market set rates have brought governments down.

In an attempt to address this crisis, Argentina’s government decreed a pandemic rent freeze, bypassing landlords by having their central bank create an index to determine how much rent could go up. This year China increased restrictions on the real-estate sector and may implement a property tax to decrease prices.

As with the global climate catastrophe, any sustainable solution to the housing crisis demands a systemic global economic change. For guaranteed housing and the survival of humans, workers and the oppressed across the globe must take down capitalism and replace it with a socialist system based on the premise that housing is a human right.