How Afro-Colombians are Fighting White Feminism 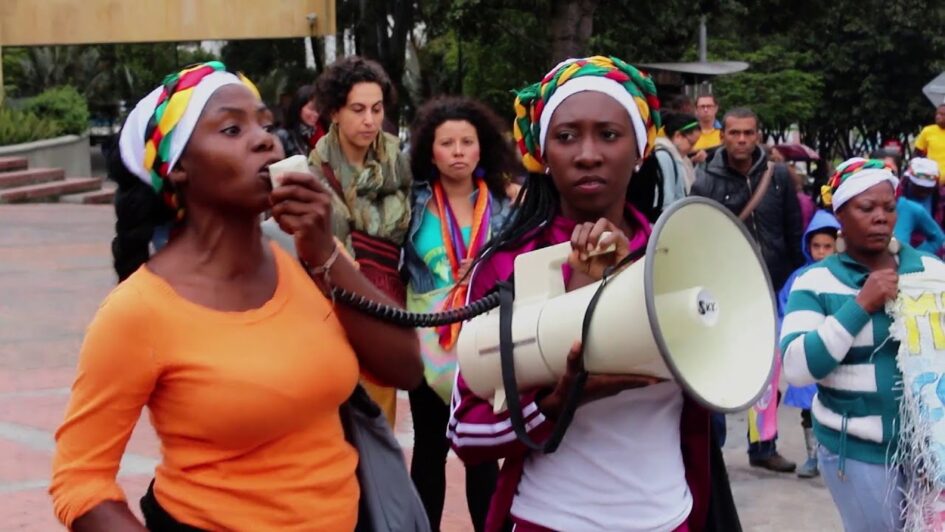 Feminist Movements in Latin America have recently made incredible strides in women’s rights after generations of struggle against a society founded in machismo. When supporting and celebrating progress in Women’s Liberation in Latin America, mainstream media often tends to focus on countries such as Argentina, Chile, and Mexico and the rise of the #NiUnaMenos, (not one more) anti-femicide movement. Although the feminist movements in these countries have been successful in achieving some essential rights for women, with the exception of Mexico, these predominantly white countries are also intentionally centering cis straight white women in the feminist movement, rarely if ever speaking on issues that specifically target Black women while also marginalizing Queer, Gender Non-Conforming, Black and Indigenous Women. In these past few weeks the Feminist movement in Colombia, which has the third largest Black population in Latin America, has been able to achieve the right to abortion, this success comes after over 15 years of struggle against anti-abortion laws. Along with its importance to Women’s liberation, the movement in Colombia is an important example of a Feminist movement founded in Black, Indigenous, and Queer women fighting the abuse and exploitation of women as well as Land.

By overlooking the Feminist struggles being led by Black and Indigenous women in Latin American countries with the highest femicide rates, not only in the region, but the world, we are creating a narrative that leaves out the range of lived experience amongst women while upholding the white supremacist narrative that Black Indigenous Queer women do not exist in Latin America. Black and Indigenous women are on the forefront of war and intense displacement created by neoliberal policies and perpetuated by enforced poverty. It must be amplified in Latin American feminism that the separation of the Black, Indigenous, or Queer identity from one’s identity as a woman, is impossible and that there is no Women’s Liberation without the Liberation of Black Women. Argentina and Chile have both worked hard to maintain the white identity created through racist and violent control and silencing of their own Black and Indigenous population. Many use the false excuse that the limited amount of Black folx in Argentina and Chile is to blame for their lack of diverse Feminism. This is both untrue and invalid, while both countries contain Black communities that are actively fighting for visibility and inclusion, the argument that Argentina and Chile are justified in overlooking issues facing Black and Indigenous women because they lack those populations is completely illegitimate. In an article written by Afro Chilean Maya Doig-Acuña she writes, “As Afro-Chileno community activists emphasize, Afro-descendants have never even been acknowledged on the national census. Such exclusion means that one cannot simultaneously claim Chilean and Black identity.” (Doig-Acuña, 2020). This deliberate exclusion of Afro Chileans and the promotion of “blanqueamiento”, or whitening, in Chile helped cement whiteness as the default identity in Chilean identity and this idea has seeped into there feminist movement as well. If these feminist movements are claiming Women’s Liberation for all of Latin America, it must include Black, Indigenous, and Queer women or it isn’t Liberation. The continuous exclusion of Black, Indigenous, and Queer voices in the Feminism coming out of these counties is evident in its dialogue, statements regarding violence against women, in places like Colombia or Venezuela, coming out of Argentina and Chile often leave out any reference to race or how racial discrimination play a role in violence against Black women.

Currently in Latin America, Black women in Honduras, Dominican Republic, and Colombia are facing violence exacerbated by war, racism, and extreme poverty. This crisis of extreme violence against women is inseparable from the high levels of anti-Blackness on an institutional and social level. This is specifically true in Colombia where Black women living in rural regions of the country are currently trapped in the middle of a civil war, this combined with police brutality and massive displacement has created a noticeably different narrative of feminism in Latin America. Being a Black woman living in an over policed community or through displacement drastically changes the kind of resources you need to escape domestic violence or get and an abortion, as well as your access to them, and Afro Colombian women have made a point of this. In Colombia’s most recent election Francia Marquez, Land defender, feminist, and Queer ally, became the first Black Colombian to run for president in the country’s history. Although she did not win, her contributions to ensuring Black and Indigenous Colombians organized and rallied around legalized access to abortion can not be over looked. The kind of Feminism Marquez is organizing around is grounded in a variety of experiences shared by Afro Colombians and Black folx throughout Latin America. Marquez has been actively fighting against the illegal seizure of Land in her community since she was 13 years old, seeing the impact of the war on young women, including armed women in the resistance, she is also a mother of two Black sons and has become hyper aware of the police induced violence against Black communities. The fact that this is a shared issue amongst many Black women was exemplified during Colombia’s National Strike protests. Incited by right-wing President Iván Duque’s proposal to increase taxes on basic necessities for 42% of Colombians living under the poverty line, the protest quickly revealed how quickly the rights and well being of Black people could come last to capitalist gain. Although the protest stemmed from a tax increase, Black women from Colombia’s most dangerous rural regions had a lot more to confront the Colombian government on. The failure of the 2017 peace accords has perpetuated the lived experience of armed conflict for Black and Indigenous Land defenders, and they continue to be displaced and murdered by private militaries and police, for refusing to give up their Land, at record rates.

The connection between war and racism within the armed conflict, and the reality of being a Black woman is all inseparable, and Afro Colombians like Francia Marquez are creating a Feminism in Latin America that includes this understanding. And although Chile and Argentinean feminist and leaders of #NiUnaMenos movement, are also fighting for the continued liberation of Latin women, it isn’t feminism if they continue overlook Black and Indigenous women in there own communities while simultaneously remaining silent on issues that continue to oppress Black and Indigenous women throughout all Latin America. To truly protect and liberate Black women in Latin America we must move away from the dominant liberal white feminist movement and instead call for the end of neoliberal led armed conflict, racist over policing, and demand Land rights and the redistribution of Land back to Black and Indigenous folx!

Afro-Indigenous People Are Being Forcibly Displaced. The US Is Complicit.

What is anti-capitalist feminism?

Fighting for LGBTQ+ rights in China