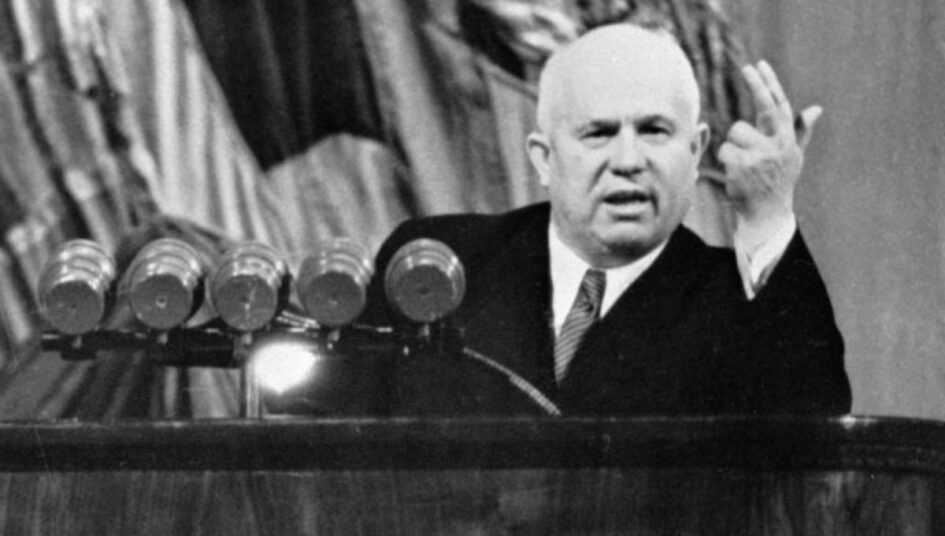 How do you bring down a popular political leader? Well, the Central Intelligence Agency knows: engineer an economic crisis and blame the current administration for it. Apparently, that playbook worked as well in the Soviet Union as it did in Guatemala, Nicaragua or Iran, as the folks who planned the coup against Khrushchev learned.

As the plot to remove Khrushchev unfolded in the summer of 1964, conspirators among his inner circle approached him to convince him to delay reduction of the working week, even while others among the party elite were engaged in sabotaging food distribution throughout the entire Union. By the time it came to getting rid of the old guy, workers were dancing on tabletops with joy, according to one western observer. No sooner had Khrushchev been removed than all the problems mysteriously went away.

The Soviet state had organized its first successful capital strike against the working class.

Here is part of that story according to Khrushchev’s son in his memoir, Khrushchev in Power, published in 2014:

Salary increases, pensions for collective farmers, and the coming reform of the economy were of interest to me, but they really did not affect my life— unlike another issue that was going to be raised at the Supreme Soviet session on July 13 [1964], the transition to a five-day workweek, with Saturdays and Sundays off. I found that of great interest. In those years, we worked seven hours a day, Monday through Friday, and then five hours on Saturday, for a total of forty hours. The plan was to return to an eight-hour day, five days a week, thus adding another full day to the weekend.

At first the idea of two days off in a row aroused no objections, but suddenly, in early July, “insoluble” difficulties came up. People vied with one another to report to Khrushchev that the switch to a five-day week would disorganize the work of many branches of the economy. Special difficulties would arise in sectors requiring continuous operation, as in the metallurgical, chemical, and petrochemical industries. Fears were expressed that although the number of hours worked each week would remain the same, total output would fall if a five-day week were introduced.

However, the session of the Supreme Soviet was only one week away. Father set to work on the final draft of his report.

That summer he was completely preoccupied with the coming reform of the economy, and meanwhile his “closest comrades-in-arms” were completely preoccupied with the question of how to remove him without creating difficulties. For that purpose it was necessary to discredit Khrushchev in the public eye as much as possible, but to do it in such a way that he himself would suspect nothing. The conspiracy entered its decisive phase in the summer of 1964. In July, the cautious Brezhnev even stopped making entries in his notebook. In regions that had leaders with whom Brezhnev had reached “mutual understanding,” goods suddenly disappeared from the stores, especially basic necessities. People had to stand waiting in lines for many hours to obtain almost any commodity, including especially bread. The store shelves were to fill up again only after “the source of all our ills” had been removed. Literally the day after. Of course they did not stay filled up for long.

The granting of pensions to collective farmers and the raising of salaries for some people, though not all—those measures were not helpful for the conspirators’ aims. But there was nothing they could do to prevent them. On the matter of the five-day week, however, they decided to take a chance. They did not want to leave an ace like that in Khrushchev’s hands.

Pressure was exerted systematically from all sides. Dmitry Ustinov, chairman of the All-Union Council on the National Economy, along with Aleksandr Rudakov, the Central Committee secretary in charge of industry, proved to be especially zealous opponents of the switch to a five-day week. I would say that Ustinov was the ringleader, but being an active participant in the conspiracy to remove Khrushchev, he himself did not want to get into an argument with the Soviet premier. Remaining in the shadows, Ustinov had the unsuspecting Rudakov do the work for him. As a result, Rudakov started conversations with Khrushchev about this matter at the Central Committee and submitted relevant reports. Father presented counterarguments and could not be shaken from his views, for a while. The decisive conversation, in my opinion, took place at the Gorki-9 dacha, out on the meadow and in my presence. Rudakov himself was not part of the close circle around Father. He rarely appeared at the dacha, and when he did, it was only on business. He won Adzhubei over to his side, explaining to him that “in the interests of the state” it would be better to put off the five-day week. Adzhubei undertook the task of convincing his father-in-law.

One evening during the week before the session of the Supreme Soviet, Father, Adzhubei, and I were walking in the meadow. For the whole length of the walk, Adzhubei, with his characteristic eloquence, kept arguing that the switch to the five-day week was not well timed; it had not been properly prepared, and could result in serious negative consequences. At first Father listened in silence. Then he gradually began to give way. Adzhubei was finding effective arguments. At this point I decided to intervene. I very much wanted those two days off and didn’t want to lose them, so I made some modest objections. They came out awkwardly, and Father waved me away: “Don’t interfere!”

In the end he gave up and let himself be persuaded. Adzhubei beamed. At the July 11 plenum of the Central Committee, Father explained this decision, repeating the arguments of Rudakov-Ustinov: “We also wanted to bring up the question of switching to a five-day workweek, but after thinking it over in the CC Presidium, we changed the decision. For now, our country is not yet ready, although a five-day week is very tempting.” It was as though he were trying to justify himself in the eyes of the Central Committee members. “Problems arise in mining, where two days’ absence from the ‘drifts,’ the smaller tunnels connecting the mineshafts, could result in a weakening of the roofs.”

Also it was not clear “what would happen with schoolchildren. We can’t leave them with a six-day school week if their fathers and mothers have two days off. If the schools are switched to a shorter week, then the school year as a whole would have to be lengthened. And that’s impossible.”

“Let’s not be too hasty about the five-day week, comrades. Let’s think it over, study it, and consult about it. No one is asking us to hurry.”1

After Khrushchev’s ouster, the “insoluble” problems of the five-day week disappeared of their own accord. No longer did anyone’s hair turn gray over the “drifts connecting the mineshafts.” And the schools got by without lengthening the school year. In the fall of 1967, Brezhnev presented the gift of two days off, as though it were his personal gift to the Soviet people on the fiftieth anniversary of the October Revolution.