How the West made Putin 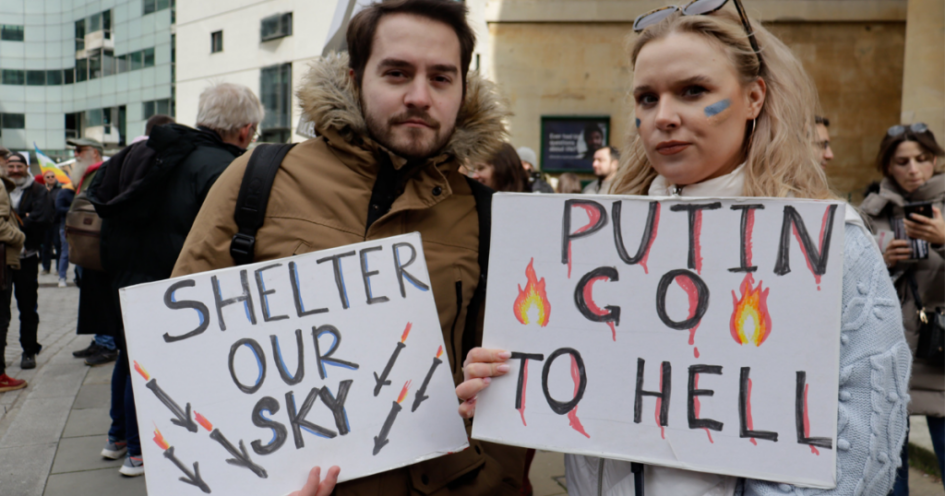 Writer and rs21 member Anindya Bhattacharyya charts a recent history of links between Putin and key figures in Western ruling classes – some of whom are now in the vanguard of warmongering against Russia. Solidarity with Ukrainians in their fight against Russian aggression means resisting our rulers everywhere through a new internationalism.

This article is republished from voice.wales.

The grim news and footage emerging from Russia’s invasion and levelling of Ukraine have been accompanied by another dismal spectacle – the shrieking 24-hour moralism of warmongering voices in Western political and media circles. Vladimir Putin is the new Hitler, we are told, or even worse than Hitler, as a pundit on MSNBC recently opined.

Britain’s Tory government has unsurprisingly joined this chorus, no doubt welcoming the opportunity to put Boris Johnson’s troubles on the back burner in the spirit of national unity. And Keir Starmer has predictably obliged, withdrawing his previous call for Johnson to resign, while ratcheting up his battle against remnants of the left in Labour.

This loudly declared full spectrum opposition to Putin and all things Russian is occasionally punctured by an embarrassing revelation. There’s no shortage of examples of the recent willingness of political operators – Tory and Labour – to service the Russian super-rich.

Not that the press is that much better. Private Eye reports on how the Daily Telegraph would rake in an estimated £500,000 a year to publish its ‘Russia Beyond The Headlines’ supplement – copy supplied by Russia’s state news agency. This arrangement, dating back to 2007, has been hastily terminated and the content removed from the Telegraph website.

Things were very different 20 years ago. A Times editorial from 2002 praised Putin for ‘the mastery he has acquired in office for intelligent consensus-building’. The context was Putin’s backing for the NATO invasion of Afghanistan in return for Western endorsement of his brutal campaign to crush Chechnya’s separatist movement.

Just a few weeks previously Tony Blair and his press secretary Alastair Campbell had visited Putin in one of his country houses. They dined, drank vodka and played snooker, according to press reports at the time. The deal was sealed – the Chechens were rebranded as ‘Islamist extremists’ and their suppression by Russia retrospectively folded into the’war on terror’.

Campbell for one has tried to justify this by arguing that 20 years ago Putin was a different beast – liberal minded, friendly and open to the West, but enough of a strongman to tame the neoliberal jungle of the Russian economy, which had been decimated with Western connivance under Putin’s predecessor Boris Yeltsin.

But as Campbell’s own account attests, Blair was all too aware of how Putin had secured his political power in Russia through massacres and war crimes in Chechnya. The difference between the bad Putin today and the good one two decades ago wasn’t a new found bloodlust or inclination to bomb civilians. The difference was simply his change in attitudes towards Western imperial interests.

Blair’s wooing of Putin was almost universally applauded by the media at the time. But there were a few people voicing criticisms. Jeremy Corbyn, then a backbench Labour MP, would regularly speak out to condemn Putin’s crimes in Chechnya. It was Corbyn who criticised Blair for cosying up to the regime, Corbyn who raised the issue of oligarch money sloshing around London, Corbyn who opposed the extradition of Chechen opposition figures from Britain to Russia.

Yet today the very same political forces that cheered on Blair’s disastrous wars – and lauded Putin as a moderate we could do business with – casually smear Corbyn as some sort of Kremlin apologist. Meanwhile Blair as recently as 2014 was still urging the West to ally with Putin in the fight against radical Islam – and indeed the West and Russia did ally to put down the uprisings in Syria against Bashar al-Assad’s regime.

The point here isn’t simply that the political establishment in Britain – whether Tory or New Labour – are ruthless hypocrites every bit as venal as Putin. It is rather that both are products of a global order of gangsters. Putin explicitly told Blair in 2003 that the Iraq invasion had demonstrated that there were no laws when it came to war: ‘The US thinks they can do what they want. Others have to operate by the rules – but not them.’

The danger is hideously clear. We live in a world carved up into rival territories, each ruled by its own caste of gangsters, all armed to the teeth. The US and its allies are the biggest gangsters of the lot – but they are in decline, and sore from decades of fruitless military expenditure in Afghanistan and the Middle East.

Add in global crises such as climate change and the pandemic, and you have a situation that could all too easily explode into a disastrous and protracted world war – as it did a century ago when a previous round of imperialist build-up marched to a bloody conclusion.

The only way of closing down this deadly possibility is to close down the system of militarised and nationalist competition that produced it. And that means a new internationalism, built on the best traditions of the past that unites the working people of all nations against their respective gangsters. Here in Britain, that means supporting the anti-war movement in Russia, solidarity with those fleeing and trapped in Ukraine – but also a consistent, unrelenting opposition to NATO and Western militarism.

Anindya Bhattacharyya is a writer and activist based in London, on Twitter at @bat020

The Washington Post Publishes a Commentary Full of Lies Against Putin

Putin’s Invasion: Imperialism after the epoch of Lenin and Wilson

Putin’s War in Ukraine and the Refugee Crisis