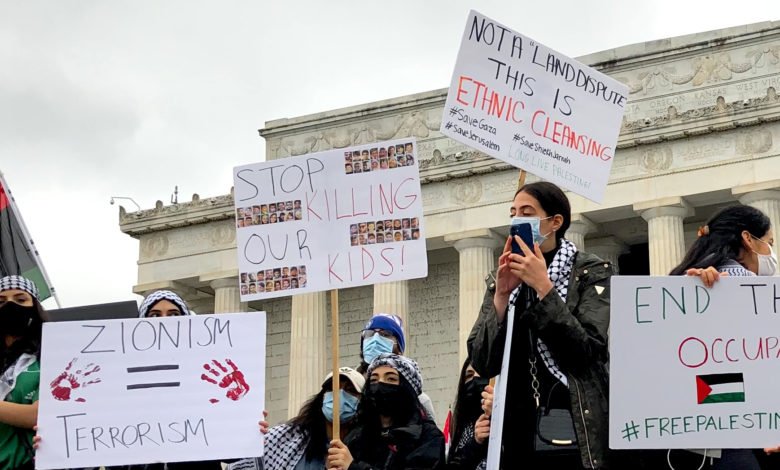 In May, the world witnessed Zionist settlers like Justin “Yaakov” Fauci terrorize and occupy the homes of Palestinians living in the Sheikh Jarrah neighborhood of East Jerusalem. Less known is the role played by U.S.-based non-governmental organizations in funding this ethnic cleansing.

In addition to supplying almost $4 billion in direct aid annually, the U.S. government allows — and actually grants tax-exempt status to — NGOs raising money here for Zionist settlements dedicated to pushing Palestinians off their land. Many of the groups are incorporated in New York State. The tax-exemption serves as a hidden subsidy that violates domestic and international law.

A new Palestinian-led organization, Defund Racism, was formed in September to expose these funders of settler colonialism and to build a movement to shut them down.  It calling on New York State Attorney General Letitia James to revoke the 501(c)(3) status of New York-based NGOs that are raising money for the Zionist settler movement.

A July 27 demonstration called by Al-Awda and the NY4Palestine Coalition outside the Long Island home of Fauci (who is a U.S. citizen) and the office of New York State Attorney General Letitia James also demanded the revocation of 501(c)(3) status for groups which back settler-led genocide in Palestine. During the demonstration, human rights attorney Lamis Deek pointed out, “It is a violation of U.S. federal law for Americans to engage in war crimes and genocide.”

Five days prior to the Long Island demonstration, several members of the U.S. House of Representatives penned a letter to treasury secretary Janet Yellen expressing concern “that these policies violate U.S. obligations under international law, as well as federal tax law.”

Any post-1967 encroachments onto Palestinian territory counter international law. In addition, any use of tax-exempt funds to breach international law is by definition a violation of U.S. charitable law as it applies to 501(c)(3) organizations.

What is being raised was never small change, and it is increasing. A 2015 investigation by the Israeli newspaper Haaretz found that from 2009-2013, U.S. non-profits sent over $220 million to Israeli settler organizations in the West Bank. This money came from 50 or so U.S. groups. Defund Racism points out  “from 2014 to 2019, a handful of organizations had $319,921,483 in gross receipts.”

The NGOs who bankroll ethnic cleansing of Palestinians

What follows is a few examples of what they do.

The Central Fund of Israel provides a majority of the funding for a settler group called the Israel Land Fund. The ILF was started in 2007 by Jerusalem deputy mayor and settler Aryeh King. King boasted to the Jerusalem Post in 2017 about plans to replace Palestinians living in Sheikh Jarrah with 400-500 Jewish families over the next several years. In 2017 the ILF helped evict a Palestinian family in Sheikh Jarrah,  currently an epicenter of Palestinian resistance in East Jerusalem. According to their own website, the ILF is selling Palestinian land for $12,500 per dunam (about 900 square meters).

Speaking about the ILF, Defund Racism says, “It advertises housing opportunities as ‘ideology properties, and provides legal assistance to settlers to displace Palestinians. The organization describes itself as founded in response to ‘the danger’ of ‘more and more Arabs and non-Jews living and owning land all over Israel.’ The mission is therefore explicitly discriminatory, as the Israel Land Fund exists solely to prevent the sale of land to non-Jewish people.”

From 2017 to 2019, the Hebron Fund collected between $2.2 million and $2.4 million. In 2019 it granted $1.7 million, presumably to the settlement movement in Hebron. While there is little public information available on the Hebron Fund’s donors, Defund Racism did discover that in 2016, Goldmann Sachs donated $18,000, and in 2017 the Irving Moskowitz Foundation, a well-known funder of other settler organizations, gave the Hebron Fund $300,000.

Jewish settlements in the West Bank are illegal under international law, but legal according to Israeli law. Friends of Itamar, founded in 2007, finances settler “outposts” that are illegal even under Israeli law. The outposts often host a small population and include mobile homes that are disconnected from Israel’s general infrastructure. Some outposts, however, have tens of thousands of settlers and many are protected by the  Israel Defense Forces .

U.S. non-profits even directly fund the Israeli military. A 2016 lawsuit waged by U.S. citizens points out that the IDF was handed $60 million in a single month from Friends of the IDF. Donated funds have been used to purchase high-grade military gear and weapons for civilian settlers. Guard dogs have been bought and trained using these funds; “sniper schools” have been set up as well.

Friends of Ateret Cohanim provides approximately 60% of the funding for a settler organization called the Jerusalem Reclamation Project of Ateret Cohanim. This group aims to creat a demographic majority of Israelis in East Jerusalem by forcing out the Palestinians. Daniel Luria, Executive Director and International Spokesman of Ateret Cohanim details the work of the organization as “doing ideological real estate,” according to Defund Racism.

In 2010, executive director of Israeli group Peace Now Settlement Watch Project, Hagit Ofran, told the Inter Press Service , “Without the substantial support of millions of tax-exempt dollars from the U.S., and elsewhere in the world, Israeli NGOs such as Elad and Ateret Cohanim which finance the construction and expansion of settlement building in East Jerusalem would be restricted.”

Worth noting is that funds are not only coming in from NGOs based in the U.S. Between 2006 and 2013, far-right Israeli NGO Elad received over $115 million from companies registered in tax havens like the Virgin Islands, Bahamas and Seychelles, where their names do not have to be disclosed.

While enabling the funding of illegal Zionist settlements and settler terrorism, the U.S. government has shut down and even arrested organizers of charities that would assist many who were the victims of Israeli terror.  This is what was done to the Holy Land Foundation.

The HLF was the largest Islamic charity organization in the U.S. They raised money to provide aid primarily for Palestinians throughout the Arab world who suffered from natural and man-made disasters. In 2001 the HLF was falsely accused of funding Hamas by the U.S. government, which had placed the group on its “terrorist” list for opposing U.S. and Israeli policy. The HLF’s assets were seized by the FBI.

The main evidence cited for HLF ties to Hamas was that the cousin of an HLF activist married a Hamas member. However, the HLF even raised money for families who were accused by Hamas of working with the Israeli government.

During the second trial (the first resulted in a hung jury), no evidence was presented that actually linked the HLF to Hamas. The prosecution relied on anonymous testimony from an Israeli intelligence agent, violating the right of defendants to face their accuser. After an arduous legal battle, five founders of the HLF were given prison sentences ranging from 15 to 65 years for “funneling $12 million to Hamas.” In 2011 the U.S. court of appeals upheld the conviction and sentences.

The political prisoners, known as the Holy Land Foundation Five, are still incarcerated in U.S. jails. The struggle for their freedom and the liberation of Palestine continues.

To join the struggle to shut down pro-settlement U.S.-based NGOs, contact Defund Racism.

Information on how to help free the incarcerated Holy Land Fund Five  can be found here.