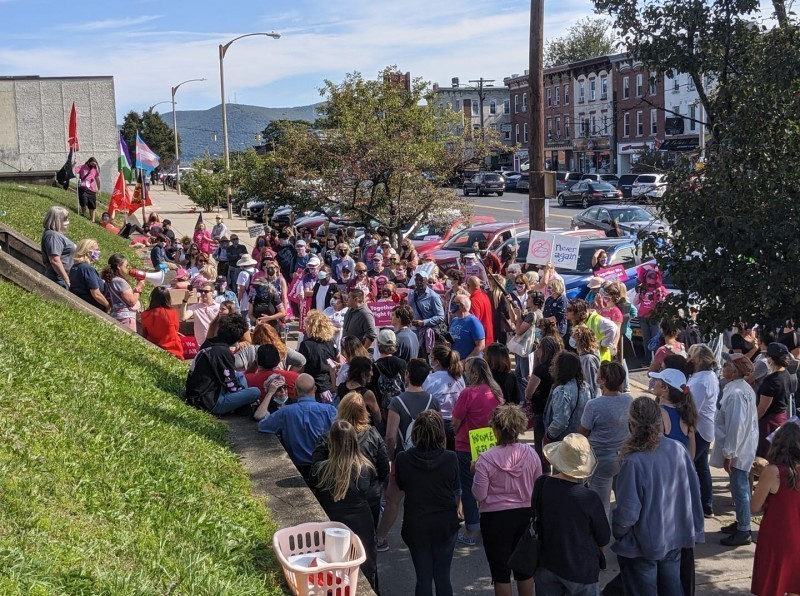 Newburgh, NY – In Newburgh, 120 gathered at the steps of the courthouse. In New Paltz, on Main Street, 100 stood in front of Elting Library. In Poughkeepsie there were 75. In Kingston, another 150. Woodstock 100. Across the Hudson Valley we took the streets. There were actions in towns, villages and hamlets as we joined the over 650 marches taking place across the United States.

It has been a long time coming but on October 2, we gathered demanding reproductive freedom for all and support for women’s liberation.

On September 1, abortion became illegal in Texas except in the very earliest stage of pregnancy and this had a ripple effect as the religious right is planning to introduce similar legislation across the U.S.

Similarly, the Supreme Court decision to allow this law to take effect is likely a sign that it could soon overturn Roe v. Wade directly and remove from American law the concept of a constitutional right to abortion and endanger the rights for women.

Key activists in the queer liberation movement, Planned Parenthood and community organizers have been mobilizing for weeks, planning for the October 2 national day of action.

In Newburgh, New York we marched from the courthouse on down to the waterfront. Newburgh is approximately 90 miles north of New York City and a part of the Mid-Hudson Valley. More than 50% of the city is Hispanic or Latin American, largely from Puerto Rico, Mexico and Cuba. 45% of the population speaks English as a second language, 60% live below the poverty line and 85% live at the poverty line.

The March was spirited, chanting, “Abortion is healthcare” and “My body, my choice! We are pro-choice.” Many people had taken time to make handmade signs with glitter and lots of great artistic flourishes. A young goth held a sign that referenced the Olivia Newton-John John Travolta movie Grease with the slogan “Keep your filthy laws off my silky draws”

An educator from a nearby town said in a conversation, “Queer rights are reproductive rights. Not everyone who gets pregnant is a woman.” Other signs referenced the gentrification taking place in towns like Newburgh, Poughkeepsie and Kingston and the movement against police brutality.

October 2 will be regarded as a benchmark where our movement made an important stand. Now the task is to build on this energy and continue the fight. As it says in the Freedom Road Socialist Organization statement, “We call for all progressive people build for and support demands to overturn this law, keep Roe v. Wade in place and work to maintain our freedom to have or not have children in the timing and manner that works for us. This is not just a question for Texas, it impacts us all.”