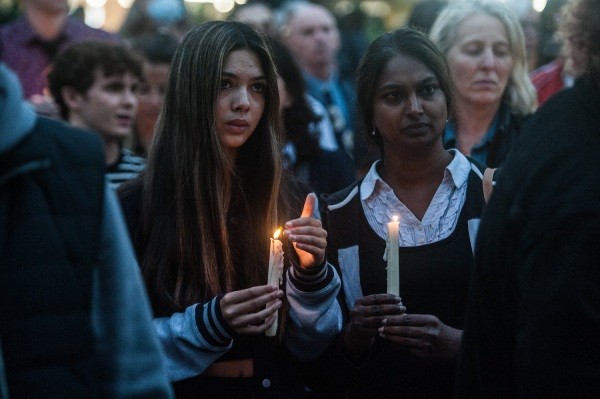 Up to 1,000 people joined a vigil in south east London on Friday night after teacher Sabina Nessa was killed last week.

Hundreds of people joined other vigils in towns and cities across Britain—and more are planned in the coming days.

Agnes, who lives in the area, said she was shook when she heard about the murder of Nessa, who had been walking to the pub to meet a friend. “After something like this happens you get a reality check,” she told Socialist Worker.

“You realise, as a woman, you aren’t safe.

“How is it that despite gains that have been made are we still being killed in such high numbers?”

Ellie told Socialist Worker that she is angry that women are always told it’s their fault for the violence they face.

“We’re always told it’s us,” she said, “what we did or how we dress that led us to being attacked or killed.”

Agnes added that it was important for people to have an outlet for their anger, not just their grief. “Being at a vigil with a lot of people helps,” she said.

“I think vigils like this—but also protests—are a way for people to express their feelings and also feel stronger together.”

Ellie and Agnes agreed that race has a massive role in the initial lack of reporting of Nessa’s killing.

It is worth recalling Sarah Everard’s murder—by serving cop Wayne Couzens—in March and the subsequent vigil on Clapham Common which was met with brutal police repression.

The wave of protests that followed were not just a response to the murder of a woman. They were a reaction to the violence and institutional sexism of the Met police.

The murders of Nessa and Everard should be a call to action for everyone to battle against a sexist system and the state that maintains it.

Sexism comes from the system

Violence and harassment are still the reality for many women. At least 106 women have been killed by men, or where a man is the principal suspect, in Britain so far in 2021.

But those in the women’s liberation movement are often divided about where sexism comes from, and how we fight it.

Some feminists believe that there is something intrinsic within men that causes them to be violent.

This assumes all women are on the same side and have the same class interests under capitalism.

It is true that individual men carry out appalling acts.

But the sexist violence that led to the killing of Sabina Nessa is rooted in the system we live under.

In a system run for profit, women are sexualised and dehumanised.

This creates the illusion for some men that they have a right to women’s bodies—leading to sexual harassment and violence.

Oppression originates at the top of society and is used to preserve women’s subordination within wider society.

Creating myths that women are naturally passive and nurturing justifies women taking on free domestic labour and childcare in the home—and lower pay in the workplace.

To fight sexist violence, we must take on the same system that creates it.

We must fight for reforms to make women safer, but we must go further than just winning some changes within the system.

Capitalism, which relies on women’s oppression, has to be taken apart

[Poster] Join the Fight for Socialism in Our Lifetime!